Unexpected use of drones

Is it possible to beat commute traffic, by traveling in 3D, with drones?

Let's say you weight 90 pounds. How many drones would you need to get you airborne? If each drone can carry 30 pounds, you would think 3 drones is enough. Next question: how do you synchronize these drones so that they don't crash in each other and drive you to your target destination? 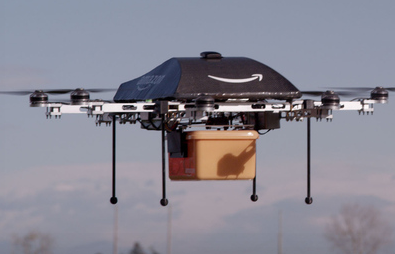 Another question: why don't you ever see 3 or 4 helicopters coordinated to carry a weight too big for any single one to lift? I would think that the engineering (including data science) to make this happen is trivial. Or am I missing something?

Note: Many experts claim that getting 4 drones to lift a package is way too dangerous. But what if the 4 drones were connected by light, flexible plastic pipes to prevent them from crashing into each other (by keeping them always at the same distance from each other)? Another solution is to have one drone be the boss, and use an optimal geometric 3D configuration of these drones to maximize stability. After all, 200 relatively small helium balloons can lift a guy, there's no reasons 4 drones can't do the job.

Have you seen the Ted video of 3 cooperative quadracopters? those guys could do it.

What about people crossing the border with drones, and bypassing check points? Or drugs/weapons illegally moved out of country with drones?