Great example of clustering and visualization, posted here. The original article offers a much bigger picture, 10 times more info than in this little post, and even an interactive chart. Note that both @datasciencectrl and @analyticbridge are listed in the top 10 influencers.This project is hosted on the NodeXL graph server, where you van create your own graphs. Enjoy!

Below are explanations provided by the original author:

The graph represents a network of 2,719 Twitter users whose tweets in the requested range contained "datascientist", or who were replied to or mentioned in those tweets. The network was obtained from the NodeXL Graph Server on Saturday, 09 January 2016 at 19:19 UTC. 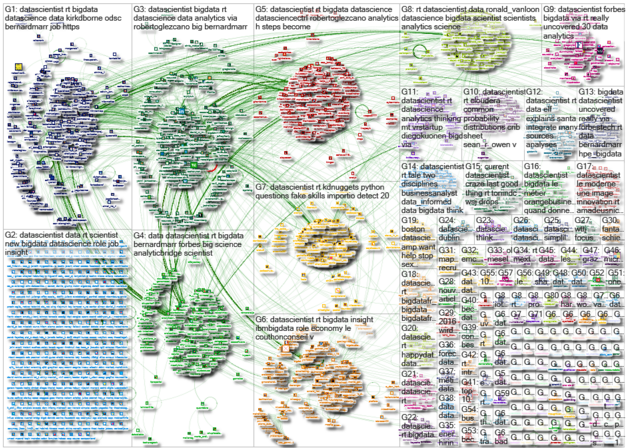 The graph is directed.

The graph's vertices were grouped by cluster using the Clauset-Newman-Moore cluster algorithm.

The graph was laid out using the Harel-Koren Fast Multiscale layout algorithm.