Here are a few off-the-beaten-path problems at the intersection of computer science (algorithms), probability, statistical science, set theory, and number theory. While they can easily be understood by beginners, finding a full solution to some of them is not easy, and some of the simple but deep questions below won't be answered for a long time, if ever, even by the best mathematicians living today. In some sense, this is the opposite of classroom exercises, as there is no sure path that leads to full solutions. I offer partial solutions and directions, to help solve these problems. 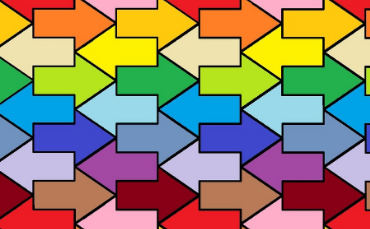 Here we try to construct an irrational number x that has 50% of zero's, and 50% of one's, in its binary representation (digits in base 2.) To this day, no one knows whether any classic mathematical constant (Pi, e, log 2, SQRT(2) and so on) has such a uniform distribution of 0 and 1 in base 2, or any other base. The number is constructed as follows. Let us denote as S(n) the set of strictly positive integers that are divisible by p(1) or p(2) or ... or p(n) where the p(k)'s are prime numbers to be determined later. We formally define x as the limit, when n tends to infinity, of x(n), with

The prime numbers p(1), p(2) and so on, are chosen such that x has 50% zero's, and 50% one's, in its base 2 representation. Which prime numbers we should choose is a relatively easy problem, achieved using a version of the greedy algorithm as follows:

Now we have an algorithm to find the p(k)'s. It is easy to prove (see here) that the proportion of 1 in x(n), denoted as r(n), is equal to

Note that this formula is correct only if the p(k)'s have no common divisors (why?), thus our focus is on prime numbers only. The fact that the above product, if taken over all prime numbers rather than those few that we picked, is diverging, actually guarantees that we can grow our list of primes indefinitely, and at the limit as n tends to infinity, have r(n) tends to 50%, as desired. In short, prime numbers are abundant enough for this to work, while squares of prime numbers would be too few for this to work (the above product, if taken over all squares of prime numbers, converges, causing the problem). Also note that for any fixed value of n, x(n) is a rational number and can be computed explicitly.

The answer to the last question is no. The digits exhibit strong auto-correlations, by construction. It is also easy to prove that x is not a normal number, since sequences of digits such as "100001" never appear in its base 2 representation.

Again, the purpose here is to construct an irrational number x between 0 and 1, with the same proportion of digits equal either to 1 or 0, in base 2. I could call it the infinite mirror number, and it is built as follows, using some kind of mirror principle:

The number x, defined as the limit of x(n) as n tends to infinity, share a few properties with the number discussed in the first problem:

Is x is a rational number? I could not find any period in the first few hundred digits of x in base 2; it makes me think that this number is probably irrational. Can you compute the first 10 decimals of x, in base 10?

Finally, the digit 0 (in base 2) appears in the following positions:

Do you see any patterns in that sequence?

Another number with digits uniformly distributed, although in base 10, is the Champernowne constant, defined as 0.12345678910111213... That number is even normal. Yet unlike Pi or SQRT(2), it fails many tests of randomness, see the section "failing the gap test" in chapter 4 in my book. Rather than using the concept of normal number, a better definition of a number with "random digits" is to use my concept of "good seed" (discussed in the same book) which takes into account the joint distribution of all the digits, not just some marginals. Note that for some numbers, the distribution of the digits does not even exist. See chapter 10 in the same book for an example.

Analyze the digit distribution, in base 2, of the following numbers:

3. Representing Sets by Numbers or Functions

If S is a set of strictly positive integers, one might characterize S by the number f(S) = x, defined as follows:

However, this approach has some drawbacks: for instance, f({1}) = f({2,3,4,5,6,...}) = 1/2. In short, all finite sets have a number representation that is also matched by an infinite set. How can we walk around this issue? If instead of using the representation using the base 2 system as above, we use the logistic map representation (see chapter 10 in my book), would this solve the issue? That is, in the logistic map numeration system, where digits are also equal to either 0 or 1, can two different sets be represented by the same number?

Another interesting issue is to study how operations on sets (union, intersection, hyper-logarithm, and so on) look like when applied to the number or real-valued function that characterize them.

The next tricky question of course, is how to represent sets of real-valued functions, by a mathematical object. There are not enough characteristic functions, by far, to uniquely characterize these sets. Operators, a branch of functional analysis, might fit the bill. These are functions whose argument is a function itself, such as the integral or derivative operators. Finally, what kind of mathematical object should you use to uniquely characterize any set of mathematical operators? Obviously it will be some kind of mapping, let's call it meta-operators, that have as argument, an operator. At this point, it is becoming extremely theoretical and abstract.

Back to the problem of representing a set S of strictly positive integers, by a real number x = f(S). Consider the following representation:

What are the pluses and minuses over the solution proposed at the beginning of this section?

Answer: all sets have a unique number attached to them, but some numbers, for instance any number strictly between 1 and e-1, do not represent any set. Note that if for instance, you consider the set S of numbers that are multiple of 3, you get a beautiful result for x = f(S): see here for details. The result is

Thanks Jose for your great insights!

It's an auto-replicating algorithm with feedback.

If you create groups with 4 elements, you will see that increments are of the kind:

Then you get the following sequence :

Then you get the auto-replicated sequence:

A,B,B,A,B,A,A,B... which gives feedback to the original sequence.

Hi Jose, what is the pattern that you see?

Hello, I see a pattern in the sequence :