Here we discuss a new system to represent numbers, for instance constants such as Pi, e, or log 2, using rational fractions. Each iteration doubles the precision (the number of correct decimals computed) making it converging much faster than current systems such as continued fractions, to represent any positive real number. The algorithm discussed here is equivalent to the greedy algorithm to compute Egyptian fractions, except that we use it here mostly for irrational numbers. 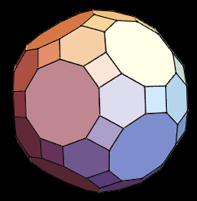 For any real number x, the representation is as follows:

where the integer numbers p(k) are computed iteratively with the following two-steps iteration, starting with k = 1:

where the brackets represent the floor function which always returns an integer. You start with a seed p(1) = 1 (though you can work with other seed values) and loop over k = 1, 2, and so on. As k tends to infinity, x(k) tends to x. The speed of convergence is remarkable, yielding 14 decimals after five or six iterations, and doubling the precision at each iteration, because p(k+1) is of the same order of magnitude as the square of p(k). It works well if x is between 1 and 2,

Here are a few interesting examples:

The sequence p(1), p(2), and so on uniquely characterizes the number x. Note that for k as small as 6 or 7, p(k) becomes so large that you need to use special arithmetic (long numbers) to perform the computations in any programming language, as you have reached the limit in terms of computer precision.

General framework and proof of convergence

This methodology generalizes as follows: Start with a value p(1) with x > 1 / p(1), and iteratively compute p(k+1) as the smallest number from an infinite set E of positive numbers, such that x(k+1)   <  x, with

If a number x produces a sequence p(k) such that p(k+1) is asymptotically equivalent to the square of p(k), it is easy to prove that p(k) is asymptotically equivalent to c^(2^k) where c is a constant depending on x. Here the notation a^b means a at power b. The following formula is easy to obtain, and applies to the above constant c associated with the Sylvester sequence; it provides a pretty good approximation for c, even with values as low as k = 5 or 6:

Note that E could be any set of strictly positive numbers (for instance, prime numbers, or numbers that are not even integers), as long of the sum of the inverse of the elements of E, is infinite.

The coefficients p(k) could be used to build random number generators. Finally, a similar methodology can be developed to represent numbers as infinite products, click here for details.

For a simple recursion yielding all the binary digits of the square root of 2, one at a time, click here. For another interesting challenge, read the section "Potential Areas of Research" in my article How to detect if numbers are random or not. For other articles featuring difficult mathematical problems, click here. For a statistical problem with several potential applications (clustering, data reduction) click here and read the last section. More challenges can be found here. .