This should remind you of your probability classes during college years. Can you solve this problem in 30 minutes? This could make for an interesting job interview question.

Points are randomly distributed on the plane, with an average of m points per unit area. A circle of radius R is drawn around each point. What is the proportion of the plane covered by these (possibly overlapping) circles?

What if circles can have two different radii, either R = r, or R = s, with same probability? What if R is a random variable, so that we are dealing with random circles? Before reading further, try to solve the problem yourself. 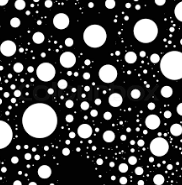 The points are distributed according to a Poisson point process of intensity m. The chance that an arbitrary point x in the plane is not covered by any circle, is the chance that there is zero point from the process, in a circle of radius R centered at x. This is equal to exp(-m p R^2). Thus the proportion of the plane covered by the circles is

If circles have radii equal to r or s, it is like having two independent (superimposed) Poisson processes, each with intensity m / 2, one for each type of circle. The chance that x is not covered by any circle is thus a product of two probabilities,

If R is a positive random variable and E denotes its expectation, then the general solution is

You can easily simulate a large number of these circles over a broad area, and then, pick up 1,000 random points and see how many of them are covered by at least one circle, to check whether your solution is correct or not. You can also use these simulations to get an approximation for exp(-p).

The formula for p(m,R) and confidence intervals obtained for its value via simulations under the assumption of pure randomness (Poisson process), can be used to check if a process is really random. For instance, are Moon's craters spread randomly? They might not, if large meteorites break up in small pieces before impact, resulting in clustered craters. In that case, the area covered by the (overlapping) craters might be smaller than theoretically expected.