Crossing the AI Chasm with Infographics

AI is a game changer. Period. And being a data and analytics guy, I could not be more excited about it.

The McKinsey research study “Notes from the AI frontier: Applications and value of deep learning” provided some valuable insights into where and how Artificial Intelligence (i.e., Deep Learning / Neural Networks (CNNs, RNNs, GANs), Reinforcement Learning and Deep Reinforcement Learning) will derive and drive new sources of customer, product and…

Creating Assets that Appreciate, Not Depreciate, in Value Thru Continuous Learning – Part II

OK, I realize it’s on me for not explaining it well. Let me try again at explaining this game-changing concept of leveraging massive amounts of operational data with Artificial Intelligence (AI) and Deep Learning to create assets that appreciate, not depreciate, in value through usage.

What Elon Musk is saying is that Tesla…

2020 Forecast: Turning IT into a Profit Center

Data is a unique economic asset; it never depletes, never wears out and can be used across an unlimited number of use cases at near zero marginal cost. Data in the hands of management and operational leadership can be used to drive material, financial, operational and customer impact.  And maybe the best part of this winning data equation? You already own the data! But unfortunately, data is the Rodney Dangerfield of corporate assets – it gets no respect!

Industry Averages, Benchmarks and the Death of Innovation

Sustaining industry averages and benchmarks are the antithesis of innovation and a great way to ensure average performance. Doing whatever everyone else is doing is a “paving the cow path" management mentality, lacking aspirational goals which are critical for organizations to fuel innovation and create customer and market differentiation. Which brings me to why I teach.

As my students and I work through their “Thinking Like a Data Scientist” exercises together, I always learn…

How AI Is Manipulating Economics to Create Appreciating Assets

Think about that statement for a second…you’re buying an appreciating asset, not a depreciating asset. And what is driving the appreciation of that asset?  It’s likely courtesy of Tesla’s FSD (Full Self-Driving) Deep…

Recessions, Big Data, Data Science and Liberating Power of “Own It”

There, I said it.  I said the “R” word.  And no, I’m not talking the political “R” word.  I’m talking about the potential of a… r-e-c-e-s-s-i-o-n.  There are many indicators pointing to the potential of a worldwide recession, and unfortunately during a recession, many organizations hunker down, cut spending, and try to ride it out – all the wrong things to do if you want to actually avoid a recession.…

One of the biggest threats to our world economy (outside of climate change, social inequality, unregulated proliferation of weapons and the rise of Terminators), is the retirement of the technician and engineering expertise that is necessary to keep our factories, hospitals, cities, trains, airports and other operational entities running effectively.  Deloitte’s 2018 skills gap in manufacturing study found that the skills gap may leave an estimated 2.4 million positions unfilled…

Fortunately, the “3 Horizons of…

Digital Transformation Horizon 1 to Horizon 3:  When Is Innovation Really Innovation?

In the early 2000’s, IBM Deep Blue was on the lookout for its next Grand Challenge.  It had achieved an exhilarating win over chess grand master Garry Kasparov in 1997.  But that was a game with deterministic outcomes where superior processing power gave Deep Blue a significant advantage over even a human grand champion.  IBM needed a challenge commiserate with its Artificial Intelligence aspirations, and the wildly popular TV game show…

Why Utility Determination Is Critical to Defining AI Success

There seem to be countless articles projecting the incredible economic and social growth that will be driven by AI.  For example, PwC predicts that AI technologies and applications will increase global GDP by up to 14% between now and 2030 (see Figure 1). 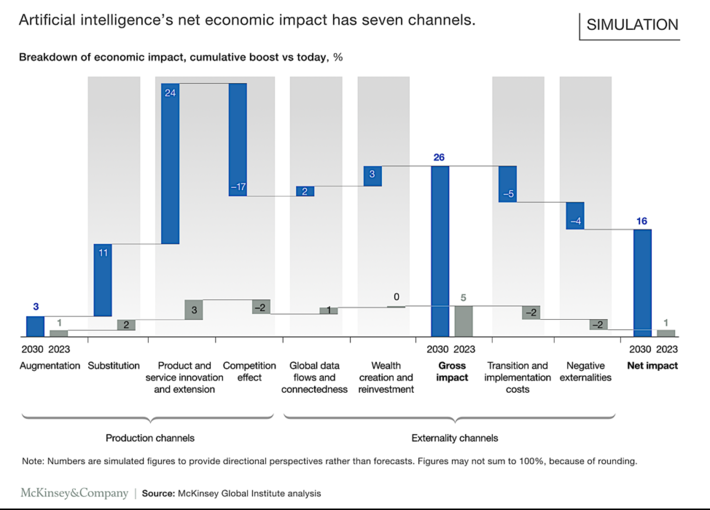 Digital Transformation: Preparing your Organization for a World of Constant Change

“It is hard to teach an old dog new tricks.  They’ve only been in business for 155 years.”
– Anonymous

They say that the best ideas sometimes come to you while you are in the shower, and this idea of how to explain two important Neural Network concepts – Backpropagation and Stochastic Gradient Descent – actually did come to me as I was trying to set the perfect water temperature for my morning shower.

I hate it when I hear senior executives state that they want to become data-driven, as if somehow having data is value in of itself.  Now, one can hardly blame the unenlightened executive whose only perspectives on data are associated with statements like “Data is really the new oil” (Wall Street Journal) or “…

How AI/ML Could Return Manufacturing Prowess Back to US

I grew up in a small manufacturing town in Northeast Iowa.  The factory in my hometown made tractors (no surprise given that it was Iowa), but eventually the economics of cheap foreign labor and an interconnected global economy caught up with that factory – as it did with many US-based manufacturers – and soon the factory closed, and many people were laid off.

But the technology world continues to evolve – especially with respect to IoT, Data Science and AI/ML – and so…

There is a phrase in baseball about pitchers “pitching through pain” that refers to pitchers taking the mound to pitch even though they have aches and pains – sore arms, stiff joints, blisters, strained muscles, etc. The idea is that these pitchers are so tough that they can pitch effectively even though they are not quite physically right.

However, when the human system is asked to do…

I originally wrote in “Transforming from Autonomous to Smart: Reinforcement Learning Basics” how…