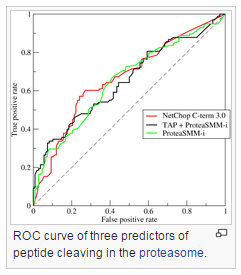 ROC curve. Unlike the lift chart, the ROC curve is almost independent of the response rate. The receiver operating characteristic (ROC), or ROC curve, is a graphical plot that illustrates the performance of a binary classifier system as its discrimination threshold is varied. The curve is created by plotting the true positive rate (TPR) against the false positive rate (FPR) at various threshold settings. The true-positive rate is also known as sensitivity or the sensitivity index d', known as "d-prime" in signal detection and biomedical informatics, or recall in machine learning. The false-positive rate is also known as the fall-out and can be calculated as (1 - specificity). The ROC curve is thus the sensitivity as a function of fall-out. Click here for details.

Gini Coefficient.  The Gini coefficient is sometimes used in classification problems.  Gini = 2*AUC  - 1, where AUC is the area under the curve (see the ROC curve entry above). A Gini ratio above 60% corresponds to a good model. Not to be confused with the Gini index or Gini impurity, used when building decision trees.

Nigel Goodwin wrote: There are a few other model selection techniques, such as BIC, AIC, or WAIC.