Treacherous Visualizations: How To Detect and Fix Them

Here I discuss my prediction about the worst 15-year long (yet unabated) real estate bubble: this is an example where visualizations, when not carefully selected and put into context, can be seriously misleading, even for top experts. Here I also provide some hints to help you avoid these visualization traps. This article shows how data scientists should think, when confronted to charts such as the one below. 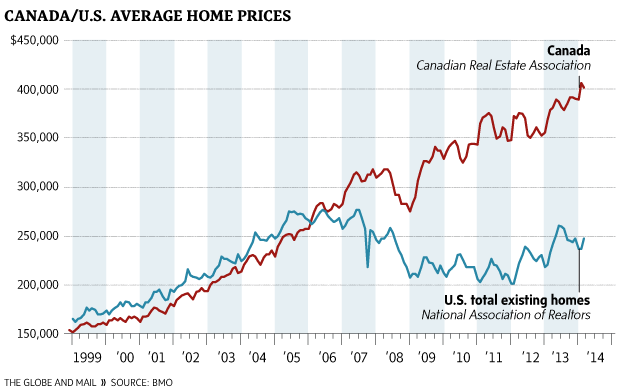 Looking at this chart, you would think that the Canadian real estate market is on the brink of collapse -- such a long stretch of strong growth is much overdue for a collapse, right? However, I don't think it will happen soon (not in the next 5 years.) Before you read further, think about why I might or might not be wrong about my prediction.

Why is this picture misleading?

It is misleading in the sense that the Canadian market is 10 times smaller than the US market, and this is not reflected in the above chart. Thus, compared to the 2007 real estate bubble in US, this is a tiny bubble with plenty of room to grow. Comparing the US and Canadian markets amounts to comparing a startup with Google. Then there are factors that can explain the continuous growth: commodities such as oil (Canada is a big producer with lots of potential though prices are down now,) global warming driving people North, and the fact that wealthy people from China and other countries are buying in places such as Vancouver (the most expensive city for real estate in North America - worst than New York City or San Francisco) to protect their assets from their governments.

Also, my rule of thumb is that any bubble, from start to finish, can grow by a factor 3 in just a few (say 5) years. Local bubbles such as San Francisco or Vancouver are getting closer to that limit, but again they are very local and thus small, in terms of total dollars involved.

Vancouver is about 140 miles North of Seattle, and San Francisco less than two hours South, by plane.  Both cities are twice as expensive as Seattle, regarding real estate. And Vancouver does not have high-paying jobs for people like us (have you ever seen a job ad for a data scientist in Vancouver?) How can this be explained?

My guess is that Seattle is slowly catching up, Smart arbitragers are more and more going to buy in an under-priced market: that would be my bet.

In a nutshell, when people get a 300% return (inflation-adjusted) within a 5-years time period, they usually sell, and that deflates the bubble. Also, the physical mechanisms that govern bubbles are the same as those governing Ponzi schemes.