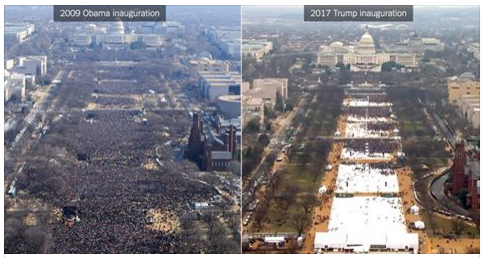 I am not saying that the images are fake, but rather, I point to the kind of questions everyone should ask herself, especially every data scientist, before coming to a conclusion.

It would be easy to dig in most of these questions and get a rather accurate answer, either confirming the veracity of this story, or not. We haven't done the research, but we would be happy to hear from people who did. What is at stake here is not whether or not Trump did get a smaller crowd, but whether we can still trust what we read in the news.

Bottom line:  when confronted with data, this is how any data scientist should react - asking legitimate questions - in case there is a doubt regarding the trustworthiness of the source.

The rise of fake news

Just out of curiosity, I did some research to find out how the term "fake news" has become popular recently. The chart below, showing Google queries for "fake news", speaks volumes. 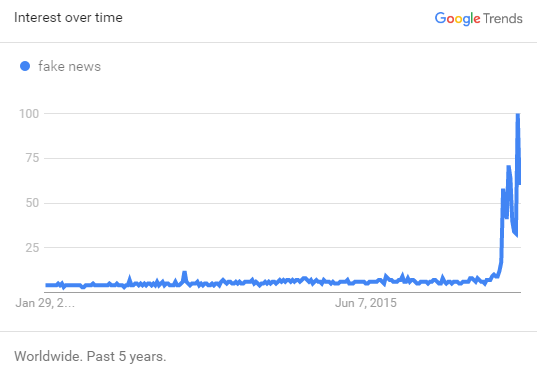 Click here for an interactive version of this chart. I also believe that data science, using AI (artificial intelligence) techniques to automatically process these news and investigate the context, will be able to identify news that are real, unbiased, and accurate.

I would add two more questions:

As we all (should) know, getting the data is often much more difficult that analyzing it.  See http://www.zerohedge.com/news/2017-01-27/more-fake-news-media-contr... for the results of those 2 questions in this case.

We must always remember when trying to verify anything where anyone has a personal stake that "half the truth is often a great lie" (Franklin), so we must be especially careful of all sources and every analysis.  Further, since most cases of this sort are not set up as rigorous experiments, there will be gaps where assumptions will have to be made, and those too can be the stuff of great lies.  So always think through the assumptions made, especially if they are not explicitly stated.

What's interesting to me is the question Vincent Granville didn't deem interesting enough to ask: Do the pictures accurately reflect the number of people in attendance at each event?

Each of the questions he did pose seem slanted toward one goal: explaining away the obvious discrepancy in attendance as due primarily to something other than the relative popularity of the President's being inaugurated.

Instead of answering the series of questions which he confesses he has not sought answers for, let me pose one question which I can answer: Were President Obama's favorable ratings  and President Trump's favorable ratings consistent with the different crowd sizes which are obvious in the picture? YES. According to a Gallup poll published the week of the inauguration Trump's pre-inauguration rating was about half what Obama's was.

I concede that there are reputable and less-reputable news sources on all points of the political spectrum, but President Trump has declared war on journalists who are consistently more credible than he is. When a reputable reporter tweets a statement which is not true (e.g., "MLK's bust was removed from the Oval Office") it's corrected as soon as possible. When Donald Trump tweets a statement which is not true (e.g., "I would have won the popular vote, but for millions of illegal votes") it's repeated ad infinitum, and facts be damned.

So when someone says, "Both sides do it," the question everyone should be asking herself is, "Do both sides do it in the same way and to the same degree, or is one side really trying harder to undermine and conceal the truth?"

Of all the possible examples to illustrate the rise in fake news...a photo published by PBS, taken 10 minutes before swear in is a very odd choice. Apart from the most extremist folks, PBS is not seen as a "fake" news organization. Good critical thinking questions follow.

Do the pictures correlate with a survey showing Trump's pre-inauguration favorables at 40% (historically low) compared to Obama's 78% (highest since 1993 when the poll started)? http://www.gallup.com/poll/201977/trump-pre-inauguration-favorables...

Was television also a thing during Obama?

Are the marches against Trump's policies friendly (see question 6)?

In fact, only 570 people moved for the inauguration compared to 3x that number in the march https://www.nytimes.com/interactive/2017/01/22/us/politics/womens-m...

Actually this last article has a lot of fun facts, including the times when the pics were taken (45 minutes before speech), charts with density areas during Trump vs Obama vs march. The evidence is overwhelming.

@Vincent, I think you can add one more question to the list - were they dressed in white head to toe making them invisible against the white, grass-cover background? Not entirely off topic, here is a real news article from here in Australia on how data science might have played a part in getting Donald Trump elected.

As much as I don't like the approach of mainstream media on most of issues, I have found the title of your article a little bit harsh. If I recall it correctly, both pictures are taken during the speech (allegedly peak time). And, it is obvious that in-person turnout in 2017 is less than 2009, I see no problem in reporting the fact as it is. Though, if your objection is toward the analysis of why in-person turnout is lower, I agree that all your points besides some others needed to be considered before jump into conclusion.

The CNN article that put those two pictures side-by-side clearly indicated the provenance of the pictures, including their timing ... the Trump's inauguration photo was taken during his speech, which should have been the peak audience, and time-not-known for the Obama event. There are not going to be many decent (corroborating) overhead shots because of FAA flight restrictions during this event.

Many of the questions or explanations of WHY attendance may have been different are entirely secondary to the main question of WHETHER the crowds were of different sizes, to the extent it is reasonably possible to assess that. (And many of those questions have also been discussed and answered, including the weather, security arrangements, and the political leanings of DC residents.)

Personally I don't attach much practical significance at all to the answer ... counting the votes was important, and we did that ...  but the photographic evidence that the crowd sizes at these two events was very different is manifestly clear at face value, and not worth debating as a serious question.

An important part of being an applied data scientist is knowing when to accept the evidence (or not), and move on.

It is correct that the two pictures by themselves could be misleading.  An innocent reader would naturally assume that they were looking at two pics when the crowds were at their peak.  However, every other line of evidence that I have seen, other than those suggested by the Trump team, suggest that less people really did turn out.

Before we assume these images present an accurate representation of reality, I think we must recall that all types of data must be validated. And whom is the validating source?

If I may offer a perspective on imagery. This would be a great opportunity to explore imagery analysis. Surely there is meta data associated with these images that could be verified or explored in depth such as timestamps, geo-location reference, etc.

Another aspect of imagery analysis is the perception of color. For example- I can identify what appear to be white structures in one image, which may or may not have a significant number of people inside. How would I find that answer?

To go even further, we could explore down to the pixel and create a model defining crowd size.

Wondering if the spike in 'fake news' queries on Google is real or artificial. It could have been inflated by someone running a Botnet that generates tons of fake (automated) queries about 'fake news', undetected by Google algorithms, maybe someone who wants to make people believe that most news are fake. That said, there is ample evidence that a lot of unverified or biased information has been released by the media. It usually does not come as fake news though, but rather, distorted information and misleading charts. See how to lie with visualizations for instance.