While at first glance it appears to substantially reduce the computational complexity of traditional factoring, at this stage there is still a lot of progress needed to make the new algorithm efficient. An interesting feature is that the success depends on the probability of two numbers to be co-prime, given the fact that they don't share the first few primes (say 2, 3, 5, 7, 11, 13) as common divisors. This probability can be computed explicitly and is about 99%.

The methodology relies heavily on solving systems of congruences, the Chinese Remainder Theorem, and the modular multiplicative inverse of some carefully chosen integers. We also discuss computational complexity issues. Finally, the off-the-beaten-path material presented here leads to many original exercises or exam questions for students learning probability, computer science, or number theory: proving the various simple statements made in my article.

You may skip this section. Here I outline the theory used to derive the main results in the next sections. The level is barely above high school (except for section 1.2), yet usually not taught even in many college math curricula.

Again, the product is over all primes. When k = 2, the two formula are identical. A proof can be found here.

This fundamental result is a consequence of the Chinese remainder theorem.

If z is not a prime number, then the following system of k congruences, with xy  ≤ z, uniquely determines two non-trivial numbers x, y such that xy = z. In other words, it allows you to find two factors x, y of z. The system is as follows:

Here p1, ..., pk must be pair-wise co-prime and their product larger than z.

This is a particular case of the Chinese remainder theorem, also useful in our context.

More about this can be found here.

The basic idea is to replace the difficult problem of solving xy = z (assuming here that x and y are two large prime numbers) by a system of congruences accepting more solutions, thus easier to solve. However, so far, no efficient way of solving these congruences has been found.

Indeed xy = z can be seen as a congruence, namely xy = m Mod z, with m = 0. Thus the problem of factoring z is treated as a particular case of solving a congruence, with the residue m equal to 0, and the moduli equal to z. Let us assume that the computational complexity to solve this congruence is O(f(z)) for some function f. The computational complexity is a function of z (as z gets large) but is thought to be independent of m. Using the most inefficient algorithm, we would have f(z) = SQRT(z). If we manage to split this congruence in (say) two smaller ones each with a moduli close to SQRT(z), then we are reducing the computational complexity from O(f(z)) to O(f(SQRT(z))). And this can be carried out recursively until we end up with congruences that all have small moduli. This is the basic principle governing our approach.

More about computational complexity is discussed in exercise 2, at the bottom of section 3.

As an illustration of how the algorithm works, let's apply it to factoring a very modest number, z = xy = 1223 × 2731. It involves the following steps.

You need to create 3 multiplication tables to identify the full list (intersection of 3 infinite lists) of candidates, and ignore those (x, y) that result in xy > z or x even or y even. 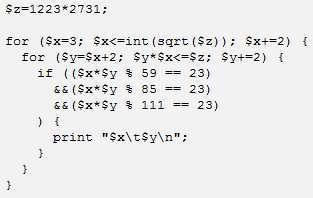 If instead, we consider 5 congruences rather than 3, say

Another example also producing a single candidate (the correct one) is

See section 1.2 for more details; the products are over primes only. By contrast, the probability that two random numbers are co-prime without the above restriction, is about 61%. When working with co-prime moduli, theorem A applies thus guaranteeing a unique solution (see section 1.4.) The last two congruences (xy = 507 Mod 1891 combined with xy = 1379 Mod 1861) are supposed to significantly reduce the computational complexity of the initial problem of factoring z, that is, finding x, y such that xy = 0 Mod  3340013. Both problems are equivalent. Note that z = 3340013.

This works too by virtue of theorem A in section 1.4. Is it more efficient?

3. Compact Formulation of the Problem

Let's focus on the case z = xy with

Let us denote as Gp(y) the modular multiplicative inverse of y, modulo p, as described in section 1.3.That is, Gp(y) is uniquely defined by 0  <  Gp(y)  <  p and y ⋅ Gp(y) = 1 Mod p. This inverse exists if and only if y and p are co-prime. It can be computed using the  extended Euclidean algorithm. Then the above system with two variables x, y and two congruences xy = m1 Mod p1,  xy = m2 Mod p2 simplifies to one equation with one variable (unknown) y, as follows:

[2] Solving an equation such as xy = m Mod p requires the computation of the modular multiplication table modulo p, that is (p - 1)^2 operations, see exercise [1]. If you need to solve k such equations with k pair-wise coprime moduli p1, ..., pk, then the number of operations is

Compare the number of operations for the 3 following cases investigated in this article:

Now a difficult question. If we choose, for the moduli, the k smallest primes p1, p2, ...,  pk such that their product is barely larger than z, how many operations are needed asymptotically as z becomes larger and larger? Solution: the number of operations grows more slowly than A (log z)^B where A, B are two constants, with B as low as 3 or maybe even as low as 2.75.

To put this into perspective, to factor all the positive integers up to 10^300, you only need to perform 2 x 10^7 operations to produce all the necessary modular multiplication tables. Then for each table (say for p) you only need to store p - 1 data points (see exercise 1, where p = 7), thus the total storage required is about 42,000 integers, with the largest of these integers being smaller than 800. And because of the symmetry of the multiplication, you can do with half that storage, that is 21,000 integers. In fact, you only need to consider the first k = 130 prime numbers, the largest of them being less than 800.

4. Other Math Articles by Same Author