In this article, we discuss a general framework to drastically reduce the influence of outliers in most contexts. It applies to problems such as clustering (finding centroids,) regression, measuring correlation or R-Squared, and many more. We will focus on the centroid problem here, as it is very similar and generalizes easily to solving a linear regression. The correlation / R-Squared issue was discussed in an earlier article and involves only a change of formula. Clustering and regression are more complex problems involving iterative algorithms.

This article also features interesting material for future data scientists, such as

We discuss replacing techniques used by statisticians, based on optimizing traditional L^2 metrics such as variance, by techniques based on L^p metrics, which are more robust when  1 <  p  < 2. The case p = 2 corresponds to the traditional framework, Throughout the article, p is referred to as the power. The regression and centroid problems being equivalent, we focus here on finding a centroid using the L^p criterion (denoted as H), and we show how to modify it for regression problems. Illustrations are in a 2-dimensional space (d = 2) but easily generalize to any dimension, especially as we are not using any matrix inversions to solve the problem.

The focus here is on finding the point that minimizes the sum of the "distances" to n points in a d-dimensional space, called centroid or center, especially in the presence of outliers.

where e is a very small positive quantity, equal to zero unless p is negative; the sum is over k = 1,...,n.

The function H has one parameter p called power, and when p = 2, we are facing the traditional problem of finding the centroid of a cloud of points: in this case, the solution is the classic average of the n points. This solution is notoriously sensitive to outliers. When 1 <  p < 2, we get get a more stable solution, less sensitive to outliers, yet when n is large (> 20) and the proportion of outliers is small (by definition it is always small!), the solution is pretty much the same regardless of p (assuming 1 < p < 3).

The same methodology can be used for regression. With 2 parameters u and v as in Y = u X + v, the function H becomes

Our proposed method smooths out the impact of outliers rather than detecting them. For outlier detection and removal, you can use one of these methods:

Another way to attenuate the impact of outliers is to use a weighted sum for H, that is (in the case of the regression problem) to use the formula

where q(k) is the weight attached to point k, with SUM{ q(k) } = 1. In this case, a point with low density is assigned a smaller weight.

When p < 0, and especially when p = -2, maximizing or minimizing H becomes an interesting physics problem of optimizing a potential H. The centroid problem is now equivalent to finding the point of maximum or minimum light, sound, radioactivity, or heat intensity, in the presence of an energy field produced by n energy source points. Both problems are closely related and use the same algorithm to find solutions.

However, the case p < 0 has no practical value to data scientists or statisticians (as far as I know) and it presents the following challenges:

2. Algorithm to find centroid when p > 1

There are many algorithms available to solve this type of mathematical optimization problem. A popular class of algorithms is based on gradient descent and boosting. Here however, we use what is possibly the simplest algorithm. Why? For two reasons. First it is very easy to understand, still leads to some interesting research, is easy to replicate, and keep the focus on the concepts and the results associated with the centroids, rather than on a specific implementation. Second, with modern computers (even on my 10 years old laptop) the computing power is big enough that naive algorithms perform well. If you are OK with getting results accurate to two or three digits -- and in real life, many data sets, even web analytics measured using two different sources, do not have higher accuracy -- then a rudimentary algorithm is enough.

So here I used rudimentary Monte-Carlo to find the centroids. However, in higher dimensions (d > 3) be careful about the curse of dimensionality. Note that when p < 0, Monte Carlo is not that bad, as it allows you to visit and circle around several local minima. It is also easy to deploy in a Map-Reduce environment (Hadoop.) The algorithm is actually so simple that there is no need to describe it: the short, easy-to-read source code below (Perl) speaks for itself.

Notes about the source code:

Below is the source code.

In the few lines of the source code (above), we generated points randomly distributed in the unit square [0, 1] x [0, 1] . In order to simulate outliers or more complicated distributions that represent real-life problems, one has to use more sophisticated techniques. Click here to get the source code to easily generate a cluster structure (illustrated in figure 1 below). 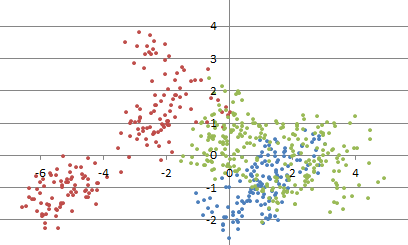 More complex simulations (random clusters evolving over time) can be found here. Some simple stochastic processes can be simulated by first simulating random points (called centers) uniformly distributed in a rectangle, then, around each center, simulating a random number of points radially distributed around each center. Other techniques involve thinning, that is, removing some points afver over-si,ulating a large number of points.

A few examples are provided in the next section to validate the methodology. In this section, rather than validation, we focus on showing its usefulness when 0 em>p < 2, compared to the traditional solution consisting of using p = 2, found in all statistical packages. Note that the traditional solution (p = 2) was designed not out of practical considerations such as robustness, but because of its ease of computation at a time when computers did not exist, and data sets were manually built.

To test the methodology, we created various data sets, introduced outliers, and computed the centroid using different values of p. The example shown in Figure 2, consisting of five points (bottom left) plus an outlier  (top right) illustrates the performance. The six data points are in blue. The centroids, computed for p = 0.75, 1.00, 1.25, 1.50, 1.75 and 2.00, are in red. The rightmost centroid corresponds to p = 2: this is the classic centroid. Due to the outlier, it is located outside the convex hull of the five remaining points, which is awkward. The leftmost centroid corresponds to p = 0.75 and is very close to the traditional centroid obtained after removing the outlier. I also tried the values p = 0.25 and p = 0.50, but failed to obtain convergence to a unique solution after 200,000 iterations. 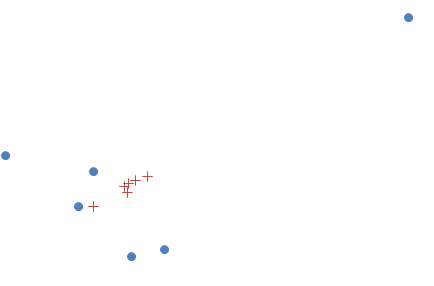 Figure 2: the blue dots represent the data points, the red + the centroid (computed for 6 values of p)

If you are wondering how to produce a scatter plot in Excel with two data sets (points and centroids) as in Figure 2, click here for instructions: it is easier than you think.

4. Convergence of the algorithm

Figure 3 shows the speed of convergence of the algorithm, using the same source code as in section 2 with p = 1.4. So you can replicate these results. In this case, the data set S consists of n = 100 points randomly (uniformly) distributed on [0, 1] x [0, 1].

About 10,000 iterations in the outer loop are needed to reach two digits of accuracy, and this requires a tiny fraction of a second to compute. This "10,000 iterations" is actually a rule of thumb for any Monte-Carlo algorithm used to find an optimum with two correct digits. Note that in Figure 3, only iterations providing an improvement over the current approximation of the centroid -- that is, iterations where the value of H is smaller than those computed in all previous iterations -- are displayed. A potential research topic is to investigate the asymptotic behavior of these "records", in the example below occurring at iterations 0, 4, 12, 44, 109, 156, and so on. 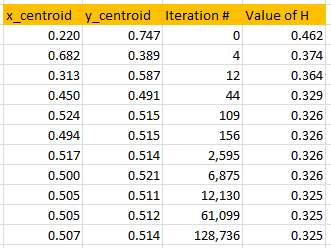 Indeed, we tried values of p equally spaced between 1.25 and 3.50, and in each case, the centroid found was also very close to (0.5, 0.5), see Figure 4. That includes the special case p = 2 (it is located somewhere on the chart below) corresponding to the classic average of the n points. Note that here, no outliers were introduced in the simulations. 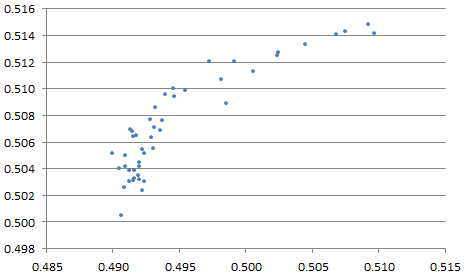 Figure 4: x- and y-coordinates of centroid, obtained with various values of p

The following contour maps in Figure 5, produced with the contour function in R, show that as p gets closer to 0, the function H becomes more chaotic, exhibiting local minima. These charts were produced using a data set S consisting of n = 20 points randomly (uniformly) distributed on [0, 1] x [0, 1]. It is interesting to notice that, despite the random distribution of the n points, strong patterns emerge when p < 1 (the statistical significance of these patterns is weak though.). 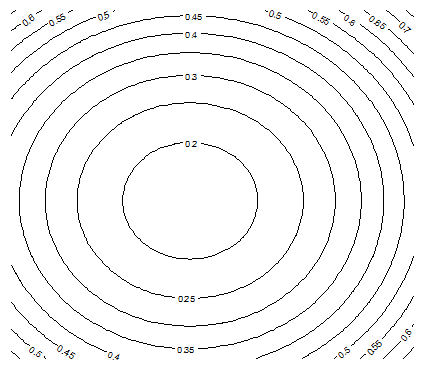 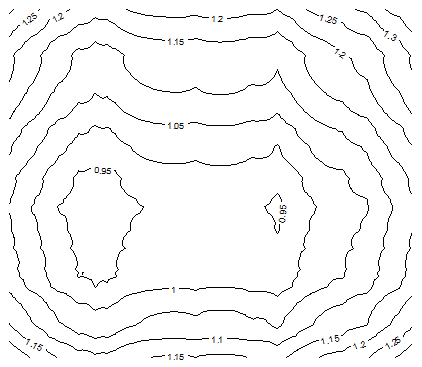 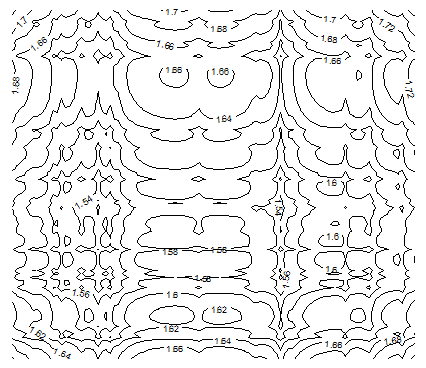 Here the file math2r.txt stores the m x m values of H sequentially in a one-column text file, row after row. The first row is the header (equal to H.) Note that in order to produce Figure 5, we used contour(z) rather than image(z, col = gray.colors(300)). In Figure 6 we actually used the function image to display H values for p = 0.5: low values of H (corresponding to proximity to centroid) are in a darker color, and unlike the case p = 2, you can notice multiple local minima. Figure 6 is based on the same data as Figure 5B. The source code to produce the input file math2r.txt can be found here.. 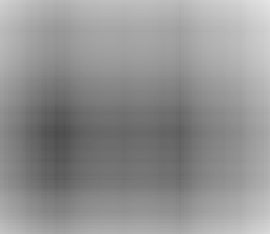 As a bonus, below is Figure 7 corresponding to p = -2, which interestingly is very similar to p = 0.5 (see Figure 5B.) This value of p has tremendous applications in physics, as it corresponds to the inverse-square law. 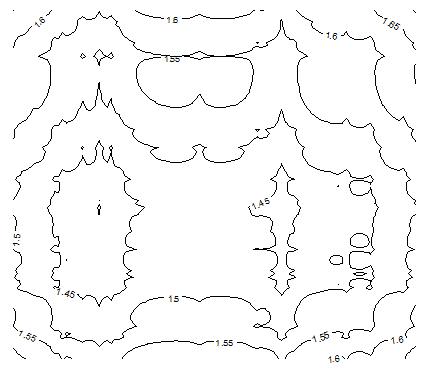