Unlike most other lists of top experts, this one is a hand-picked selection, not based on influence or Klout scores, or the number of Twitter followers and re-tweets, or other similar metrics. Each of these experts has his/her own Wikipedia page. Some might not even have a Twitter account. All of them have had a very strong academic and research career in the most prestigious places. 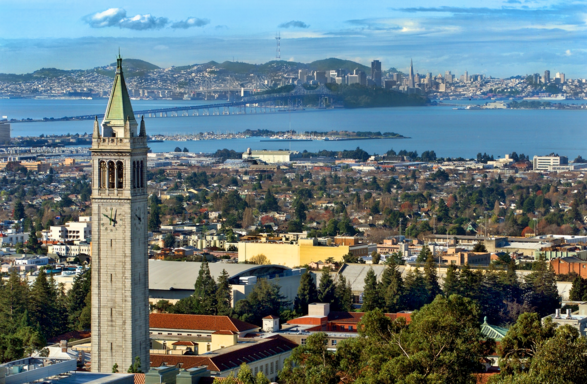 Berkeley University with San Francisco in the background

Jeffrey Hawkins is the American founder of Palm Computing (where he invented the Palm Pilot) and Handspring (where he invented the Treo). He has since turned to work on neuroscience full-time, founded the Redwood Center for Theoretical Neuroscience (formerly the Redwood Neuroscience Institute) in 2002, founded Numenta in 2005 and published On Intelligence describing his memory-prediction framework theory of the brain. In 2003 he was elected as a member of the National Academy of Engineering "for the creation of the hand-held computing paradigm and the creation of the first commercially successful example of a hand-held computing device."

Hawkins also serves on the Advisory Board of the Secular Coalition for America and offers advice to the coalition on the acceptance and inclusion of nontheism in American life.

Andrew Yan-Tak Ng is Chief Scientist at Baidu Research in Silicon Valley. In addition, he is an associate professor in the Department of Computer Science and the Department of Electrical Engineering by courtesy at Stanford University. He is chairman of the board of Coursera, an online education platform that he co-founded with Daphne Koller.

He researches primarily in machine learning and deep learning. His early work includes the Stanford Autonomous Helicopter project, which developed one of the most capable autonomous helicopters in the world, and the STAIR (STanford Artificial Intelligence Robot) project, which resulted in ROS, a widely used open-source robotics software platform.

Ng is also the author or co-author of over 100 published papers in machine learning, robotics and related fields, and some of his work in computer vision has been featured in a series of press releases and reviews. In 2008, he was named to the MIT Technology Review TR35 as one of the top 35 innovators in the world under the age of 35. In 2007, Ng was awarded a Sloan Fellowship. For his work in Artificial Intelligence, he is also a recipient of the Computers and Thought Award (2009).

On May 16, 2014, Ng announced from his Coursera blog that he would be stepping away from his day-to-day responsibilities at Coursera, and join Baidu as Chief Scientist, working on deep learning.

Sebastian Thrun is an educator, programmer, robotics developer and computer scientist from Germany. He is CEO and cofounder of Udacity, an institution he cofounded with David Stavens and Mike Sokolsky. He was a Google VP and Fellow, and a Professor of Computer Science at Stanford University. He is currently also an Adjunct Professor at Georgia Tech.

Thrun led development of the robotic vehicle Stanley which won the 2005 DARPA Grand Challenge, and which has since been placed on exhibit in the Smithsonian Institution's National Museum of American History. His team also developed a vehicle called Junior, which placed second at the DARPA Grand Challenge (2007). Thrun led the development of the Google self-driving car.

Thrun is also known for his work on probabilistic algorithms for robotics with applications including robotic mapping. In recognition of his contributions, and at age 39, Thrun was elected into the National Academy of Engineering and also into the Academy of Sciences Leopoldina in 2007. In 2011, Thrun received the Max-Planck-Research Award. and the inaugural AAAI Ed Feigenbaum Prize. Fast Company selected Thrun as the fifth most creative person in business in the world. The Guardian recognized Thrun as one of 20 "fighters for internet freedom".

Zoubin Ghahramani is an Iranian researcher and Professor of Information Engineering at the University of Cambridge. He holds joint appointments at Carnegie Mellon University and University College London. Ghahramani obtained his Ph.D from the Department of Brain and Cognitive Sciences at the Massachusetts Institute of Technology, under the supervision of Michael I. Jordan.

David M. Blei is a Professor in the Statistics and Computer Science departments at Columbia University. Prior to fall 2014 he was an Associate Professor in the Department of Computer Science at Princeton University. His work is primarily in machine learning. His research interests include topic models and he was one of the original developers of latent Dirichlet allocation. As of November 11, 2015, his publications have been cited 31,135 times, giving him an h-index of 53.

Daphne Koller  is an Israeli-American Professor in the Department of Computer Science at Stanford University and a MacArthur Fellowship recipient. She is also one of the founders of Coursera, an online education platform. Her general research area is artificial intelligence and its applications in the biomedical sciences. Koller was featured in a 2004 article by MIT Technology Review titled "10 Emerging Technologies That Will Change Your World" concerning the topic of Bayesian machine learning.

Geoffrey Hinton is a British-born cognitive psychologist and computer scientist, most noted for his work on artificial neural networks. As of 2015 he divides his time working for Google and University of Toronto. He was one of the first researchers who demonstrated the use of generalized backpropagation algorithm for training multi-layer neural nets and is an important figure in the deep learning movement.

Yann LeCun is a computer scientist with contributions in machine learning, computer vision, mobile robotics and computational neuroscience. He is well known for his work on optical character recognition and computer vision using convolutional neural networks (CNN), and is a founding father of convolutional nets. He is also one of the main creators of the DjVu image compression technology (together with Léon Bottou and Patrick Haffner). He co-developed the Lush programming language with Léon Bottou.

Sejnowski is also Professor of Biological Sciences and Adjunct Professor in the Departments of Neurosciences, Psychology, Cognitive Science, Computer Science and Engineering at the University of California, San Diego, where he is Co-Director of the Institute for Neural Computation.

With Barbara Oakley, he co-created and taught Learning How To Learn: Powerful mental tools to help you master tough subjects, the world's most popular online course, It is available on Coursera.

Michael I Jordan is an American scientist, Professor at the University of California, Berkeley and leading researcher in machine learning and artificial intelligence.

In the 1980s Jordan started developing recurrent neural networks as a cognitive model. In recent years, though, his work is less driven from a cognitive perspective and more from the background of traditional statistics.