Here I discuss breaking encryption keys that rely on the product of two very large prime numbers. In other words, the interest here is to factor a number (representing a key in some encryption system) that is the product of two very large primes. Once the number is factored, the key is compromised. Factoring such large numbers is believed to be computationally non-feasible, thus the interest in discovering new algorithms to disprove this conjecture, and specifically to factor large numbers (product of two large primes - the most difficult numbers to factor) much faster than with the current algorithms. As an important side note, I will discuss the randomness (or lack of) of the byproduct time series involved, and show why they are unsuitable to generate random deviates, despite satisfying several tests of randomness. This feature (lack of randomness) can further be exploited to develop more potent factoring algorithms.

We are interested in factoring integer numbers z = p * q where p and q are large, unknown primes. In this article, p and q are of the same order of magnitude, with (say) 0.5 < p/q < 2. The methodology below does not work otherwise. Clearly, using p and q that are of different orders of magnitude, will make the encryption key much stronger. However this would mean that one of the factors (p or q) is much smaller than the other one. The smaller min(p, q) is, the easier to break the system. Thus in practice it is not unusual to have p and q being of the same order of magnitude.

if w is the square of an integer, then {

The maximum number of iterations allowed - the number N - should be small, preferably well below the number of prime numbers less than SQRT(z), that is well below 2*SQRT(z)/log(z), otherwise naive factorization algorithms may be more efficient.

Further research should be performed to find in which cases the algorithm is most useful, and whether it still works for very large prime factors. Note that for very large prime factors (the kind of numbers used in military-grade encryption keys), prime number tables may not be available, significantly reducing the effectiveness of other factorization algorithms, and thus potentially making my algorithm more valuable when p and q are of same order of magnitude. This needs to be checked.

Finally, in the main loop, it might be possible to skip many iterations that are almost certain not to produce a solution, thus making the algorithm run faster.  A deep analysis of auto-correlations in the time series of residuals e = SQRT(w) - INT(SQRT(w)) may provide a solution. We haven't investigated these time series in full detail yet, but the next section provides some interesting visual results. 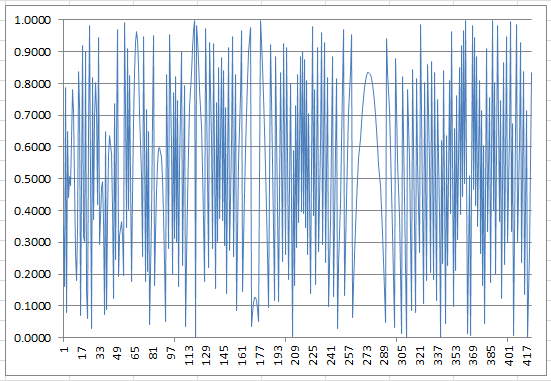 The distribution of the residuals is uniform on [0,1] but clearly, the time series exhibits strong patterns and large scale auto-correlations. In particular, one notices the large parabolic bridge spanning from iterations #260 to #290 (there is a smaller one on the left-hand side, and a tiny one near the bottom around iteration #170). The successive local minima do not appear randomly, including the global minimum e = o at iteration 419, corresponding to the factorization.

Out of curiosity, I wondered if this pattern was a characteristic of products of two large primes. The answer is no. I tried with two other z's that have almost the same value but that are either prime or have numerous factors, and here is what we get: 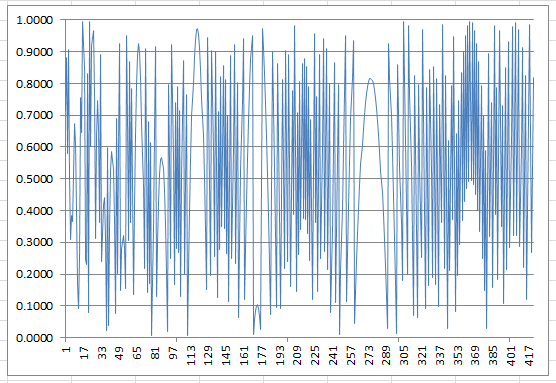 Surprisingly, figures 1 and 2 are very similar. But there are differences too, especially around iteration #370, and of course e never reaches zero. 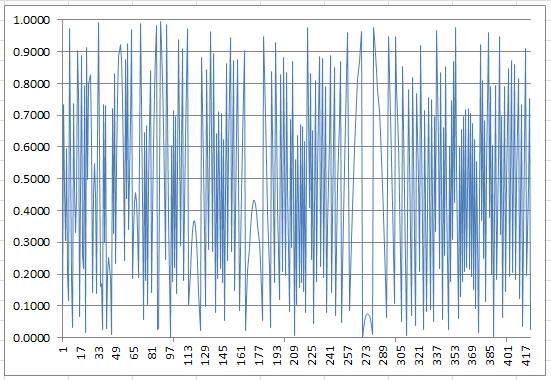 Figure 3 is different from figures 1 and 2: it has more parabolic bridges, and the residual e is equal to zero more than once. The spreadsheet with the three charts can be downloaded here.

This is the main domain of Quantum cryptography research:

PS :  Vincent, just a question.  Why am I being moderated for all my posts at LinkedIn Data Science Central discussion group? If I'm not welcome in that group, then that's fine. I'll leave the group. If my contribution doesn't fit in with specific topics of discussion simply because I point out the errors or misguided opinions of those authors, then just say so. I'll simply leave the group.