In the previous course Introduction to Deep Learning, we saw how to use Neural Networks to model a dataset of many examples. The good news is that the basic architecture of Neural Networks is quite generic whatever the application: a stacking of several perceptrons to compose complex hierarchical models and their optimization using gradient descent and backpropagation.

Inspite of this, you have probably heard about Multilayer Perceptrons (MLPs), Convolutional Neural Networks (CNNs), Recurrent Neural Networks (RNNs), LSTM, Auto-Encoders, etc. These deep learning models are different from each other. Each model is known to be particulary performant in some specific tasks, even though, fundamentally, they all share the same basic architecture.

In the context of this post, we will focus on modeling sequences as a well-known data structure and will study its specific learning framework.

Applications of sequence modeling are plentiful in day-to-day business practice. Some of them emerged to meet today’s challenges in terms of quality of service and customer engagement. Here some examples:

In the auto industry, self-parking is also a sequence modeling task. In fact, parking could be seen as a sequence of mouvements where the next movement depends on the previous ones.

Other applications cover text classification, translating videos to natural language, image caption generation, hand writing recognition/generation, anomaly detection, and many more in the future…which none of us can think (or aware) at the moment.

However, before we go any further in the applications of Sequence Modeling, let us understand what we are dealing with when we talk about sequences.

Sequences are a data structure where each example could be seen as a series of data points. This sentence: “I am currently reading an article about sequence modeling with Neural Networks” is an example that consists of multiple words and words depend on each other. The same applies to medical records. One single medical record consists in many measurments across time. It is the same for speech waveforms.

So why we need a different learning framework to model sequences and what are the special features that we are looking for in this framework?

For illustration purposes and with no loss of generality, let us focus on text as a sequence of words to motivate this need for a different learning framework.

In fact, machine learning algorithms typically require the text input to be represented as a fixed-lengthvector. Many operations needed to train the model (network) can be expressed through algebraic operations on the matrix of input feature values and the matrix of weights (think about a n-by-p design matrix, where n is the number of samples observed, and p is the number of variables measured in all samples).

Thus, to model sequences, we need a specific learning framework able to:

Recurrent neural networks (RNNs) could address this issue. They are networks with loops in them, allowing information to persist.

So, let us find out more about RNNs!

How a Recurrent Neural Network works? 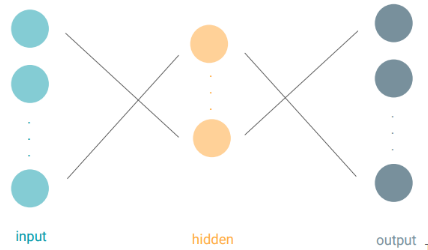 The only difference is that each hidden unit is doing a slightly different function. So, let’s explore how this hidden unit works.

A recurrent hidden unit computes a function of an input and its own previous output, also known as the cell state. For textual data, an input could be a vector representing a word x(i) in a sentence of n words (also known as word embedding).

W and U are weight matrices and tanh is the hyperbolic tangent function.

Similarly, at the next step, it computes a function of the new input and its previous cell state: s2 = tanh(Wx1+ Us1). This behavior is similar to a hidden unit in a feed-forward Network. The difference, proper to sequences, is that we are adding an additional term to incorporate its own previous state.

A common way of viewing recurrent neural networks is by unfolding them across time. We can notice that we are using the same weight matrices W and U throughout the sequence. This solves our problem of parameter sharing. We don’t have new parameters for every point of the sequence. Thus, once we learn something, it can apply at any point in the sequence. 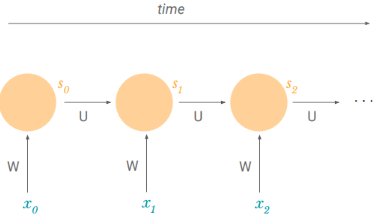 The fact of not having new parameters for every point of the sequence also helps us deal with variable-length sequences. In case of a sequence that has a length of 4, we could unroll this RNN to four timesteps. In other cases, we can unroll it to ten timesteps since the length of the sequence is not prespecified in the algorithm. By unrolling we simply mean that we write out the network for the complete sequence. For example, if the sequence we care about is a sentence of 5 words, the network would be unrolled into a 5-layer neural network, one layer for each word.

How do we train a Recurrent Neural Network?

Let’s consider the following task: for a set of speeches in English, we need the model to automatically convert the spoken language into text i.e. at each timestep, the model produces a prediction of a transcript (an output) based on the part of speech at this timestep (the new input) and the previous transcript (the previous cell state).

The total loss is just the sum of the losses at every timestep.

Since the loss is a function of the network weights, our task it to find the set of weights theta that achieve the lowest loss. For that, as explained in the first article “Introduction to Deep Learning”, we we can apply the gradient descent algorithm with backpropagation (chain rule) at every timestep, thus taking into account the additional time dimension.

W and U are our two weight matrices. Let us try it out for W.

And now, we can focus on a single timestep to calculate the derivative of the loss with respect to W. 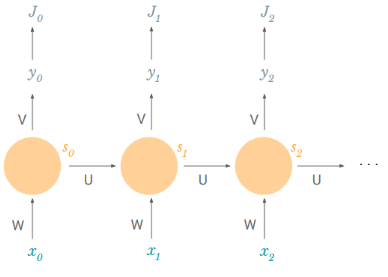 Easy to handle: we just use backpropagation.

We remember that s2 = tanh(Wx1 + Us1) so s2 also depends on s1 and s1 also depends on W. This actually means that we can not just leave the derivative of s2 with respect to W as a constant. We have to expand it out farther.

So how does s2 depend on W? 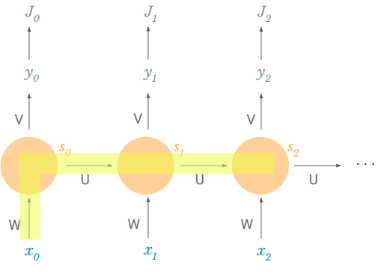 Thus, the derivative of the loss with respect to W could be written as follows:

We can see that the last two terms are basically summing the contributions of W in previous timesteps to the error at timestep t. This is key to understand how we model long-term dependencies. From one iteration to another, the gradient descent algorithm allows to shift network parameters such that they include contributions to the error from past timesteps.

For any timestep t, the derivative of the loss with respect to W could be written as follows:

So to train the model i.e. to estimate the weights of the network, we apply this same process of backpropagation through time for every weight (parameter) and then we use it in the process of gradient descent.

Why are Recurrent Neural Networks hard to train?

In practice RNNs are a bit difficult to train. To understand why, let’s take a closer look at the gradient we calculated above:

We can see that as the gap between timesteps gets bigger, the product of the gradients gets longer and longer. But, what are each of these terms?

Each term is basically a product of two terms: transposed W and a second one that depends on f’, the derivative of the activation function.

Thus, with small values in the matrix and multiple matrix multiplications, the gradient values are shrinking exponentially fast, eventually vanishing completely after a few time steps. Gradient contributions from “far away” steps become zero, and the state at those steps doesn’t contribute to what you are learning: you end up not learning long-range dependencies.

Vanishing gradients aren’t exclusive to RNNs. They also happen in deep Feedforward Neural Networks. It’s just that RNNs tend to be very deep (as deep as the sentence length in our case), which makes the problem a lot more common.

Fortunately, there are a few ways to combat the vanishing gradient problem. Proper initialization of the Wmatrix can reduce the effect of vanishing gradients. So can regularization. A more preferred solution is to use ReLU instead of tanh or sigmoid activation functions. The ReLU derivative is a constant of either 0 or 1, so it isn’t as likely to suffer from vanishing gradients.

An even more popular solution is to use Long Short-Term Memory (LSTM) or Gated Recurrent Unit (GRU) architectures. LSTMs were first proposed in 1997 and are perhaps the most widely used models in NLP today. GRUs, first proposed in 2014, are simplified versions of LSTMs. Both of these RNN architectures were explicitly designed to deal with vanishing gradients and efficiently learn long-range dependencies. We’ll cover them in the next part of this article.

It will come soon!

Resources I used when writing this article: