I have started reading about Deep Learning for over a year now through several articles and research papers that I came across mainly in LinkedIn, Medium and Arxiv.

When I virtually attended the MIT 6.S191 Deep Learning courses during the last few weeks (Here is a link to the course site), I decided to begin to put some structure in my understanding of Neural Networks through this series of articles.

I will go through the first four courses:

For each course, I will outline the main concepts and add more details and interpretations from my previous readings and my background in statistics and machine learning.

Starting from the second course, I will also add an application on an open-source dataset for each course.

Traditional machine learning models have always been very powerful to handle structured data and have been widely used by businesses for credit scoring, churn prediction, consumer targeting, and so on.

The success of these models highly depends on the performance of the feature engineering phase: the more we work close to the business to extract relevant knowledge from the structured data, the more powerful the model will be.

When it comes to unstructured data (images, text, voice, videos), hand engineered features are time consuming, brittle and not scalable in practice. That is why Neural Networks become more and more popular thanks to their ability to automatically discover the representations needed for feature detection or classification from raw data. This replaces manual feature engineering and allows a machine to both learn the features and use them to perform a specific task.

The fundamental building block of Deep Learning is the Perceptron which is a single neuron in a Neural Network.

Given a finite set of m inputs (e.g. m words or m pixels), we multiply each input by a weight (theta 1 to theta m) then we sum up the weighted combination of inputs, add a bias and finally pass them through a non-linear activation function. That produces the output Yhat.

Deep Neural Networks are no more than a stacking of multiple perceptrons (hidden layers) to produce an output. 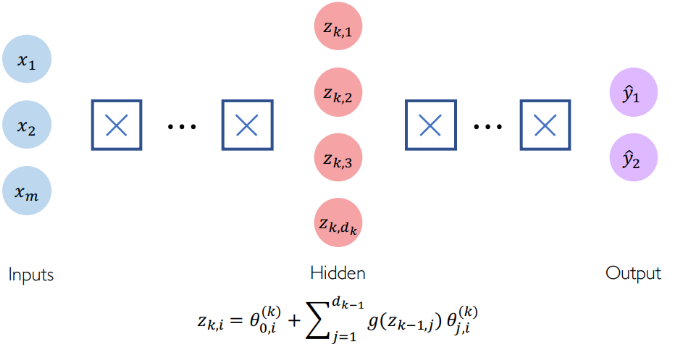 Now, once we have understood the basic architecture of a deep neural network, let us find out how it can be used for a given task.

Let us say, for a set of X-ray images, we need the model to automatically distinguish those that are related to a sick patient from the others.

For that, machine learning models, like humans, need to learn to differentiate between the two categories of images by observing some images of both sick and healthy individuals. Accordingly, they automatically understand patterns that better describe each category. This is what we call the training phase.

Concretely, a pattern is a weighted combination of some inputs (images, parts of images or other patterns). Hence, the training phase is nothing more than the phase during which we estimate the weights (also called parameters) of the model.

When we talk about estimation, we talk about an objective function we have to optimize. This function shall be constructed to best reflect the performance of the training phase. When it comes to prediction tasks, this objective function is usually called loss function and measures the cost incurred from incorrect predictions. When the model predicts something that is very close to the true output then the loss function is very low, and vice-versa.

In the presence of input data, we calculate an empirical loss (binary cross entropy loss in case of classification and mean squared error loss in case of regression) that measures the total loss over our entire dataset:

Since the loss is a function of the network weights, our task it to find the set of weights theta that achieve the lowest loss:

If we only have two weights theta 0 and theta 1, we can plot the following diagram of the loss function. What we want to do is to find the minimum of this loss and consequently the value of the weights where the loss attains its minimum.

To minimize the loss function, we can apply the gradient descent algorithm:

This first article is an introduction to Deep Learning and could be summarized in 3 key points:

The next article will be about Sequence modeling with Neural Networks. We will learn how to model sequences with a focus on Recurrent Neural Networks (RNNs) and their short-term memory and Long Short Term Memory (LSTM) and their ability to keep track of information throughout many timesteps.

Great article and second on the Deep Learning book by Ian Goodfellow.  It's great that it's online, but I got a good deal on the hardcover edition and it's worth every penny.

I'm a noob to everything DL, ML and data science related, and it's quite accessible and well written.  I'm glad there's a chapter devoted to explaining the maths involved (ch 2).

Thanks for sharing this article. Excellent work!!!  Cover all the deep learning aspects. Great job!!!

Excellent article. Thank you very much for shared your knowledge.

Basic and informative article. Thank you for posting.