Jobs of the Future: New jobs around data science and artificial intelligence

We can have an intuition of which professions will be more in demand in the future, according to new trends and social changes. It is clear that, as many large organizations mention, everything related to data science and artificial intelligence will be one of the most demanding professions in the future. But can we imagine what the new professions that will emerge around this discipline will be in the future? 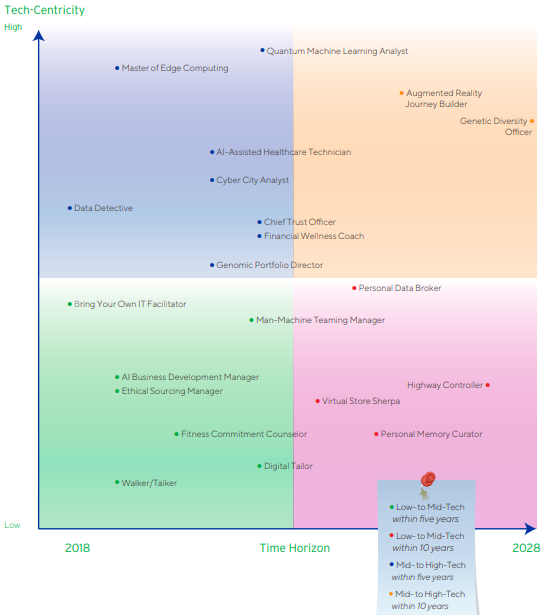 A couple of years ago, I attended a talk by Carmen Artigas in which she mentioned new professions such as Digital Archaeologist, which caught my attention very much. Continuing to investigate this idea, I found a study by Cognizan in which new professionals appear as shown in the following graph. New professions appear such as Data Detective, Personal Memory Curator, Artificial Intelligence Technical Assistants for the health sector or Model Trainer. What do you think? What professions will be generated in the future related to the world of data in your opinion? I am looking forward to generate a debate around this topic and to know your opinion. I throw the first arrow, and I think that one of the future professions that does not appear in this report and is likely to be generated in the near future is DATA POLICE. What do you think?