In the previous blog, we saw how you could use basic high school maths to learn about the workings o...

We have seen that a regression problem can be modelled as a set of equations which we need to solve. In this section, we discuss the ways to solve these equations. Again, we start with ideas you learnt in school and we expand these to more complex techniques. In simple linear regression, we aim to find a relationship between two continuous variables. One variable is the independent variable and the other is the dependent variable (response variable). The relationship between these two variables is not deterministic but is statistical.  In a deterministic relationship, one variable can be directly determined from the other. For example, conversion of temperature from Celsius to Fahrenheit is a deterministic process. In contrast, a statistical relationship does not have an exact solution – for example – the relationship between height and weight. In this case, we try to find the best fitting line which models the relationship. To find the best fitting line, we aim to reduce the total prediction error for all the points. Assuming a linear relation exists, the equation can be represented as y = mx + c for an input variable x and a response variable y. For such an equation, the values of m and c are chosen to represent the line which minimises the error. The error being defined as 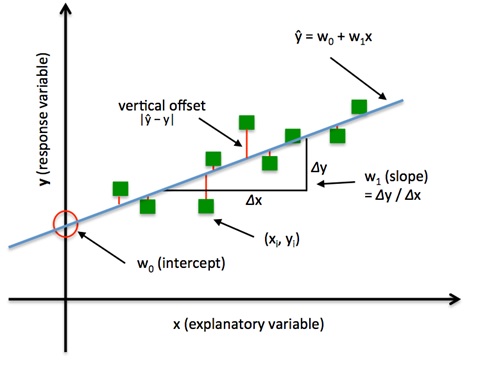 This idea is depicted above.

More generally, for multiple linear regression, we have

when expressed in the matrix form, this is represented as

Where X is the input data, m is a vector of coefficients and y is a vector of output variables for each row in X. To find the vector m, we need to solve the equation.

There are various ways to solve a set of linear equations

For smaller datasets, this equation can be solved by considering the matrix inverse. Typically, this was the way you learned to solve a set of linear equations in high school 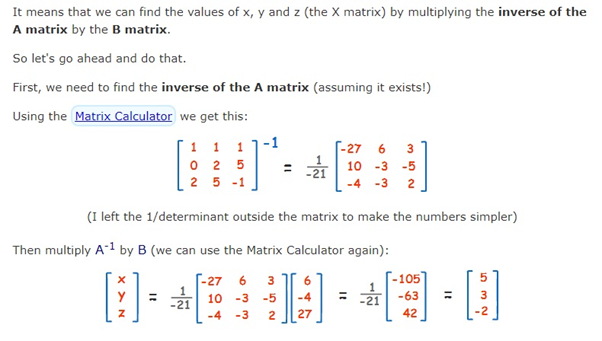 Instead of considering the matrix inverse, there is another way to solve a set of linear equations. Consider that the in the above diagram for the X and Y axes, the overall problem is to reduce the value of the loss function. In the above diagram, the cost function J(w), the sum of squared errors (SSE), can be written as:

Typically, in two dimensions, the Gradient descent algorithm is depicted as a hiker (the weight coefficient) who wants to climb down a mountain (cost function) into a valley (representing the cost minimum), and each step is determined by the steepness of the slope (gradient). Considering a cost function with only a single weight coefficient, we can illustrate this concept as follows: 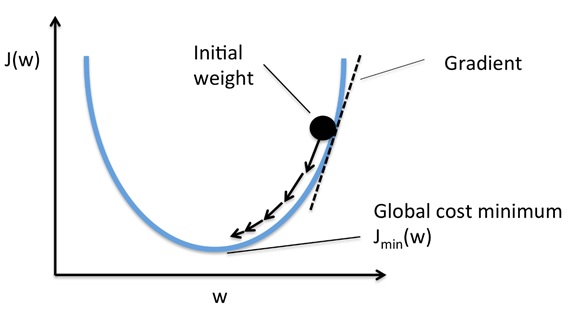 Using the Gradient Decent  optimization algorithm, the weights are updated incrementally after each epoch (= pass over the training dataset). The magnitude and direction of the weight update is computed by taking a step in the opposite direction of the cost gradient. In three dimensions, solving this equation involves computing the minima of the loss function expressed in terms of slope and the intercept as below 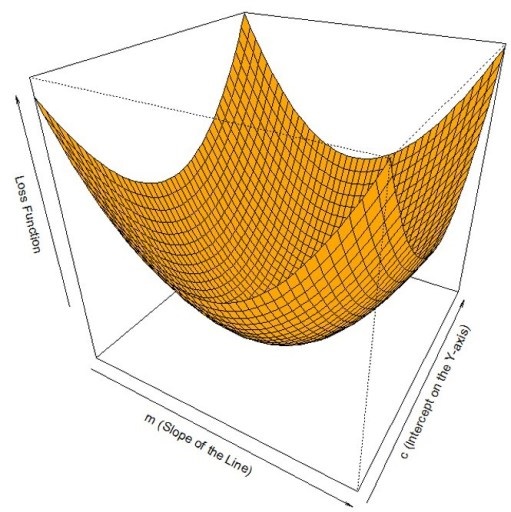 Use of Gradient descent in multi-layer perceptrons

You saw in the previous section, how the Gradient descent algorithm can be used to solve a linear equation. More typically, you are likely to encounter gradient descent to solve equations for multilayer perceptrons i.e. deep neural networks (where we have a set of non-linear equations). While the same principle applies, the context is different as we explain below

In a neural network, the forward pass is a set of operations which transform network input into the output space. During the inference stage neural network relies solely on the forward pass. For the backward pass, in order to start calculating error gradients, first, we have to calculate the error (i.e. the overall loss). We can view the whole neural network as a composite function (a function comprising of other functions). Using the Chain Rule, we can find the derivative of a composite function. This gives us the individual gradients. In other words, we can use the Chain rule to apportion the total error to the various layers of the neural network. This represents the gradient that will be minimised using Gradient Descent.

As we have seen before, Gradient descent is an iterative optimization algorithm which is used to find the local minima or global minima of a function. The algorithm works using the following steps

In this post, you understood the application of Gradient descent both in neural networks but also back to linear equations

under the hood of neural networks part 1 fully connected