A simplified explanation for Understanding the Mathematics of Deep Learning

In this post, I explain the maths of Deep Learning in a simplified manner.  To keep the explanation simple, we cover the workings of the MLP mode (Multilayer Perceptron). I have drawn upon a number of references – which are indicated in the post in the relevant sections.

Deep Learning models are playing a significant role in many domains. In the simplest case, deep learning involves stacking multiple neural network layers to address a problem (typically Classification). Deep neural networks can handle a large number of features and can perform automatic feature selection. Prior to Deep neural networks, algorithms like SVM performed linear classification (and non-linear classification using the Kernel trick). But SVM still needs explicit feature selection and feature transformation techniques. In 2012, Geoffrey Hinton used generalized backpropagation algorithm for training a multi-layer neural network. With this development, the field of deep learning – as we know it today – was born. Other factors also benefited Deep Learning – for example the availability of Data and better processing power (GPUs) etc

The fundamental unit of a neural net is a single neuron which was loosely modelled after the neurons in a biological brain. For the simplest case (MLP – Multilayer perceptron), each neuron in a given layer (i.e., layer 1) will be connected to neurons in the next layer (i.e., layer 2). The connections between neurons mimic the synapses in the biological brain. A neuron will only fire i.e. send the output signal if the weighted summation of its input signals transformed by an activation function passes a threshold. The activation function is non-linear 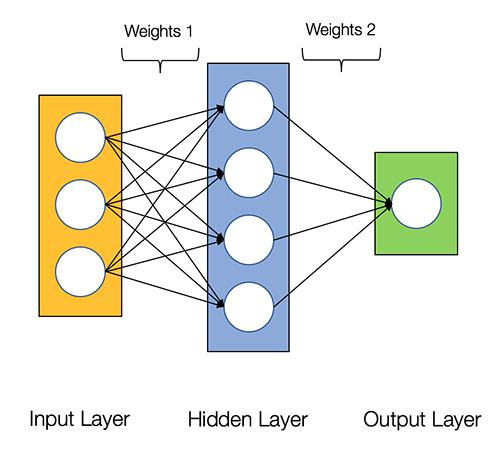 Understanding the significance of non-linearity

Before we proceed, we need to appreciate the significance of non-linearlity. Why do we need to use non-linear activation functions? What is the significance and benefit of non-linear functions? In a nutshell, without a non-linear activation function, the neural network is merely calculating linear combinations of values i.e. the network is combining the signals but is not creating a new signal / function. For example, the linear combination of two lines is another line. As we see below. 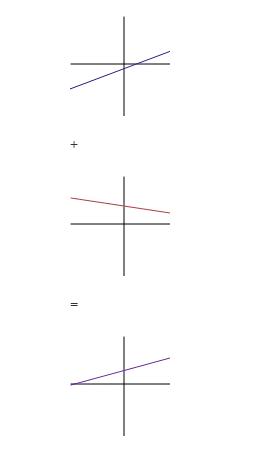 However, with a non-linear activation function like ReLU, the linear combination is a new type of function. We can construct entirely different (nonlinear) models in this way. So, introducing nonlinearity extends the kinds of functions that we can represent with our neural network. Reference and image Quora Why does deep learning architectures only use the non-linear ...

A combination of Gradient descent and backpropagation algorithms are used to train a neural network i.e. to minimise the total loss function

Forward pass is basically a set of operations which transform network input into the output space. During the inference stage neural network relies solely on the forward pass. Let’s consider a simple neural network with 2-hidden layers. Here we assume that each neuron, except the neurons in the last layers, uses ReLU activation function (the last layer uses softmax). Rewriting this into a matrix form we will get:

In order to start calculating error gradients, first, we have to calculate the error (i.e. the overall loss). We can view the whole neural network as a composite function (a function comprising of other functions). Using the Chain Rule, we can find the derivative of a composite function. This gives us the individual gradients. In other words, we can use the Chain rule to apportion the total error to the various layers of the neural network. This represents the gradient that will be minimised using Gradient Descent.

Reference and image source: under the hood of neural networks part 1 fully connected

Gradient descent is an iterative optimization algorithm which is used to find the local minima or global minima of a function. The algorithm works using the following steps

Thus, the entire neural network training can be seen as a combination of the chain rule and partial derivatives 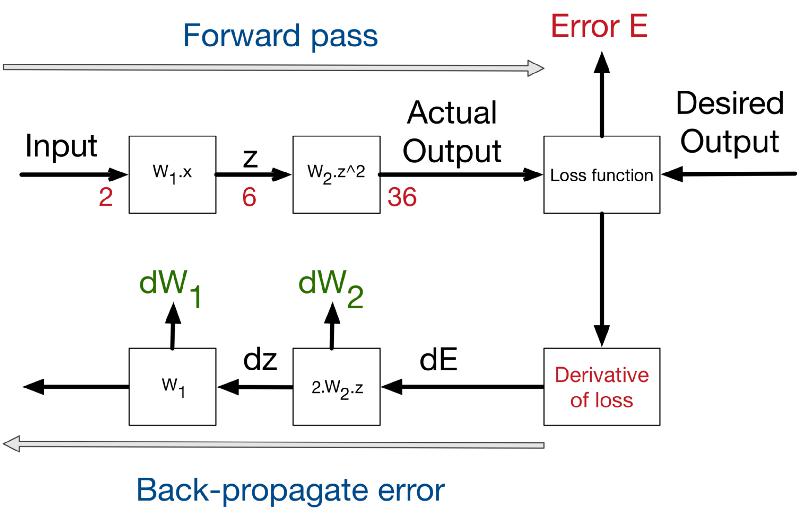 To recap, considering the big picture - we have the starting point of errors, which is the loss function. This figure shows the process of backpropagating errors following this schemas:
Input -> Forward calls -> Loss function -> derivative -> backpropagation of errors. At each stage we get the deltas on the weights of this stage. For the figure below, W1 = 3 and w2 = 1

If you can work with a few simple concepts of Maths such as partial derivatives and the Chain Rule, you could gain a deeper understanding of the workings of a Deep Learning networks