Naive Bayes classification algorithm is a supervised learning technique, based on applying Bayes’ theorem with the ‘naive’ assumption that each feature is independent of other features, which can’t be true in real life. It is quite popular for its simplicity and is widely used for applications like text classification, sentiment analysis, email filtering, recommender systems and many more. Deeper explanations on how it works are out of scope here, since there are many articles and posts out there discussing the fundamentals of this classifier.

Scikit-learn library, the gold standard for machine learning in Python, offers a set of five different Naive Bayes methods, which differ mainly regarding the data distribution. The end user needs to decide the option that suits better on each specific problem. However, traditional CPUs don’t scale so well on bigger data showing a struggle in computational performance. For many applications the performance (mainly latency and throughput) at prediction time of models is crucial. Equally important can be considered the training time, but sometimes it is ignored since it may be done offline in the production. 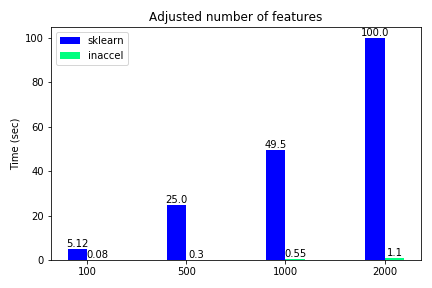 The classification accuracy such as other metrics, are not included in this demonstration, since they were the same on both options and the various use-cases. We notice that only for the binary classification the speedup is relatively ‘small'(3.5x) while for all the other cases where the data become more complex, FPGA solution achieves great speedups reaching up to 100x compared to the software-only execution. Moreover, we kept the samples to some thousands and didn’t scale it to millions since the performance improvement is clear.