Newcomers to data science are often disappointed to learn that the job of the data scientist isn't tweaking and inventing new machine learning algorithms.

In the “big data” world supervised learning has been a solved problem since at least 1951. Some reasons this isn't as well known as one would expect include:

Decision Trees obviously continued to improve after [GordonOlshen1978]. For example: CART's cross-validation and pruning ideas (see: [BreimanEtAl1984]). Working on the shortcomings of tree-based methods (undesirable bias, instability) led to some of the most important innovations in machine learning (bagging and boosting, for example see: [HastieTibshiraniFriedman2009]).

In [ZumelMount2014] we have a section on decision trees (section 6.3.2) but we restrict ourselves to how they work (and the consequences), how to work with them; but not why they work. The reason we did not discuss why they work is the process of data science, where practical, includes using already implemented and proven data manipulation, machine learning, and statistical methods. The “why” can be properly delegated to implementers. Delegation is part of being a data scientist, so you have to learn to trust delegation at some point.

In this note we will look at the “why” of decision trees. You may want work through a decision tree tutorial to get the “what” and “how” out of the way before reading on (example tutorial: [Moore]).

Decision trees are a type of recursive partitioning algorithm. Decision trees are built up of two types of nodes: decision nodes, and leaves. The decision tree starts with a node called the root. If the root is a leaf then the decision tree is trivial or degenerate and the same classification is made for all data. For decision nodes we examine a single variable and move to another node based on the outcome of a comparison. The recursion is repeated until we reach a leaf node. At a leaf node we return the majority value of training data routed to the leaf node as a classification decision, or return the mean-value of outcomes as a regression estimate. The theory of decision trees is presented in Section 9.2 of [HastieTibshiraniFriedman2009].

Figure 6.2 from Practical Data Science with R ([ZumelMount2014]) below shows a decision tree that estimates the probability of an account cancellation by testing variable values in sequence (moving down and left or down and right depending on the outcome). For true conditions we move down and left, for falsified conditions we move down and right. The leaves are labeled with the predicted probability of account cancellation. The tree is orderly and all nodes are in estimated probability units because Practical Data Science with R used a technique similar to y-aware scaling ([Zumel2016]). 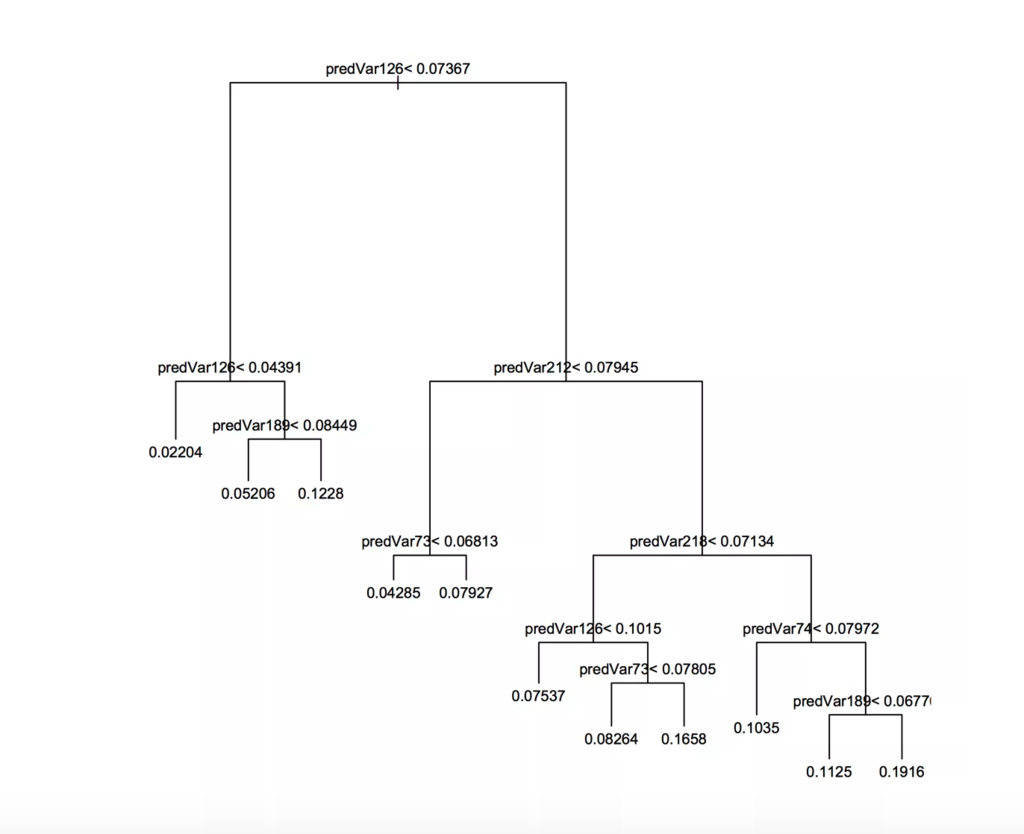 Graphical representation of a decision tree

It isn't too hard to believe that a sufficiently complicated tree can memorize training data. Decision tree learning algorithms have a long history and a lot of theory in how they pick which variable to split and where to split it. The issue for us is: will the produced tree work about as well on future test or application data as it did on training data?