The third annual University of San Francisco (USF) MBA class Golden State Warriors analytics exercise provided an opportunity to test the students’ ability to “Think Like a Data Scientist” with respect to identifying and quantifying variables that might be better predictors of performance for the Golden State Warriors professional basketball team. This was also an opportunity to test and fine-tune the Hypothesis Development Canvas, and boy was that an eye-opener for me. The Hypothesis Development Canvas works, but I need to do a better job of explaining how to use it properly. Here are just a few of my learnings from the USF exercise:

Okay, so we’ll continue to test and continue to refine the Hypothesis Development Canvas.  Oh, the life of a Data Scientist…

Scenario:  You have been hired by Golden State Warriors to review in-game performance data to quantify metrics that predict the keys to the Warriors victories in upcoming games against the Brooklyn Nets (10/28) and the Chicago Bulls (10/29).

Purpose:  Apply “Thinking Like a Data Scientist” approach to identify and quantify variables that might be better predictors of in-game performance. In particular, track how much time the team spends doing the following:

Check out Figure 1 which summarizes the results of the “Golden State Warriors Data Analytics Exercise” 2017 class exercise, and actually provides the first indication that we could create a document to guide our “Think Like a Data Scientist” process. 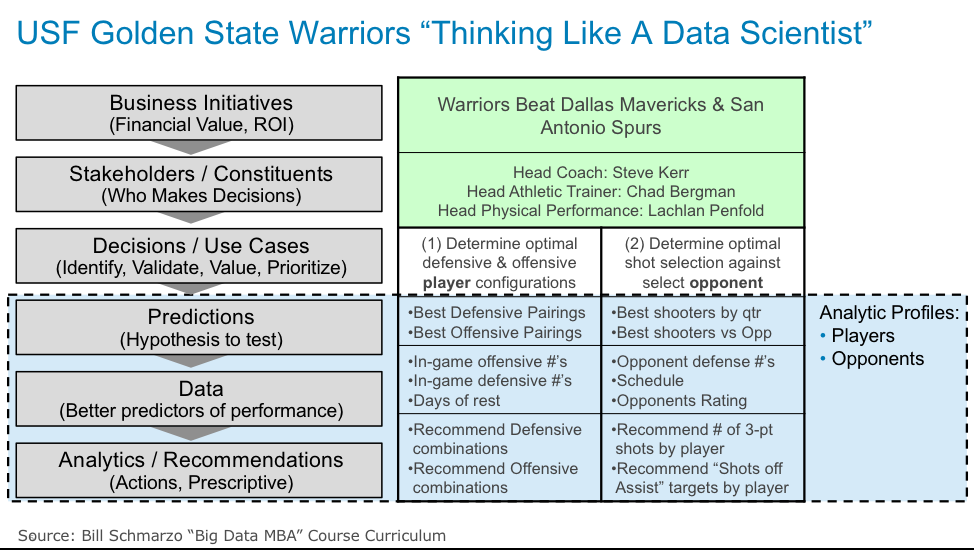 All of the teams got it this year, which was an improvement over previous years when there was a team or two that struggled with the assignment.  I’ve provided just three examples below due to keep the blog concise, but each of the teams did outstanding work. 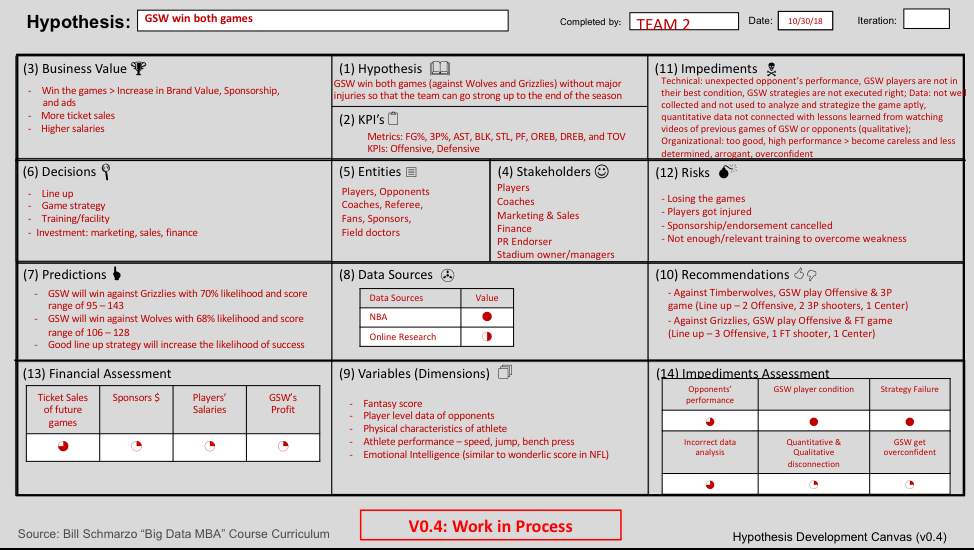 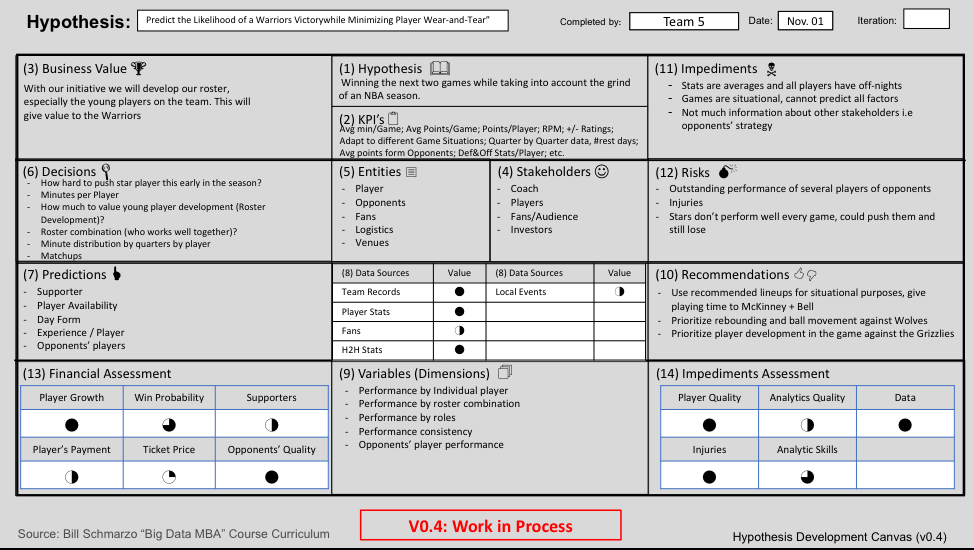 And finally, my version of the Golden State Warrior Exercise Hypothesis Development Canvas: 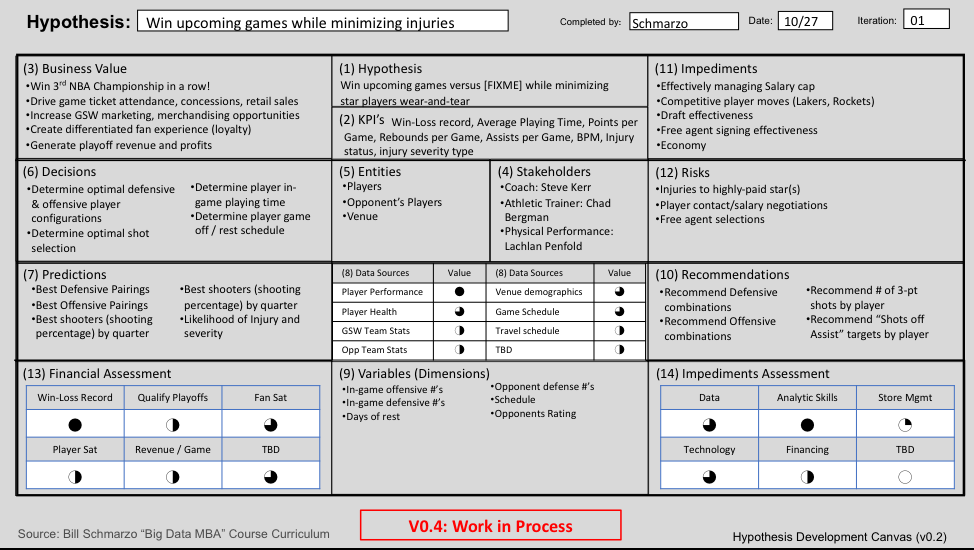 As a bonus contribution, Alex ChandyCEO 2DA Analytics, took up the challenge and contributed the Hypothesis Development Canvas below concerning “Lowering Inventory Costs”. Thanks Alex for being a part of our learning experience!  I love the level of detail he put into the canvas, and I in particular, greatly appreciate his willingness to share his work with everyone else.  Working together, we can share, learn and improve.

Isn’t that the real promise of social media?

I encourage the students to include their work in their portfolios as they look for jobs after graduation!  Each and every one of them would make for an excellent hire – smart, resourceful, hard-working – and they know how to deliver results. 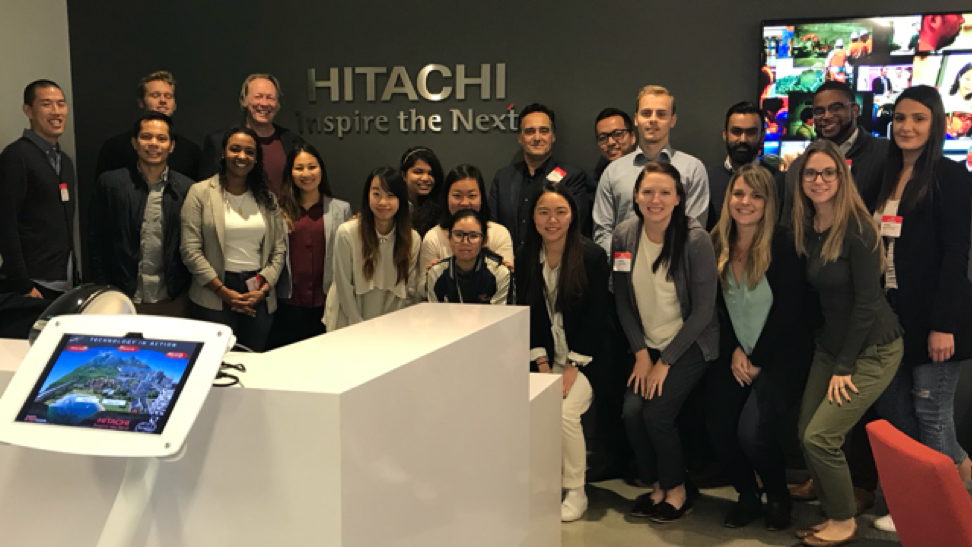