A new study from researchers at The Indian Institute of Information Technology, titled A Simple Agent Based Modeling Tool for Plastic and Debris Tracking in Oceans [1] hopes to address the growing environmental concern of microplastic contamination. Their multi-purpose model is easy to use and understand, making it a valuable educational tool for building environmental awareness. In addition, the model was validated against Malaysian airlines flight 370 crash data, making it a potential tool for future crash debris tracking.

The Problem with Plastic

The study's main focus was on the eight million tons of plastic that end up in the ocean every year. The debris tends to collect in certain areas, called ocean garbage patches. As an example, a massive vortex of microplastics in the Pacific Ocean called the Great Pacific Garbage patch contains 79 thousand tons of floating microplastics inside a 1.6 million square kilometer area.

The discarded plastic jeopardizes marine life in several ways, including decreasing the amount of available oxygen in the water; Marine mammals get entangled in discarded plastic fishing nets, and microplastic ingestion also leads to starvation and ruptured organs. Algae and plankton, the most common source of food in the marine food chain, suffer from decreased sunlight, which threatens communities because algae rely on sunlight for food production [2]. The abundant plastic toxins don’t just threaten marine life, they bioaccumulate as they move up the food chain [3].

It’s impossible to know exactly how much plastic debris is floating in these massive ocean gyres, but scientists do know that discarded plastic travels there. That knowledge came about in part by work from Oceanographer Curt Ebbesmeyer, who tracked the routes of 28,000 plastic bath tub toys dropped overboard from a weather-stricken container ship in 1992. Ebbesmeyer collected a wealth of information over a span of more than 20 years [4]; His research highlighted the difficulties with identifying and retrieving floating debris; despite intense efforts, he was able to track just 3% of the toys. Fast forward to 2021 and data science can help locate and understand the movement of floating ocean debris.

Lack of good data was a major problem for the model developers, but several sources were tapped to provide sufficient data. Surface current data was obtained from the NOAA (National Oceanic and Atmospheric Administration) Global Drifter Program, which gathers data from satellite-tracked surface sailing buoys. Two publicly available datasets were used for plastic debris: Plastic Marine Pollution Global Dataset [5], containing data for the east coast of the USA, and Plastics in the North Atlantic Subtropical Gyre [6] which contained data for debris around Australian shores. This next image shows the logical flow of the model, which is simple to understand and accessible to non-data scientists. This was an important consideration during the study as the hope is the model can be used for education and building general awareness of plastic pollution issues: 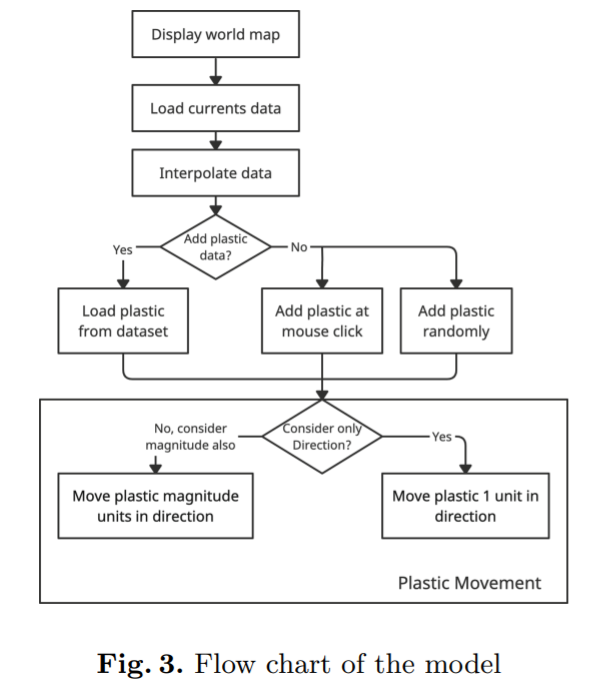 Due to lack of data, model validation was also a challenge for the study. The authors used the only two available data sources that were reliable: flight wreckage tracking data from Malaysian airlines, and data from the Great Pacific Garbage Patch. The model successfully predicted the formation of a pacific patch over a time span of 8 years, which was very similar in shape and location to the Great Pacific Garbage Patch. In addition, the model successfully predicted Malaysian airlines crash debris would end up on the Shores of East Africa, which is the same place where parts from the crash ended up in real life.

[1] A Simple Agent Based Modeling Tool for Plastic and Debris Tracking ...