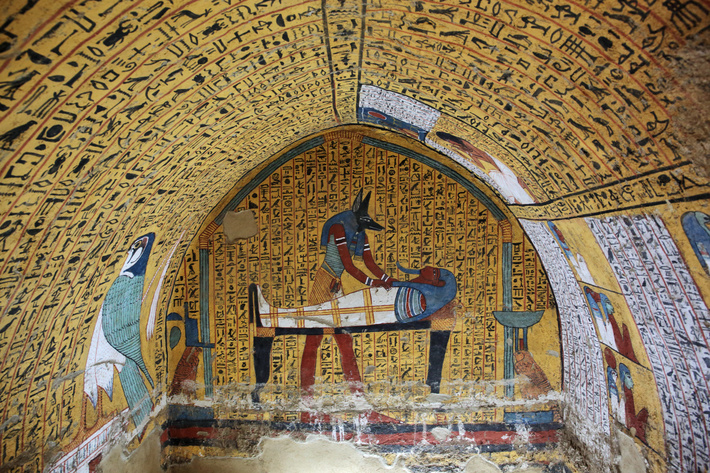 Thanks to the Metaverse, a fully immersive experience to the Wonders of the Ancient World just might be on the cards, without stepping out of your living room. This isn’t a pipe dream; a recent study, published last month in Advances in Ecological and Environmental Research [1], used a “Fully Immersive Virtual Reality Technique” to generate a 1:1 scale model of the Pashedu III tomb, considered to be one of the most stunning tombs from the Pharaonic period. Located at the West Bank of the Nile in Luxor, the tomb is part of the Theban Necropolis.

Although the goal of the study was to create an experience for architectural students, a secondary goal was to provide an opportunity for tourists to walk through tombs alone or with companions. In the wake of the Covid-19 pandemic, this opens up a myriad of opportunities for virtual travel as well as the creation of historical buildings that no longer exist, like the Colossus of Rhodes or Lighthouse of Alexandria.

What is the Metaverse?

The term “Metaverse” was first coined by Neal Stephenson in his 1992 science fiction novel Snow Crash and describes a first-person virtual reality experience. Fast forward thirty years, and the Metaverse has become (almost) reality. In a perfect Metaverse, users share a single virtual world where components of the Metaverse, like property and items, remain the same between online sessions [2]. Mark Zuckerberg described the experience, in his recent announcement of Facebook’s intent to create an embodied Internet, as one where “where you’re in the experience, not just looking at it” [3].

At the core of the Metaverse experience is a head mounted display (HMD) that allows the user to enter the virtual realm. Oculus, a company that produces HMDs for games and immersive experiences, exploded in popularity during the pandemic, growing from “a small team working out of our apartments and garages in California” to a team of 70 developers dedicated to bringing the promise of the Metaverse to fruition [4]. It is the Oculus Quest II headset that is the core of the Pashedu tomb experience.

Creating Pashedu’s Tomb in the Metaverse

With the Pashedu tomb experience, you walk through the tomb wearing the Oculus Quest II headset, giving you a close to real life tomb experience from the comfort of your living room. The results are impressive, as the following image from the study shows.

The first step in the recreation of the tomb was to capture a series of sequential 3D images. Next, a 3D model was created displaying actual tomb dimensions, derived from original tomb facades, plans, and sections; textures were placed on the 3D model by montaging all of the wall textures taken by the image processing program. Audio commentary was added, as well as background music appropriate for the age of the tomb. When these initial steps were completed, interactive movement was programmed in four phases:

The final step was to importing the 3D model into Unity game engine, a cross-platform development platform that requires little to no coding: model textures were assigned, lighting adjusted, and movement logic and restrictions were added inside the tomb environment. Finally, VR related libraries were imported and user movements were programmed so that they responded to movements and commands from the headset and controller.

Before the advent of this technology, creating virtual models was cost prohibitive. For example, Getti Conservation Institute's model of Nefertari’s tomb exceeded a million dollars in cost and and took several years to create [2]. The new technology means that virtual experiences are cost effective to produce; a small team can create a virtual walk through with a few thousand dollars.

Fully immersive virtual copies of other historical locations are on the cards, as well as destroyed buildings like the Great Library of Alexandria. As an added benefit, a virtual visit doesn’t affect the condition of the real tomb. Virtual reality comes with a host of other benefits: it doesn't expose you to Covid-19, empty your bank account, or contribute to greenhouse emissions by traveling. And who wouldn't miss those long TSA lines? For these reasons, and many more, traveling via the Metaverse may very well be the future of tourism.