Most of the classification models output a probability number for the dataset.

E.g. – A classification model like Logistic Regression will output a probability number between 0 and 1 instead of the desired output of actual target variable like Yes/No, etc.

The next logical step is to translate this probability number into the target/dependent variable in the model and test the accuracy of the model. To understand the implication of translating the probability number, let’s understand few basic concepts relating to evaluating a classification model with the help of an example given below.

The fraud observations constitute just 0.1% of the entire dataset, representing a typical case of Imbalanced Class. Imbalanced Classes arises from classification problems where the classes are not represented equally. Suppose you created a model that predicted 95% of the transactions as Non-Fraud, and all the predictions for Non-Frauds turn out to be accurate. But, that high accuracy for Non-Frauds shouldn’t get you excited since Frauds are just 0.1% whereas the Predicted Frauds constitute 5% of the observations.

Assuming you were able to translate the output of your model to Fraud/Non-Fraud, the predicted result could be compared to actual result and summarized as follows:

Confusion Matrix is a popular way to represent the summarized findings. 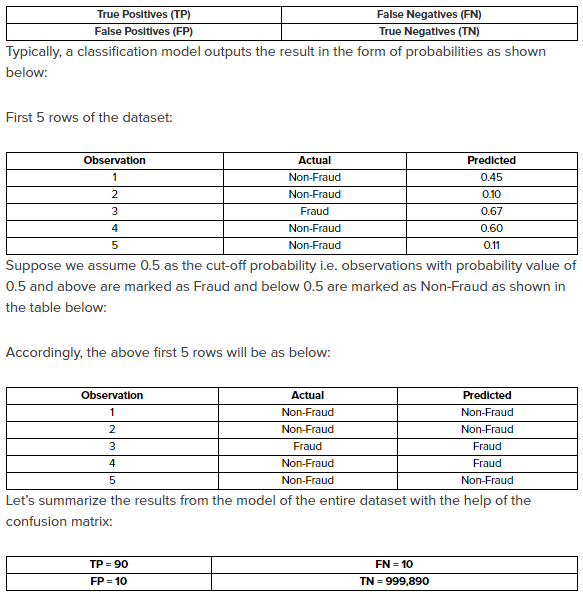 We have all non-zero cells in the above matrix. So is this result ideal?

Wouldn’t we love a scenario wherein the model accurately identifies the Frauds and the Non-Frauds i.e. zero entry for cells, FP and FN?

Consider a scenario wherein as a marketing analyst; you would like to identify users who were likely to buy but haven’t bought yet. This particular class of users would be the ones who share the characteristics of the users who bought. Such a class would belong to False Positives – Users who were predicted to transact but didn’t transact in reality. Hence, in addition to non-zero entries in TP and TN, you would prefer a non-zero entry in FP too. Thus, the model accuracy depends on the goal of the prediction exercise.

Since we are now comfortable with the interpretation of the Confusion Matrix, let’s look at some popular metrics used for testing the classification models:

To read the full original article, including definition and computation examples for these 5 metrics, as well as a section on metric comparison, click here. For more related articles on classification models on DSC click here.