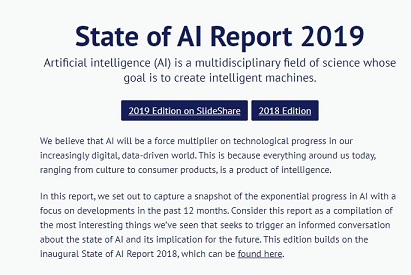 I highly recommend  the #StateofAI 2019 report. I have followed this report from By Nathan Benaich and Ian Hogarth

The report is kind of Mary Meeker theme for AI for me i.e. a great reference :)

here are my notes

The full report has lots of slides charts and diagrams. My notes are text only and what was of interest

AI will be a force multiplier on technological progress because  everything around us today, ranging from culture to consumer products, is a product of intelligence.

What I can say about cleaning, for example, is that if you have animals, you should definitely think about doing frequent scheduled cleaning. It can happen that the dog might defecate on the carpet and so on. I've had that happen before. Yes and basically you need to know how you can clean it up. I found because detailed information about cleaner for dog urine on wood floors . I'm glad I found this information here. I recommend everyone to read it.

Thanks for posting this Ajit. This kind of summary is really useful.  Especially interesting to see the mention of healthcare.  In fact, one of our presentations at predictive analytics world London last October was a team lead of Google Brain's healthcare unit, who talked about deep learning methods for detecting eye disease.