Sure @Thomas Triplet, it's all about checking whether networkX scale with #nodes and #edges, here are some more experiments with bigger networks (friendship and email) that can be found here: https://sandipanweb.wordpress.com/2017/09/22/some-more-social-netwo....

This is certainly useful to learn the basic of graph analysis from a data science perspective, and as such, it is great to see it on Coursera, but, real-life social graph are more like (from FB)

From an engineering perspective, I'm very curious to see how NetworkX in Python is applicable to real-word graphs/networks (vs other dedicated frameworks like Spark GraphX, Neo4J, etc.)...

@Dmitry Zinoviev Thank you very much for the book-link. 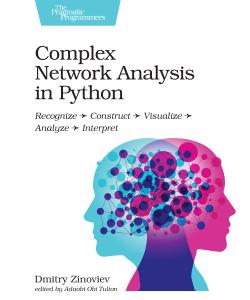 The book covers both elements of complex network analysis (CNA), including social network analysis, and the use of networkx for CNA. It covers not only social networks, but also product, semantic, event, interaction, and other types of networks. It has five complete case studies based on real-world data (including the "Panama papers") and numerous code examples.

The book is available as an electronic beta from the publisher website (or you can pre-order the paper version on Amazon).

@Andrew Ford actually this is part of a few assignments from the coursera course which is still running, so it will be a breach of honor code to share the code here, however, the course is free and anyone can enroll to get a few starter codes.

can you share the code you used for this?