People around the globe are more actively using social media platform such as Twitter, Facebook, and Instagram etc. They share information, opinions, ideas, experiences and other details in the social media. The business communities have become more aware of these developments and they want to use the available information in their favor. One of the ways to understand the people opinions on the product they are using is by collecting tweets related to those products. Then performing the sentiment analysis on the tweets collected on a particular topic. This research focuses on the collection of tweets related the airline services pertaining to the four regions which are Europe, India, Australia, and America region. Tweets related to various airlines from the American regions such as Delta, United, Spirit, Southwest and Jet Blue are collected. From Indian region, airlines are Indigo, Air India, Jet Airways, Vistara and Spice Jet. European airline such as Lufthansa, Air Berlin, Turkish, KLM, and Easy. From Australian region, Virgin, Qantas, Tigerair, JetStar, and Sharp tweets are gathered. The Tweepy is a python library using which the data collection is carried out. Figure 1 shows the collecting tweets pertaining to airlines from the twitter using tweepy.

Using sentiment analysis on tweets the airline services can whether customers have a good opinion or bad opinion about their flights and services. The sentiment of tweets for a specific airline can be analyzed over a period of time and these scores can be plotted against time. The variation in customer opinions and sentiments over a period of time can be observed. The following figure 3 show variation in sentiment score over a period of one month for Australian airlines such as Virgin, Qantas, Tigerair, JetStar, and Sharp. The mean sentiment score for each airline is plotted for each week for a month time. This plot is a good indicator of whether customer have a good opinion or there is any fluctuation in the sentiments. The most common sentiment words will help the airline company identify their better performing aspect or the aspect that they have to improve upon. The most common negative terms in the tweets for an airline helps to understand that aspect the company has to improve. The most common positive terms in the tweets make companies pride on. These are the best-appreciated terms by the customers. The companies like to improve upon negative terms and at the same keep their most appreciated aspect intact. Figure 5 shows most positive terms occurred in the collection of tweet for the various airlines. 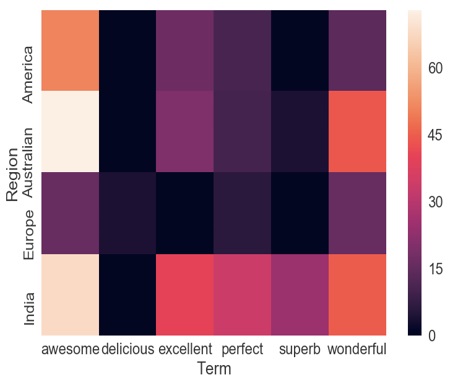 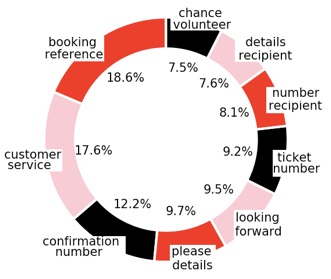