Hybrid Quantum-Classical Computing (HQCC) (a.k.a. Variational Quantum Eigensolver (VQE)) is often touted as one of the main algorithms of Quantum AI. In fact, Rigetti, a Silicon Valley company which for several years has provided cloud access to their superconductive quantum computer, has designed its services around the HQCC paradigm.

HQCC is often symbolized by a feedback loop between a quantum computer and a classical computer. 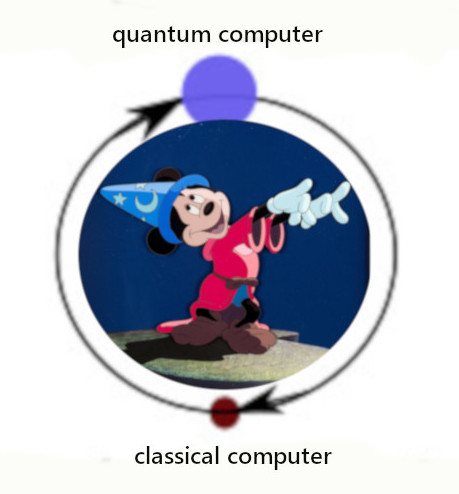 Consider the chain rule for conditional probabilities. For the case of a probability distribution P() that depends on 5 random variables x0, x1, ..., x4, one has

This last equation can be represented graphically by the following bnet, a "fully connected" DAG (Directed Acyclic Graph) in which an arrow points into xj from all its predecessors xj-1, xj-2,..., x1, x0 for j=1, 2, ...,4: 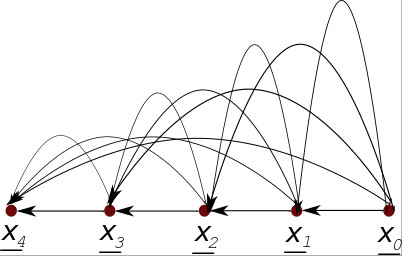 For definiteness, we have chosen the number of nodes nn=5. How to generalize this so that nn equals any integer greater than 1 is obvious.

Henceforth, we will represent a random variable by an underlined letter and the values it assumes by a letter that is not underlined. For instance, x= x.

Mathematicians have a rigorous definition for a random variable, but for the purposes of this blog post, a random variable is just the name given to a node of a bnet. This will be true for both classical and quantum bnets.

The arrows in a bnet denote dependencies. The fully connected bnet given above contains all possible dependencies. When each node depends only on its immediate predecessor, we get what is called a Markov chain. The Markov chain with nn=5 is:

bnets are technically acyclic graphs, so feedback loops are forbidden. However, as long as you understand that the following diagram should be "unrolled" into a Markov chain in which there are 2 types of nodes (the ones with an even subscript and the ones with an odd subscript), one can represent this special type of Markov chain with two types of nodes by the following diagram, where j=0, 1, ..., nn-1: 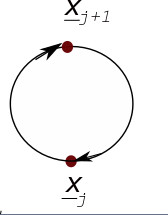 This last diagram is a special case of what is called in the business, a dynamical Bayesian network (DBN). An early type of DBN that you might already be familiar with is the famous Kalman filter.

Note that in this brief intro to classical bnets, we have only used discrete nodes with a discrete random variable xj for j=0, 1, 2, ..., nn-1. However, any one of those nodes can be easily replaced by a continuous node with a continuous random variable xj. A continuous node xj has a probability density instead of a probability distribution as its transition matrix P(xj| parents of xj), and one integrates rather than sums over its states xj.


Next, we will review some basic facts about quantum bnets.

Born's Rule says that in Quantum Mechanics, one gets a probability P by taking the absolute value squared of a complex-valued "probability amplitude" A. In other words, P=|A|2.

To define a quantum bnet, we write a chain rule for conditional probability amplitudes (A's instead of P's). For example, for nn=5, one has

This chain rule can be represented by the same diagram that we used above to represent the fully connected nn=5 classical bnet. However, note that now
node xj has a complex-valued transition matrix A(xj|parents of xj) instead of a real-valued one P(xj|parents of xj). For that reason, henceforth, we will represent quantum nodes by a fluffy blue ball instead of the small brown balls that we have been using to represent classical nodes.

Just like we defined Markov chains for classical bnets, one can define them for quantum bnets. In both cases, every node depends only on its immediate predecessor. For a quantum Markov chain with nn=5, one has

which can be represented by the following quantum bnet:


In this section, we will consider coherent and incoherent sums of quantum bnets. For simplicity, we will restrict the discussion of this section to quantum Markov chains, but everything we say in this section can be easily generalized to an arbitrary quantum bnet, including the fully connected one.

Suppose we have a classical Markov chain with nodes x0, x1, ..., x4 and we want to calculate the probability distribution P(x4) of its last node. One does so by summing over all nodes except the last one:

This last equation can be rewritten in terms of amplitudes in the equivalent form:

(Footnote: The quantities called P(x4) and P(x3) in the equations of this section might require normalization before they are true probability distributions.)

The last 2 equations can be represent using dynamical quantum bnets, as follows:

(Footnote: One can also consider 2 diagrams like the last 2 diagrams, but with
Also, nn itself is usually very large to allow convergence to an equilibrium distribution of P(xnn-1) and P(xnn-2), and nn can be either odd or even.)

The graphical part of the last two diagrams can be represented by the following feedback loop:

This last feedback loop is equivalent to the feedback loop with the Fantasia cartoon of Mickey Mouse that we started this blog post with and that we described as a pictorial representation of HQCC.