Pros and Cons of using Python for Web Development 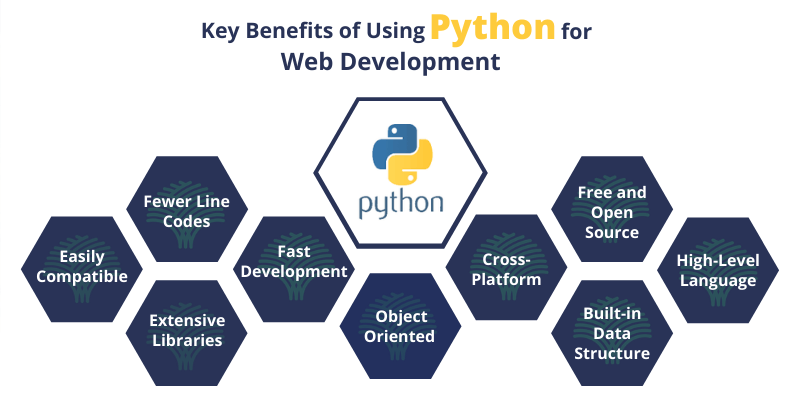 Python is the world’s third most popular programming language in February 2021, according to TIOBE’s index. It grew over 1.52% since January. Its massive demand in the past few years is a result of its diverse applications. Python is now widely in use for Machine Learning, Data Science, Neural Networking, and more. Today, Python for web development is increasing as companies look forward to advanced applications that can fulfill enterprise-grade requirements.

But Python is still not fool-proof. It is still considered heavy against Ruby on Rails, which can enable rapid web application development. In this article, we will focus on the following -

A Python web development roadmap, like this guide, will help you determine whether you choose the programming language for your next project or not. Let’s dive into the details.

When you ask what is Python used for in web development, the simple answer is - all of the above. Python developers can integrate these applications and combine them to build high-advanced projects.

Let’s have a look at why Python is now heavily used by companies for applications.

Pros of Python for web development

Apart from this, Python is highly powerful. The object-oriented nature of Python makes it a perfect server-side scripting language as well. But is it suitable for all applications? Python has its disadvantages as well.

Cons of Python for web development

Now that we understand Python’s importance and benefits, it is safe to assume that it is perfect for web application development. However, it is not foolproof. Python may be a leading programming language, but it lags in certain aspects. Here are the cons of Python web development projects -

That being said, Python is also not suitable for smaller applications and systems. The dynamic nature of the programming language is not acceptable for building software products that require less time. Python is perfect for scalable applications, but its simplicity for complex applications is also an inherent weakness.

Python programming in healthcare is changing how doctors and clinicians approach patient care delivery. Here’s why Python for healthcare is the right choice for better health outcomes.

Let’s look at the kind of projects that Python is suitable for.

When is Python the right choice?

The next best thing you should know is the type of projects that Python is good for.

Generally, Python is perfect for enterprise-grade applications. Whether you want a dashboard for internal systems management or a centralized portal for customer engagement, Python can build them with ease. The massive power of Python comes in handy to write complicated code with ease for such applications.

In this regard, web development becomes easier for companies. You can also combine web applications with data science capabilities and reap the maximum benefits of Python. Today, Python is useful for building apps with chatbots, AI bots, pattern recognition, and predictive analytics to deliver the best results to their stakeholders.

Here’s a case study that shows how a music traveler company uses Python to connect musicians with places where they can practice their art.

Python is also a powerful programming language for big data. The multiple library support of Pandas, TensorFlow, NumPy, SciPy, etc., is essential for applications that require data analytics and computing. In fact, Python web development has such high processing speed in big data that it enables maintaining maximum transparency while simultaneously building the application.

Combined with agile project management, building a Python web development roadmap becomes simple. Because of its iterative nature and flexible development process, Python is useful for MVPs that require frequent releases. The easy code maintainability allows Python developers to release new versions of the applications without any hassle.

Python comes with a host of features that make it the perfect general-purpose programming language. In today’s world, Python can be easily said as the go-to-programming language for all applications. Even though Python web development frameworks may have some limitations in terms of speed and processing, if you have the time and money for a quality application, Python is your companion.

Python’s popularity is on the rise. There’s no denying the fact that it will play a significant role in modern applications. Along with R, Go, and Scala, Python, would be the game-changer in web applications. Apart from being useful in rapid prototyping and building enterprise-grade apps, it would change how Machine Learning algorithms are written. There are disadvantages to it, but they are more of initial limitations rather than long-term issues.

If you can get past them, a quality application is waiting for you. You can connect with Python experts at BoTree Technologies, a leading Python software development company, for more information on how you can use Python for your business applications.

Design Restrictions is the main thing because if a website design is not user friendly then user will not stay on the website.

Yeah, there is no doubt that Python is an essential part of any business. Python is just placed on the top of rankings. We are to use it 'cause it does scale our businesses.