The main idea of support vector machine is to find the optimal hyperplane (line in 2D, plane in 3D and hyperplane in more than 3 dimensions) which maximizes the margin between two classes. In this case, two classes are red and blue balls. In layman's term, it is finding the optimal separating boundary to separate two classes (events and non-events). 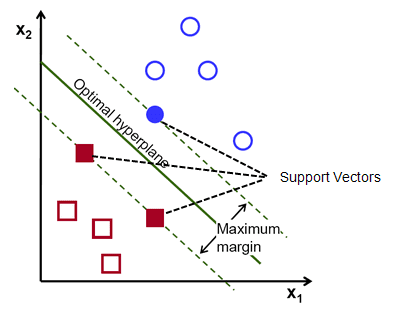 Support Vectors are observations that supports hyperplane on either sides. In the image above, filled red and blue boxes and circles are support vectors.

Hyperplane is just a line in 2D and plane in 3D. In higher dimensions (more than 3D), it's called hyperplane. SVM help us to find a hyperplane (or separating boundary) that can separate two classes (red and blue dots).

It is the distance between the hyperplane and the closest data point. If we double it, it would be equal to the margin.

How to find the optimal hyperplane?

How to treat Non-linear Separable Data?
Imagine a case - if there is no straight line (or hyperplane) which can separate two classes? In the image shown below, there is a circle in 2D with red and blue data points all over it such that adjacent data points are of different colors.
SVM handles the above case by using a kernel function to handle non-linear separable data. It is explained in the next section.
To check out the full article, click Here