“Alone we can do so little and together we can do much” - a phrase from Helen Keller during 50's is a reflection of achievements and successful stories in real life scenarios from decades. Same thing applies with most of the cases from innovation with big impacts and with advanced technologies world. The machine Learning domain is also in the same race to make predictions and classification in a more accurate way using so called ensemble method and it is proved that ensemble modeling offers one of the most convincing way to build highly accurate predictive models. Ensemble methods are learning models that achieve performance by combining the opinions of multiple learners. Typically, an ensemble model is a supervised learning technique for combining multiple weak learners or models to produce a strong learner with the concept of Bagging and Boosting for data sampling. 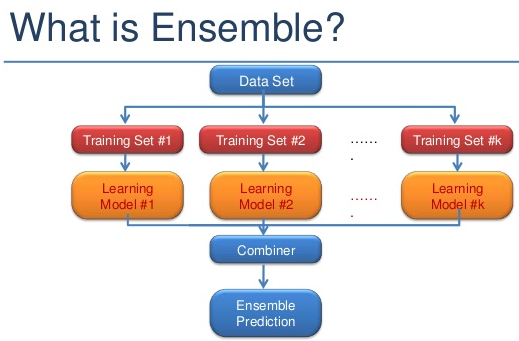 Bagging or Bootstrap aggregation of sample data can be used for reducing the problem of overfitting and also variance. It is a special case of model averaging by generating additional data for model to learn most effectively from our original dataset using different combinations to produce multi-datasets of the same size as our original data. It is the case of taking some sample data uniformly and with replacement without generating arbitrary data. The type of bootstrap sampling is expected to have the fraction (1-1/e) which is nearly equivalent to 63.2% unique records and other being duplicates. This concept is mostly used in decision tree methods.

Multiple boosting algorithms are available to use such as AdaBoost, Gradient Boost, XGBoost, LPBoost, BrownBoost etc. Different boosting algorithm has its own advantages over different types of dataset. By tuning multiple algorithms with a wider range of input data, classification or good predictive modeling can be build.

For example, Adaboost performs well in case of binary class classification problems. But it is sensitive to noisy data and outliers.

The steps followed for Adaboost algorithm:

In case of continuous variables regression booster such as the Gradient boost algorithm is suitable.

Stacking is a different approach of combining multiple models with the concept of meta – learning. Though the appraoch don't have empirical formula for weight function the final functionality is same as bagging and boosting.

The steps followed in Stacking approach:

Which models should be ensemble

Let us consider models A, B and C with an accuracy of 87%, 82%, 72% respectively. Suppose, A and B are highly correlated and C is not at all correlated with both A & B. In this type of scenarios instead of combining models A & B, model C should be combined with model A or model B to reduce generalized errors.

Proper way to identify the weight of different models:

In ensembling approach some standard way should be used while giving weight to different models.

Few of the techniques are:

Ensemble method is a combination of multiple models, that helps to improve the generalization errors which might not be handled by a single modeling approach.