Summary:  Data Science is the secret sauce that turns the dumb internet into the smart internet driving changes in society as fast as we drive changes in the internet.  The best place to find data on this is Mary Meeker’s Internet Trend Report 2018.  Here we use that data to look back at the last year and forward a bit in time to see what impact data science is having. 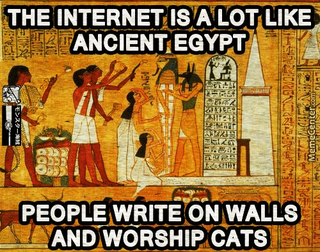 What does the internet run on?  It’s been compared to a highway that carries billions of cars.

It’s been compared to a vast plumbing system that carries water.

It’s been compared to the neurons in a brain that carry electronic impulses.

Whether its cars or water or impulses, we all understand those to be a metaphor for data.

But does data just go wherever it wants?  No.  Is it guided by the people who sent it?  Not actually.

The internet, the one that behaves like streets and highways has crude rules like stop signs, merges, right of way, and maps that tell where and how data can go, or could go.

But what makes the internet smart, and really, really valuable is data science.  It’s data science that creates the smart rules about

Without the smart rules created by data science the internet is nothing more than a fancy telephone or telegraph.  At best, an information retrieval system but only if you know the specific piece of data you want and exactly where it’s stored.

Why the big digression into bad metaphors?  Because it’s that time again for Mary Meeker to look into her crystal ball of data and tell us how the internet is doing.

It’s fine by the way.  Thanks for asking.

A little bit of that change is driven by hardware and network technology like 5G.  The vast majority of that change, in both directions, is driven by the huge number of data science innovations birthed by countless startups or the fully mature flagship companies that we can all name.

Ms. Meeker as you should know is the grand poohbah of the internet.  She’s also a partner in the VC firm Kleiner Perkins and is acclaimed by Forbes to be the 84th most powerful woman in the world.

She started issuing her annual Internet Trends reports in 1995.  This year is Internet Trends 2018 and continues to be one of the most anticipated and well regarded deep dives into what has become the electronic backbone of the world’s societies.

All of which is to say, we should pay close attention to what she says about the recent past, and especially to what she foresees about the near future.

Ms. Meeker mostly just describes how the internet and society are changing one another without regard to the contribution of data science.  Our angle will be to look behind what she says is happening and see if we can make some extension into our own profession.

(The source for all the following displays in this article is Ms. Meeker’s Internet Trends 2018 report)

The internet, just like data science, appears to have abruptly entered into maturity.  The dramatic growth spurt of adolescence ended for both probably in about 2016.

As we observed in What Comes After Deep Learning, 2017 was the first year in which we saw no breakthroughs in data science.  Some valuable incremental improvements, but not the same sorts of whiz bang excitement from prior years.

For the internet, the issue is that 50% of the world’s population, about 3.8 Billion people are already on line.  Take away the kids under 10 or 12 and the percentage is probably a lot higher.

Getting the remaining 3.8 Billion on line requires network access and hardware devices like at least smartphones.  It’s simple economics that this next 50% is going to be much tougher than the first half.  Smartphone makers, dominated by China, can make increasingly less expensive units but those sparse and far places still require a network that may be even the greater challenge.

That didn’t stop the rest of us from spending even more time on line. 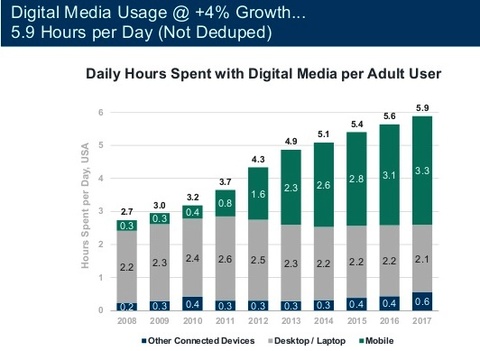 OK Data Science, take a bow.  It’s increasing ease of use, engaging content, personalization, and value in everyday life that continues to draw us into more hours of screen time.

Not to mention the submerged part of the iceberg, which includes IoT signals from connected devices including Alexa, Nest thermostats, connected homes, and advances in real time health monitoring.

There are two broad categories here.  The first is increased levels of usefulness.  Included in that group are rapidly expanding features (mostly outside of the US) like messaging and payments.  The second category is increasing opportunities for connectedness.

Facebook and Snapchat may be the original poster boys for connectedness but innovation continues in new forms of video, speech, and even community (e.g. Nextdoor now has about 175,000 active neighborhoods, a 3X increase in three years).

All the same, this trend begs the question of how much is too much?  At some point this has to level off or we will deserve our increasing reputation as screen zombies.

When a market approaches saturation and there are fewer new customers to entice, the cost of each new customer goes up.  The importance of retaining customers and valuing them based on their lifetime value becomes the new critical KPI. How Are We Paying for all this Innovation?

In the new data economy everyone clearly understands that the terrific improvements we see and are not paying for out of our own pockets are driven about 90% by advertising dollars (Facebook and Google) and about 10% by better competitiveness through decreased cost (Amazon).

The good news is that innovation has also allowed increasing revenue per user so we can increase investment in things getting better faster. 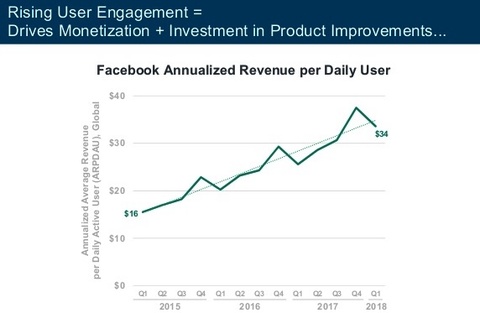 Paul Virilio, the author of this headline goes on to explain that for example invention of the car results also in the automobile accident.  The original example was Kurt Vonnegut’s book Ice9 in which he invents a substance that unintentionally turns everything to ice.  The unintended consequence of innovation.

So the bad news is that as services get better, the use of our personal data becomes more obvious and that’s made some of us nervous.  A few well-placed complaints to our political elite, and voilà, we have GDPR.

Part of the public’s concern is simply having so much data exposed and on record.  On the one hand it’s a little scary when your phone keeps a permanent record of your physical location and travels the better to tell you where the nearest Chinese restaurant is.  On the other hand, who really wants to steal terabytes of my personal travel data?

The other part of the public’s concern appears to be about the possibility of bias that might influence some high impact decisions like who gets a loan, insurance, a good school, or bail.  As we wrote recently, when you actually look for examples of bias, it’s hard to find.

Given how sweeping GDPR is and how yet untested, let us hope that regulators in the EU will watch for unintended consequences and not throttle innovation or further balkanize the internet.

There is talk about how some etailers are becoming so dominant that we should think of them as monopolies.  But monopolies are companies that use their size to disadvantage the consumer.  E-Commerce, thanks to the tools of data science is actually reducing consumer prices. I’m sure I don’t have to spell out the types of advanced analytics that enable these big 7 tools of e-commerce.

The Internet is Changing Employment This brief recap doesn’t nearly cover the waterfront of Ms. Meeker’s analysis and observation.  For example, we haven’t even touched on the price transparency that the internet is gradually bringing to healthcare by publishing and allowing direct comparison of prices.  Be sure to read it for yourself.

Your takeaways should be these:

Mary Meeker, Analytics, and the Future of the Internet  (2016)