I have been writing about the Crosswave Differential Algorithm for a number of years. I described in previous blogs how the algorithm emerged almost by accident while I was attempting to write an application intended to support quality control. In this blog I will be discussing the event model that powers the algorithm. Events are the details and circumstances surrounding the numbers used in calculations. A metric such as revenues might be disconnected from the ideas and circumstances that brought about purchasing decisions. Events provide the story behind the numbers. However, there are an infinitesimal number of events. It is necessary to recognize those events might later be found relevant. An "event model" is the means by which event selection occurs.

It is important to note that metrics are often "amplitudinal" in nature. When a numbers is expressed, sometimes its amplitude gains recognition. For example, if I purchase a bag of 12 oranges, these oranges are not identical to each other. The 12 does not refer to the oranges themselves since they are dissimilar unless of course they are cloned; but rather the quantity 12 refers to the number of oranges. This count of 12 could refer to 12 bananas or pears. The oranges, bananas, and pears are not the same except for quantity. Alternatively, metrics might be about "frequency" rather than any aspect of magnitude. An event on the other hand need not have amplitude or frequency; it is "essential" in nature. Essence might include colour, weight, shape, and sweetness along with quantity or frequency.

There are a number of ways to think of essence. The usual ingredients for a hamburger include a beef patty, lettuce, cheese, pickles, onions, and a bun. If I eat a hamburger, the event might be eat-burger. But is this not eat-beef-patty, eat-lettuce, eat-cheese, eat-pickles, eat-onions, and eat-bun? Some might argue that eating a hamburger means eating a full burger; for another person, the event might be invoked in relation to eating half a burger. If salt or special sauce is added, perhaps this is a completely different thing than the original burger; or, perhaps it is the original burger plus a separate event entry for the salt or special sauce. Possibly eat-burger only applies to a burger eaten at a fast-food restaurant. Somebody else might be fine using the event for burgers made at home.

In the discourse surrounding essence, quantities for amplitude and frequency are unlikely to cause mental strain: these are relatively simple and minor points compared to the epic dimensions of the event horizon. Yet, at times quantities are essential. Eating two burgers is certainly quite different than eating one. Eating the same burger twice is also quite different than eating the burger once. Should a separate event be invoked each time two burgers are eaten or each time a burger is eaten twice? The event model requires that the user strategically construct events in order to "catch" important phenomena giving rise to metrics. This is not a straightforward journey; I never meant for it to be. The road is intended to be challenging. Those that attempt to solve problems merely as mathematical equations seem likely to fail.

The following example demonstrates the ontological difficulties surrounding the essence of events: [drink_salabatgingermix_1300] is an event that I use to describe a powdered ginger beverage from a packet. This packet contains ground ginger that is flavoured with lime and sugarcane. However, when I boil fresh ginger from the root, I am more likely to invoke [drink_gingertea_2200]. There is a question as to whether the mix should be invoked separately or together with the tea. Is the ginger genuinely separate by virtue of form? Under laboratory conditions, such a question seems unlikely to be asked since the treatment would be rigidly controlled. However, in real-life conditions, such distinctions require some deliberation. Eggs and milk can be found as ingredients in many foods. When should these things be recognized as separate items or as part of something else such as cake? Some people allergic to eggs might want sufficient delineation in the data to allow for the detection of eggs. Suffice it to say that reality can become complicated when addressing the essence of things.

Events do not simply emerge. They are invoked. The invocation pattern does not have to be congruent with the metrics - although at times it might be. In order to discuss the speciation of events from systems theory and the use of systems theory as a narrative for ontological purposes, I would like to share a story of a fictitious prehistoric creature that I call the Squibblefish as portrayed in its crudely-drawn natural habitat below. Some would say the Squibblefish resembles a banana with legs. However, as a college science instructor once emphasized, an organism generally has a mouth, gut, and outlet (an anus). The Squibblefish has all of these things. It is certainly a plausible life form. The Squibblefish is a system: there is a mouth for input; a gut for processing; and an outlet for output. Metrics can exist for many reasons that are not necessarily bound to a cohesive narrative; for this reason, it generally lacks a structural foundation. While one can project metrics, the relevance of this projection to the realities of production is questionable. Consequently, the event model is fashioned from systems - as an anchor. 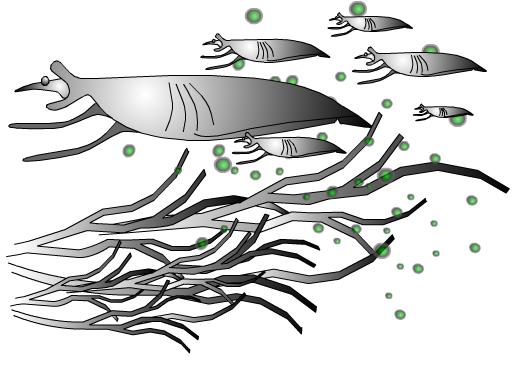 The emphasis on the mouth, gut, and outlet is problematic in that this structure doesn't really resemble organizations such as corporations. In organizations, something triggers the acquisition of raw materials, manufacturing, and production. It is necessary to step away from the physicality of the Squibblefish and focus instead on functions of the body. Clearly from a functional standpoint, the brain plays an important role generally preceding the consumption of materials. This intelligence regulates the organism. How does it do this? In light of my experience working for different organizations, I would say that the market responds to the products produced by the organization. The organization on the other hand responds to the market. In systems theory, there is a biofeedback mechanism that seems to herald the evolution of intelligence. At least, this is a reasonable perspective to explain how systems theory works for organizations. The process of production begins not at the mouth but the mind. 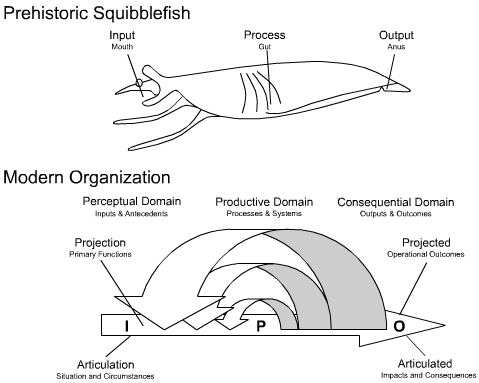 The spawning of events follows the narrative: assessment, input, production, output, and impacts. An organization can therefore deal with an adverse impact in different ways: the most immediate would be to stop output; the most permanent would be to alter perceptions. It is not necessarily within the role of a department to spawn events outside its domain of responsibility; but if it fails to do so, the impacts of specific structural manifestations within that department would likely become invisible to the rest of the organization. Conversely, if other departments within the organization refuse to accept events generated by other parts, in effect the organization's primary means of adaptation becomes impaired. The intelligence that holds the organization together begins to erode. At least this is the story that I am sharing with readers.

Use of the Crosswave Differential Algorithm

A sample of crosswave differential data appears below along with the charts. I hope readers notice that the chart exhibiting a differential resembles that algorithm's logo. The chart is from another blog that I posted where I used a simulation to show how SG1's offworld outcomes can be determined by the colour of jello that team members eat. I realize this makes no sense at all for those that haven't read the blog. Essentially, once a body of events is connected to a particular metric, those events can be investigated to determine their impacts to the metric. The impact of an event is determined by the differential between two crosswaves. Each crosswave - one for treated (T) and another for untreated (U) - shows the crossing between the "forward (+)" and "reverse (-)" of a distribution of events. Irrespective of the nature of the events - i.e. ignoring nature - a relative comparison is made of differentials. In this manner, install-new-toner might appear on the same curve as hire-new-employee - along with many thousands of other events - either as a packet of data or perpetual stream. 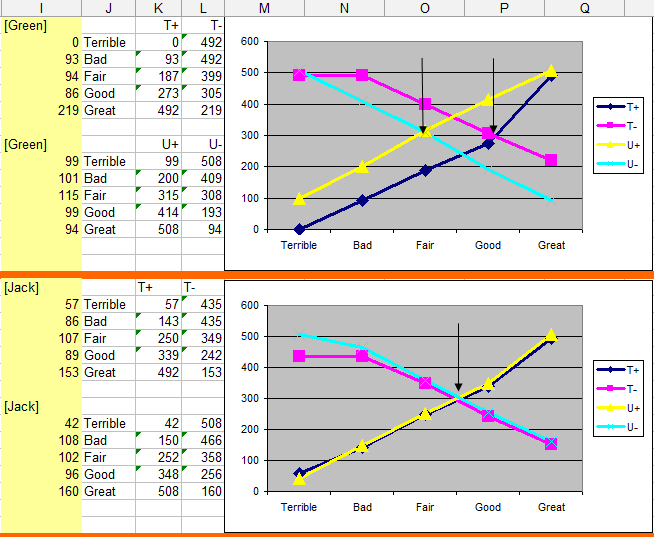 The algorithm is compatible with the use of metadata - serving the same role as events. However, it is important to note that metadata does not always have a cohesive narrative. One does not necessarily know what to do with the results regardless of differential placement by the algorithm (its X-Delta). Refer to the sample below to see how a large number of event differentials can be presented simultaneously with certain flagged items in order to demonstrate a thematic bias. It is the narrative (an abstract ontological pattern) that gives events the ability to provide structural details once associated with a metric. I created the event model after recognizing that event design, selection, and deployment play a critical role in the operations of the algorithm. With my apologies for not making the algorithm's software available to the data science community, I hope that these blogs help to foster a spirit of exploration and innovation. 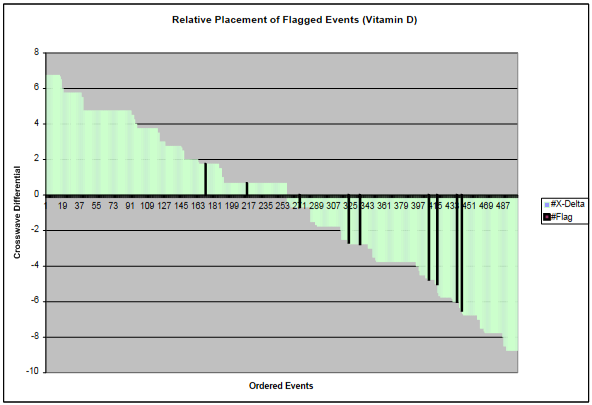