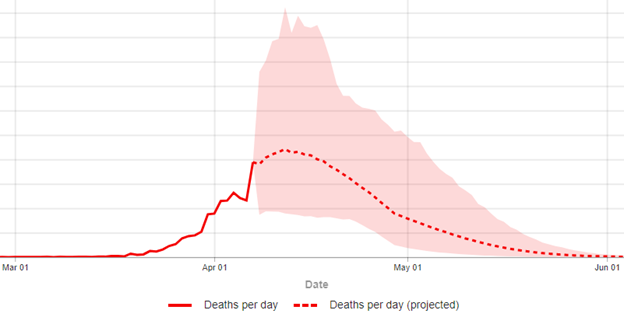 Different models -- and different runs of the same model -- may differ both in their structure and their assumptions.

The 2.2 million deaths prediction by the Imperial College model was from a run that assumed no social distancing of any sort was implemented -- that the virus was allowed to run wild. Other runs of the model examined other scenarios with increasingly strict social distancing measures; they simply didn’t make the news.  The Imperial College model assumed that each infected individual would in turn infect, on average, 2.5 other people. More recent estimates from Europe suggest this assumption should be higher, which would increase the impact of social distancing.

SIR models can take changing conditions into account by tweaking key parameters and assumptions at the discretion of the analyst, whereas statistical curve-fitting models do so by re-fitting the curves as new data become available. SIR models provide the tools to explore what could happen, given different future conditions, and are most useful before much data is available.  Statistical models are necessarily grounded in data -- on what has happened – and usually prove more accurate as events unfold.