Coding vs Programming – What’s the Difference? 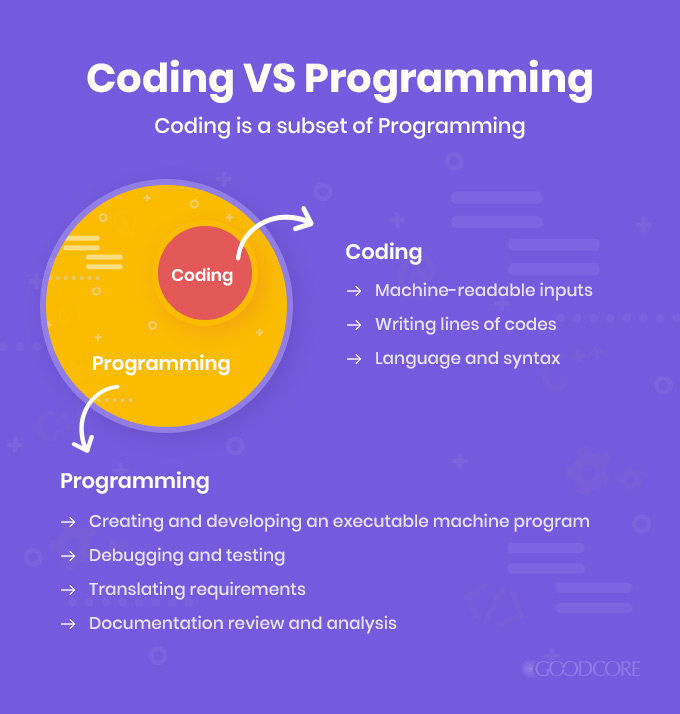 The Difference between Coding and Programming are explained in the below-mentioned points:

Coding only deals with the codes and so it is less intimidating and less intensive. On the other hand, Programming deals with a program to control and interact with the machine to produce proper results.

Coders are mainly used to translate the requirements and their logic into a language that machines can understand whereas Programming deals with much more than that. It’s not only used to analyze and develop the codes but also engage all the different artifacts to make the system perform in a proper way.

Coding is the initial step of developing any software and thus it is much easier and simpler to analyze and understand than Programming. Programming deals with different types of complex scenarios and programs to ensure the proper implementation of the product.

Coders only translate the requirement logics into a machine-understandable code without worrying about the details. But on the other hand, Programmers use to analyze and conceptualize different aspects of any program and also solutions to any problems that may or may not occur due to the process. It works on a much broader aspect than coders.

People often confuse coding and programming and use these two terms interchangeably. Let’s just get this out of the way now — they’re not the same thing, and in fact, they are quite different.

The purpose of this article is to define both of these terms clearly, so there can be no mistake, and find out what the difference is between coding and programming.