Building a Recommendation System for the Cooper Hewitt Design Museum

Contributed by Belinda Kanpetch. She graduated from the NYC Data Science Academy 12 week full time Data Science Bootcamp program taking place between April 11th to July 1st, 2016. This post is based on her final class project - Capstone(due on the 12th week of the program). The original article can be found here.

The Cooper Hewitt Design Museum houses an impressive collection of designed objects that chronicle the history and significance of design in our evolving world. These objects range from unrealized works of architecture to handwoven textiles from Africa to graphic designed posters that reflect the culture and pulse of humanity of their time.

The museum is housed in the former mansion of Andrew Carnegie. Upon its completion in 1901, the sixty-four room mansion was the first private residence in the United States to have a structural steel frame that allowed for more expansive spaces and a feeling of lightness. The Carnegie Mansion was also the first private residence to have a residential elevator, central heating, and a precursor to central AC. This legacy of innovation carries through today and is vibrant in the most recent renovation and reconceptualization of the museum. 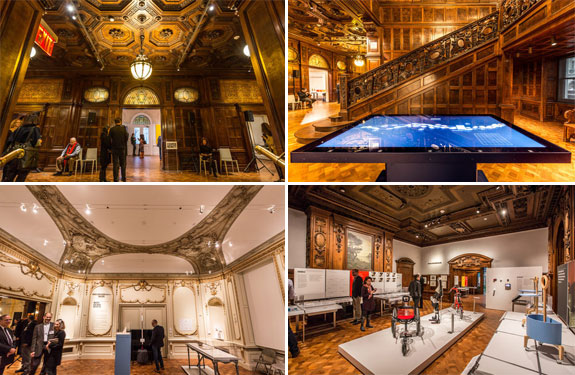 In 2014 the Cooper Hewitt Design Museum reopened its doors after a 3 year renovation that included not only a renovation of the building itself but a reconceptualization of the museum experience. The implementation of The Pen, issued to each visitor, enables the visitor to scan objects that they like or inspire them, allows the visitor to participate in the immersion room and process lab, both spaces in which a visitor can draw or sketch out their own designs as they are inspired by the collection around them. Additionally, the visitor can take their experience beyond the museum walls by accessing their visit online after they have left.  This interactive participation is in stark contrast to the typical passive experience; a one-way conversation of knowledge transfer from the museum to the visitor through signs or ‘tombstones’. In my opinion, the integration of technology and data into the visitor’s experience has repositioned the cultural institution into a space of conversation and active participation between the artwork and patrons. 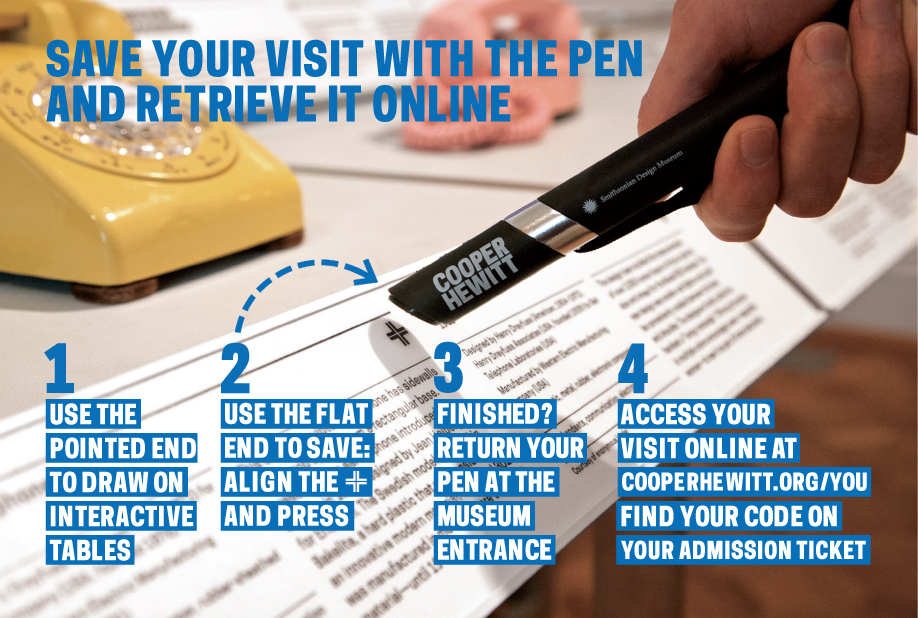 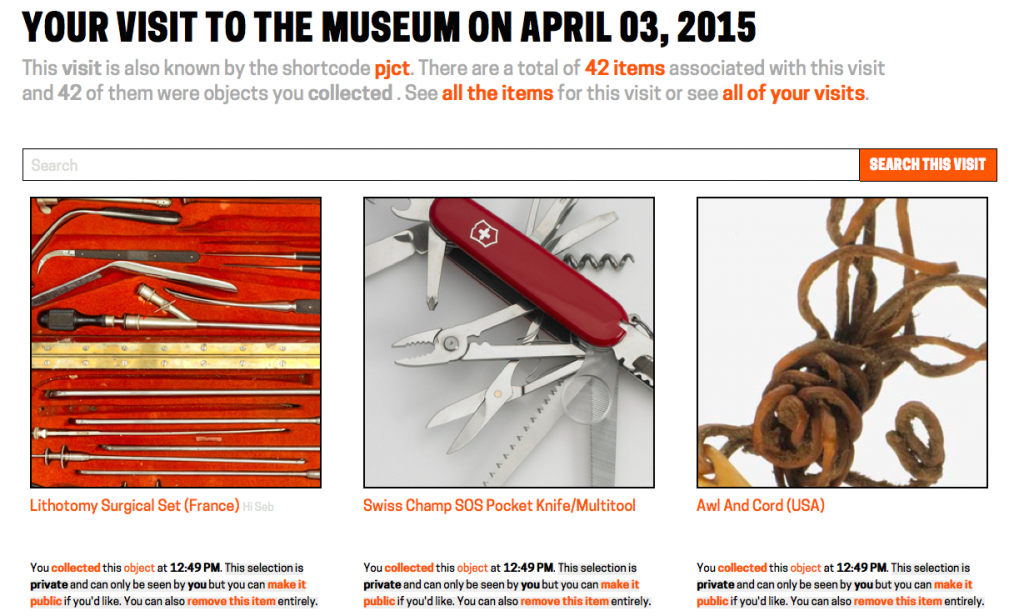 Furthermore, data collected from The Pen provides some exciting opportunities for analysis and inquiry:

The API developed by the museum is a phenomenal opportunity for anyone interested in the museum to access their collection, exhibitions, cafe openings, graphic color schemes, or integrate museum information in apps.

Play with the recommendation app prototype.

Explore the Cooper Hewitt Museum github repository. So much to play...

The data was collected from the Cooper Hewitt’s github repository as a snapshot of the collection items that have been digitally archived. This did not include all of the items in their collection as they are constantly updating the repository. Two CSV files were downloaded and imported as data frames into R:

There were some challenges with the object data frame features; namely tag, medium, type. I had hoped to use these features to do basic EDA to understand the distribution of collection based on medium or type; i.e. to understand if the collection was predominantly architectural, graphic design or textiles, etc. Unfortunately these features were not useful in analysis because they were not distinct categories but rather the multitude of unique values too vast to be useful. For instance, the feature type contained 6 different variation for a category glass of which their distance values were differentiated by capital and lowercase letters.

Of the useful and distinct features Department and WOE Country (country of origin) basic EDA reveals the distribution of objects mostly in Drawing, Prints and Graphic Design with most of the objects originating from the US, France, Germany, and Italy. With a bit of knowledge of design history this makes sense with the influence of the Italian Renaissance, German Bauhaus movement, the French Beaux-Arts, and contemporary design of the the Americas. 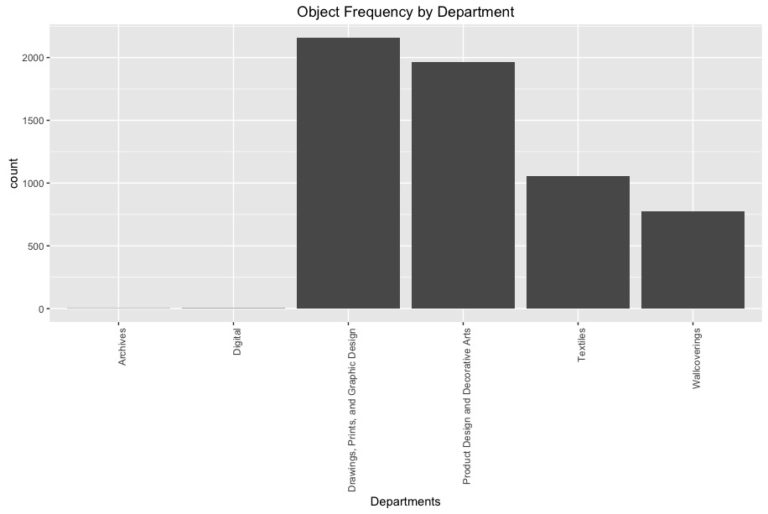 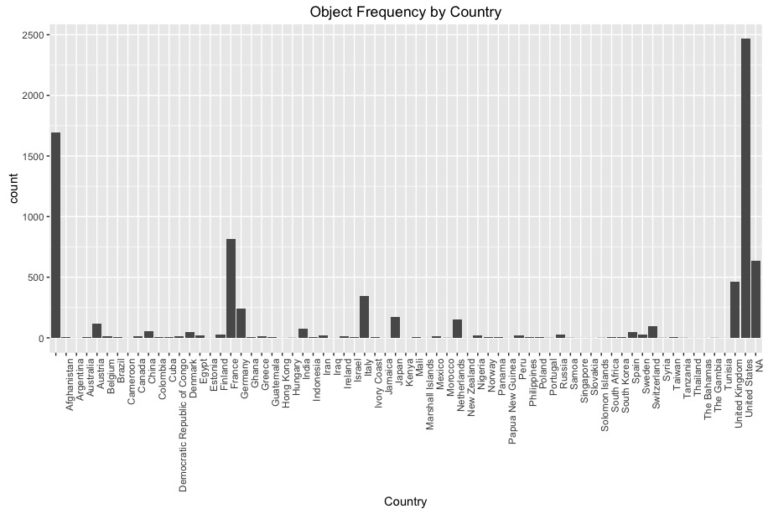 The visitor pen data consisted of a data frame with two features: bundle ID (unique visit ID) and object ID.  If a visitor scanned more than one item each item (or scan) was recorded as an observation along with its corresponding bundle ID. 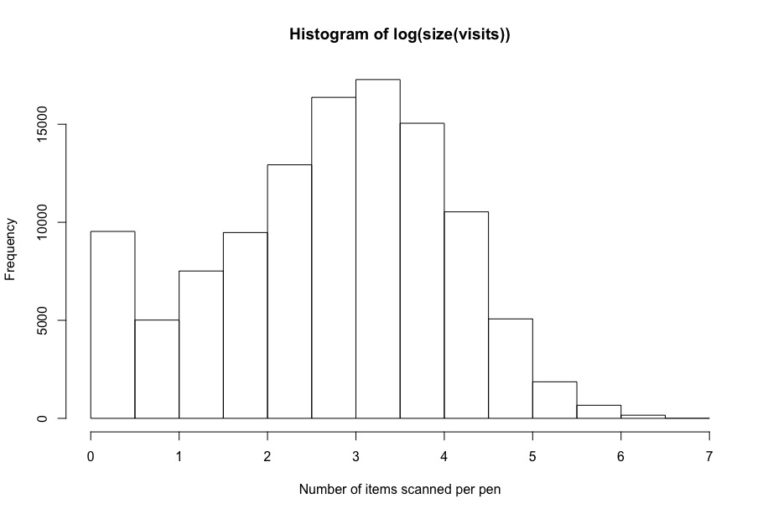 User-Based Collaborative Filtering is a memory based algorithm that makes recommendations based on patterns of similar users, or neighbors, that are identified by employing k nearest neighbor algorithm. A sparse binary matrix is constructed with columns representing unique items, rows representing each user, and populated with 1 if the user ‘liked’ the object or 0 if otherwise. All columns are summed up, the k nearest neighbors are identified (highlighted in blue), items liked by the active user are removed from the recommendations (red ‘x’) and recommendations for the active user (highlighted in yellow) are made of the remaining items in which their sum is greater than 0.  A detraction of this method is its computational cost.  All data must be read into local memory and similarities calculated between all users. My attempts at training a User-based CF model were unsuccessful as all session were timed out. 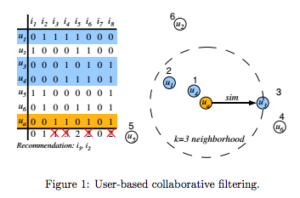 Item-based Collaborative Filtering is a model based algorithm that makes recommendations based on relationships between items in the rating matrix assuming the active user will like items that are similar to the items they liked. Like association rules mining, a similarity matrix is constructed with unique objects in each row and column and populated with similarity measures determined with either cosine similarity or Pearson correlation. Items that are similar to the ones liked by the active user (highlighted in blue) are identified and columns summed up. Items that were liked by the active user are removed (red ‘X’) and remaining items with sum greater than 0 are recommended. 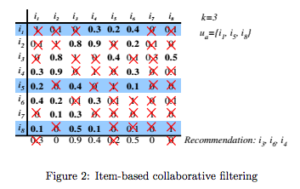 The recommenderlab package allows the combination of several trained algorithms into a hybrid model. After training individual item-basedCF and AR models successfully with recommenderlab I trained a hybrid model that attempted to combine user-basedCF, item-basedCF, AR, random and popular methods. Although I was able to train the hybrid model, making predictions was unsuccessful and errors returned.  Evaluation of the hybrid model and its methods are depicted in the ROC curve graph below.  Association rule mining out performed the other methods with item-based CF coming in close. It is a concern that the TPR of the overall model is low and is cause for further investigation but my inclination is that this is due to the extreme sparsity of the binary matrix. 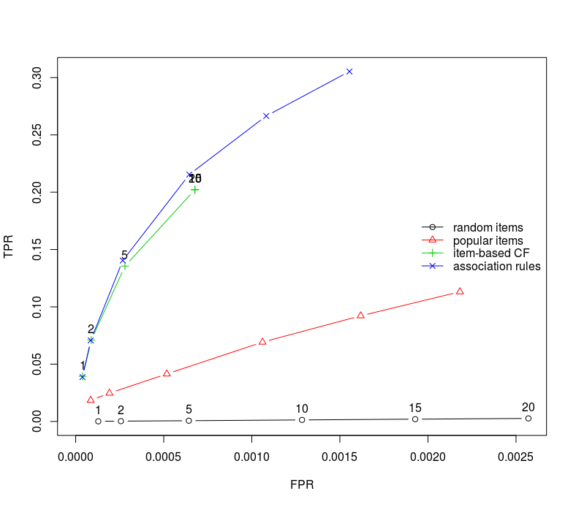 A detraction of the recommenderlab is that I could not inspect the rules that the AR method of recommenderlab finds and therefore the arules package was employed to train additional model for analysis.  Utilizing the same pen data, an  AR model was learned, yielding 1218 rules from parameters support = 0.075 and confidence = 0.8. 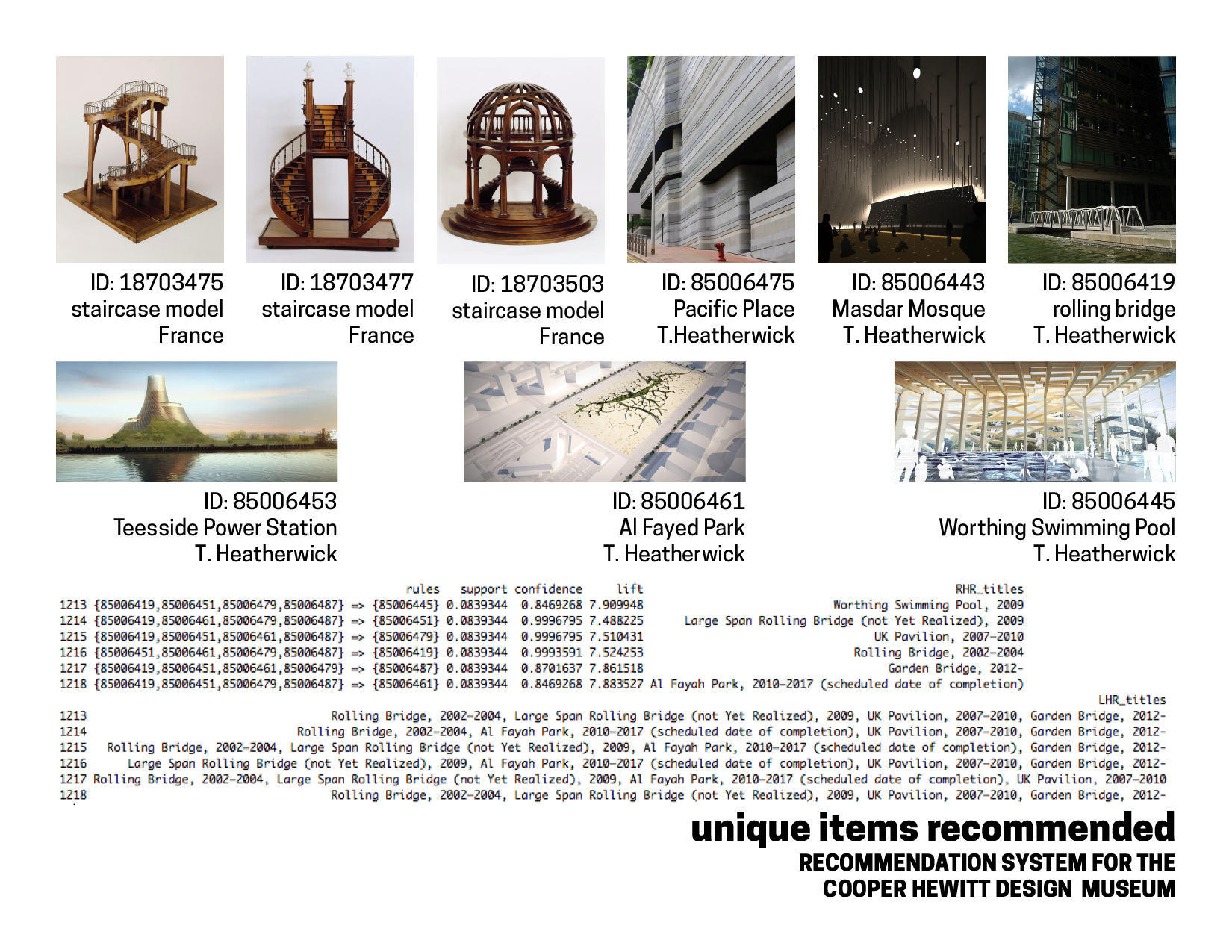 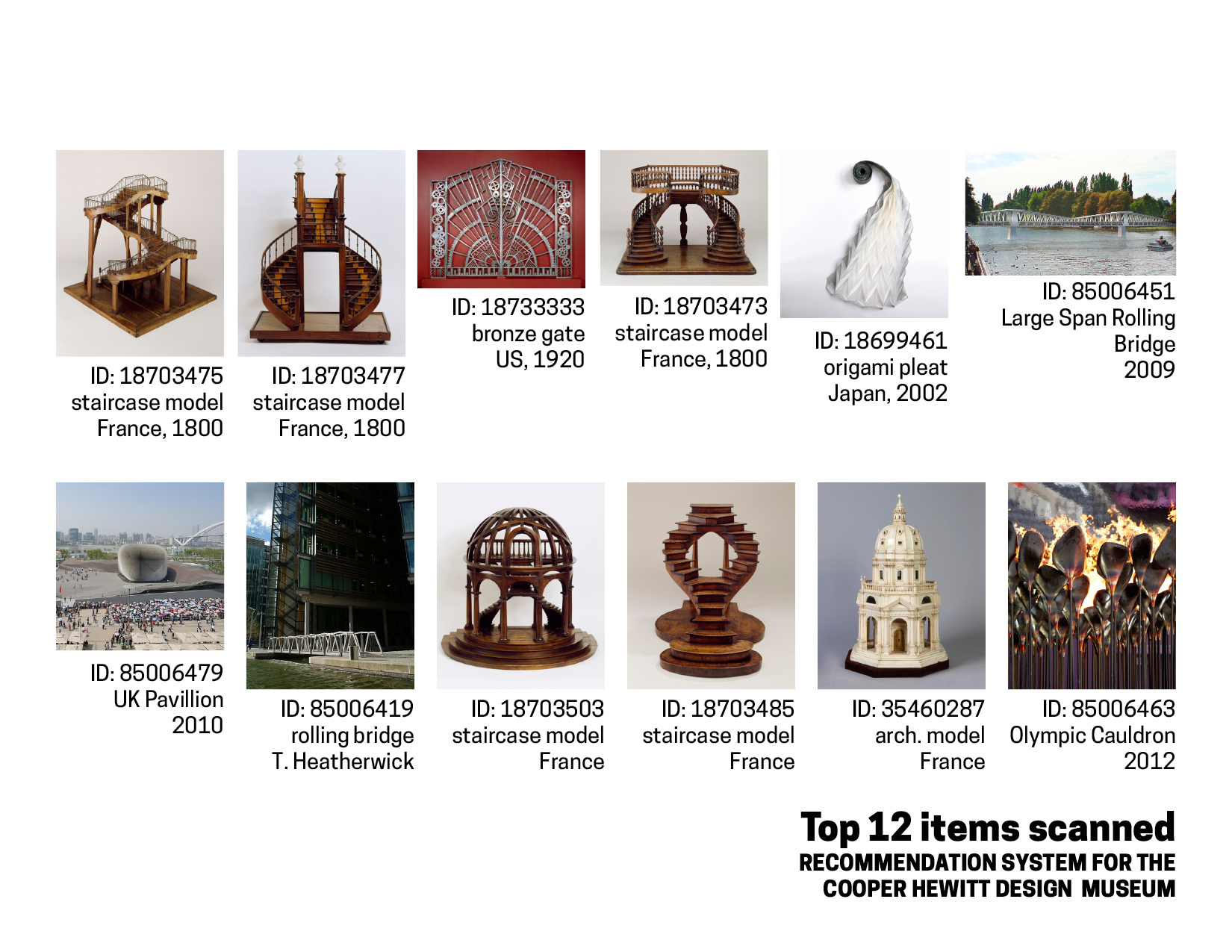 A prototype was implemented in shiny to simulate how the recommendation system might work. The active user is shown 5 images in which they can select 'like' or 'eh' if they don't find the object that interesting. From these selections the app will return five recommended objects utilizing the item-based collaborative filter algorithm. The active user also has the option to subset the items shown based on a particular decade they are interested in or objects from a particular country of origin. Play with the recommendation app prototype. 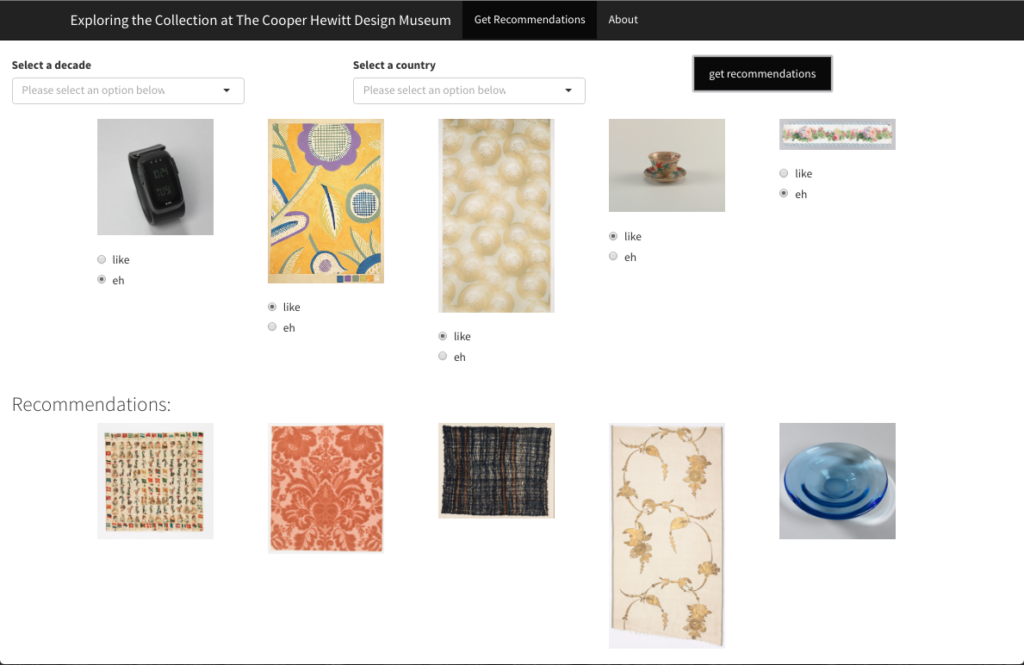 In the spirit of prominent cultural institutions, I would like to thank the following individuals for their generous contributions of support in bringing this project to life: Zeyu Zhang, Kyle Szela and his BFFL Joe, Ho Fai Wong, and Christopher Peter Markis for their continued encouragement and brilliance throughout this project.