The objective of this paper is to present the process of building a Deep Learning Model for optimising the output for a Production Process from a Training sample using Weka Multilayer Perceptron. The scope is limited to implementation only and does not cover the theory behind Artificial Neural Networks. The Genetic Algorithm is specifically developed and adapted for the kind of data involved and is dealt with in detail

This work is the outcome of a comprehensive prototyping and proof-of-concept exercise conducted at Turing Point (http://www.turing-point.com/) a consulting company focused on providing genuine Enterprise Machine Learning solutions based on highly advanced techniques such as 3D discrete event simulation, deep learning and genetic algorithms.

Predictive Analytics is the process of extracting information from the data for predicting future trends. There are a number of Machine Learning approaches available to model the behaviour.

Other Machine Learning techniques learn from training samples by emulating Human cognition. They are often employed in complex situations wherein the underlying mathematical relation is far too complex or hard to identify. Artificial Neural Networks or Multilayer Perceptron, Naïve Bayes Classifier, K Nearest Neighbour are some of the other known Machine Learning Techniques.

Deep Learning is a rapidly growing area of Machine Learning based on the knowledge of the human brain and development of statistics and applied maths over the past several decades. It focuses on algorithms that aim at extracting higher levels of abstractions in data using Artificial Neural Networks with multiple hidden layers.

The training sample should contain samples that would represent all possible variations in data. For example if the dataset contains just 2 inputs A and B, each of which taking a range of values say from 0 to 10000 units and assuming that both the A & B independently impact the Output. Then we need to have representative samples of variations in data as represented in Table 1 The Shotcrete spraying is concerned with the attributes in the first 5 columns for the output in column 6 of Table 2. The samples should capture variations in parameters so as to build a model that closely represents the way the 5 inputs affect the outputs. With this is view 182 samples were collected.

The Multilayer Perceptron of the Weka Machine Learning Tools from the University of Waikato, New Zealand is used for building the neural network model.

A number of experiments were performed with multiple hidden layers. It was found that networks with 3 hidden layers (and hence a deep neural network) was able to perform much better in training and emulating the actual behaviour than the ones with 1 and 2 hidden layers respectively. The training aspect, the ability to reach global minima and the performance will be covered in the next section.

Figure 1, Figure 2 and Figure 3 cover some of the neural network architectures experimented with, having 1, 2 and 3 hidden layers respectively. 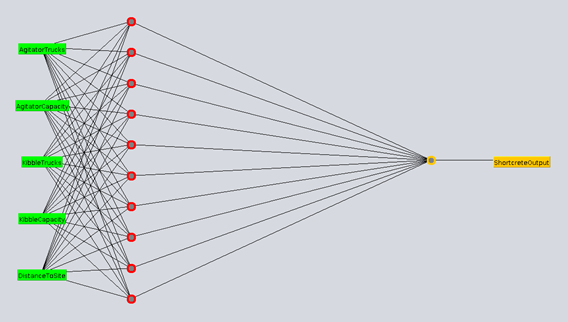 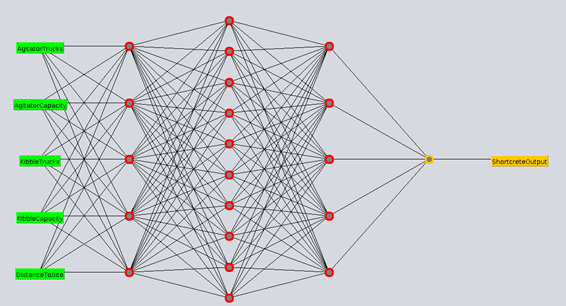 Figure 3 Neural Network with 3 hidden layers having 5,10 and 5 neurons respectively in each layer

The training criterion is to reach global minima wherein the error on Epoch does not change significantly over several thousands of Epochs. To achieve this, the number of epochs was set at 50,000,000.

Learning rate and Momentum needed to be adjusted as well. If not, the errors were found to increase after to getting to the minima or oscillate around some value.

Weka Neural Networks use backpropagation algorithm. Without going into details of this algorithm (as it is beyond the scope of this paper) it is sufficient to state that there are two phases to each epoch:

After some experimentation, training was found to be effective with the following parameters:

The errors were computed for each of neural network architectures in Figure 1, Figure 2 and Figure 3 respectively.

For the single hidden network layer architecture described in Figure 1, the errors are as follows:

For the architecture having 2 hidden layers described in Figure 2, the errors are as follows:

As can be seen above the deep architecture with 3 hidden layers yields the minimum error and hence has been chosen for predicting the Shotcrete output.

Having identified the model that would emulate the behaviour of Shotcrete Production process, the next goal is to identify the combination of Agitator trucks, Agitator capacity, Kibble trucks, Kibble capacity and the distance to site that would maximise the Shotcrete output. One way to do is to perform an exhaustive search of all possible combination of the inputs and use the neural network to predict the output values. This would require extensive computation and may not be practicable in situations involving a large number of parameters.

Genetic Algorithm provides good search heuristic that helps in narrowing down the search for optimal solutions. These algorithms are based on the theory of evolution of organisms, that survive the changing environment as described below:

The “mating” of these 2 data points (aka Chromosomes) results in the children. A random crossover point between 1 and 10 (the total number of attributes in each data point) is generated. For the sake of this example in question let the cross over point be 4.

The idea is that the children generated from the mating of chromosomes with high fitness scores are highly likely to be good performers and thereby reducing the search for top performers. The fitness of the children data points generated this way can sometimes surpass the parent chromosomes as well. The process of creating new generations of candidates is continued till a threshold level of generations is reached wherein no further improvement in the ‘fittest’ can be achieved.

The algorithm was run starting from the training set. The fitness was found to improve for 2 generations followed by 10 generations (the threshold level) of no improvement The best performers list and the fittest candidate were generated using the algorithm above.

The following chart shows the plot of the predicted and the actual values of the Best Performers along with predicted and actual fittest candidates. As can be seen the predicted value very closely follows the actual behaviour and is quite reliable in identifying the attributes required for maximising Shotcrete output.

The objective of this paper is to demonstrate the process of developing a Deep Learning Model to predict and optimise parameters that would lead to maximising a process out. Shotcrete Process was taken as an example but the methodology is same for any other model construction. The following were the key learnings:

The implication of Section 4.1 "Gathering Training Sample Data" is that the five attributes are directly controllable. If that is that case, and you choose the attribute settings as you suggest, then you have a very nice Designed Experiment, the data from which may be used to directly develop (and validate) a quantitative model without the vagaries of Neural Networks (number of levels, number of nodes, converging on weighting factors...not to mention the "blackbox" nature of a neural network) .