Last week, I taught a cybersecurity course at the University of Oxford case. I created a case study for my class based on an excellent recent paper: Deep Learning-Based Autonomous Driving Systems: A Survey of Attacks and Defences (link below)

driving systems (ADSs). I felt that this is significant because typically the problem domain of AI and cybersecurity is mostly an Anomaly detection or a Signature detection problem. Also, most of the times, cybersecurity professionals use specific tools such as splunk or darktrace(which we cover in our course) – but these threats and their mitigations are very new. Hence, they need exploring from first principles/research. Thus, we can cover newer threats such as adversarial attacks(making modifications to input data to force machine-learning algorithms to behave in ways they’re not supposed to). By considering a complex and emerging problem domain like ADASS we can discuss many more emerging problems which we have yet to encounter at scale.

A deep learning-based ADS is normally composed of three functional layers, including a sensing layer, a perception layer and a decision layer, as well as an additional cloud

The perception layer contains deep learning models to analyze the data collected by the sensing layer and then extract useful environmental information from the raw data for further process.

These are depicted below 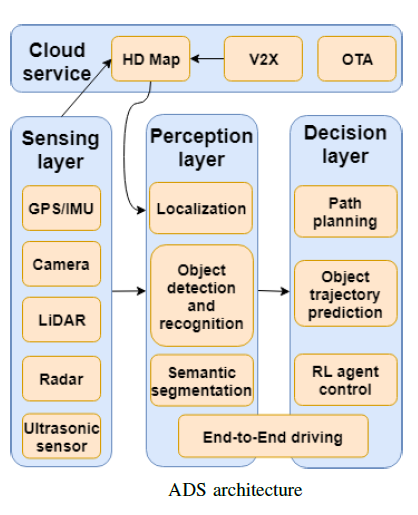 Based on this, the paper explores the below

The threats are as below

The paper link is