You might be using Bayesian techniques in your data science without knowing it! And if you're not, then it could enhance the power of your analysis. This blog post, part 1 of 2, will demonstrate how Bayesians employ probability distributions to add information when fitting models, and reason about uncertainty of the model's fit.

Grab a coin. How fair is the coin? What is the probability p that it will land 'heads' when flipped? You flip the coin 5 times and see 2 heads. You know how to fit a model to this data. The number of heads follows a binomial distribution, and because 40% were heads, the most likely value of p is 0.4, right?

That's almost certainly not the value of p, of course. You don't really believe that you hold a biased coin, do you?

There are two ways to get to that answer, and you might be using one or both as a data scientist without being aware of it. This post will explore the frequentist and Bayesian way of looking at this simple question, and a more real-world one. We’ll see how the Bayesian perspective can yield more useful answers to data science questions because it lets us add prior information to a model, and understand uncertainty about the model’s parameters.

Maximum Likelihood Estimation and the Frequentists

p=0.4 actually is the best answer in a certain sense. Under the binomial model, it's the p that makes the observed data most likely. It's more likely to see 40% heads with a coin that lands heads 40% of the time than 50% or 10%. Knowing nothing else, the best guess is that 40% of future flips will land heads.

This approach seeks the value of the parameters (here: just p, the probability of heads, but more generically denoted θ) that makes the data most likely (here, the 2 out of 5 heads, but more generically denoted X). This is the maximum likelihood estimate (MLE) and is a so-called frequentist view of fitting a model. In the language of probability, that’s p(X|θ), and the goal is to find θ that maximizes it. This is attractive because here, p(X|θ) follows a simple binomial distribution, specifically Binomial(5,p).

That answer is unsatisfying, because it just seems unlikely that a normal-looking, government-minted coin is actually so biased. To do better, we need to capture that intuition.

Mean A Posteriori and the Bayesians

There's another way to look at this: maximize p(θ|X). Given the data, why not find the maximum value of the parameter’s distribution? It sounds like the same idea, and sometimes leads to the same answer, but flips the problem around entirely. 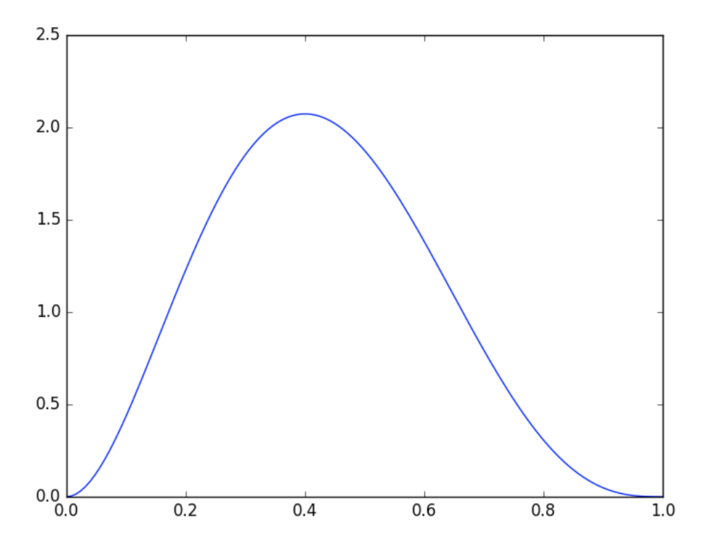 The most likely value occurs at the distribution's “peak”, or mode, and this value is called the maximum a posteriori estimate (MAP). Fortunately the mode is easy to compute from its parameters. Plug in to the formula and find that it’s (3-1) / (3+4-2) = 0.4.

That obvious answer is sure sounding like the right one, but it still doesn't feel right. One bonus of this approach is that it yields a whole distribution for the parameter, not a single point estimate. The wide dispersion of this distribution indicates a lot of uncertainty about the value of the parameter, when it doesn’t seem that uncertain.

p(X) can be ignored for purposes of maximizing with respect to θ as it doesn't depend on θ. It's sufficient to maximize p(X|θ)p(θ). That's merely what the MLE estimate maximizes, p(X|θ), times p(θ). The new term p(θ) is the probability of the parameter, irrespective of the data. That's a problem and an opportunity. It can’t be deduced from the data. It's a place to inject external knowledge of what the distribution of the parameter should be: its "prior" distribution, before observing data.

If we know nothing about θ, then all values of θ are equally likely, before. p(θ) is then a flat, uniform distribution. p(θ) becomes a constant, and maximizing p(θ|X) is the same as maximizing p(X|θ). That's why the MLE and MAP estimates were the same; the MAP estimate implicitly assumed a flat prior, or, no prior knowledge about the parameters. That assumption is easy to overlook, and here it doesn’t sound right.

You do know something about coins in your pocket. You presumably believe they're very likely to be very close to fair and unbiased.

It turns out that it's convenient in this case to use a beta distribution again to represent that knowledge (technically: it’s an easy choice because it’s the conjugate prior for the binomial distribution). Recall the last 50 coins you've flipped in your life; let’s say that 27 were heads. That information could be encoded as a Beta(28,24) distribution. Values near 0.5 are much more likely under this analysis. The result matches expectations better because we injected our expectations! If the coin really was unfair, it would take much more evidence to overcome prior experience and make values of p far from 0.5 likely.

Priors and Regularization
The Bayesian approach has some advantages over the MLE / frequentist approach:

You may already be using these features without knowing it -- in particular, priors.

It turns out that this directly corresponds to assuming a prior distribution on the coefficients, a normal distribution with mean 0, and variance that corresponds to the strength of the L2 regularization. You've been asserting, with L2 regularization, that coefficients are most likely 0, and might be a little positive or negative, but probably aren't very positive or very negative.

The coefficients are constrained by the prior and end up smaller in the second example. Although the model is not fit here with Bayesian techniques, it has a Bayesian interpretation. The output here does not quite give a distribution over the coefficient (though other packages can), but does give something related: a 95% confidence interval around the coefficient, in addition to its point estimate.

By now you may have a taste for Bayesian techniques and what they can do for you, from a few simple examples. Things get more interesting, however, when we see what priors and posteriors can do for a real-world use case. For part 2, please click here.

Conjugates are optional only if they exist or (fixed dimensional) sufficient statistics exist for the likelihood function p(X|θ). If non-informative priors are only left then consider using Jeffreys, reference, probability matching, or empirical Bayes priors. One can place almost any type of optimality condition on a prior and develop it

I don't know where in the post where the approach taken by a frequentist and a Bayesian became clearer to me but wherever it was, thank you.  I am looking forward to your next post on this topic.

I remember long ago when working on my PhD, I was using what was called "penalized likelihood" functions. This was just Bayesian stats in disguise, the "penalty" playing the role of a prior in Bayesian theory.