There’s been a lot of contradictory opinion in the press recently about future job loss from robotics and AI.  They range from Bill Gates’ hand wringing assertion that we should slow this down by taxing robots to Treasury Secretary Steve Mnuchin’s seemingly luddite observation “In terms of artificial intelligence taking over the jobs, I think we’re so far away from that that it’s not even on my radar screen.  I think it’s 50 or 100 more years.”

But these extreme end points of the conversation aren’t the worst of it.  There is essentially no effort in the popular press to differentiate ‘robot’ from ‘AI’.

AI enhanced robots are much in the press and much on the mind of data scientists.  So is it principally advances in deep learning (AI) that are the main cause of future job loss or robots as they currently exist?

Job loss, or more correctly task and skill redistribution due to automation has been going on at least since water wheels eliminated human labor in ancient civilizations.

Then there is John Maynard Keynes’s frequently cited prediction of widespread technological unemployment “due to our discovery of means of economising the use of labour outrunning the pace at which we can find new uses for labour” (1933).

What has not changed is that skills we learned in our youth may not be valued labor throughout our working life spans.  As this speeds up this creates risk for the employed.  In the last 20 or 30 years it has caused a redistribution of employment into higher-pay high-skill jobs and an emptying out of repetitive manufacturing tasks into largely lower paying services jobs.

Several recent academic studies have put the percentage of US jobs at risk from automation in the range of 35% to 45%.  Keep in mind that these projections are based on the jobs available in the economy based roughly on a 2010 base line and don’t take into account how new or existing workers or industries will adjust their employment needs in light of a fast changing environment.  Jobs available in 2010 may simply not be needed (automation or not) in 2020 so the percentages will necessarily be somewhat overstated. 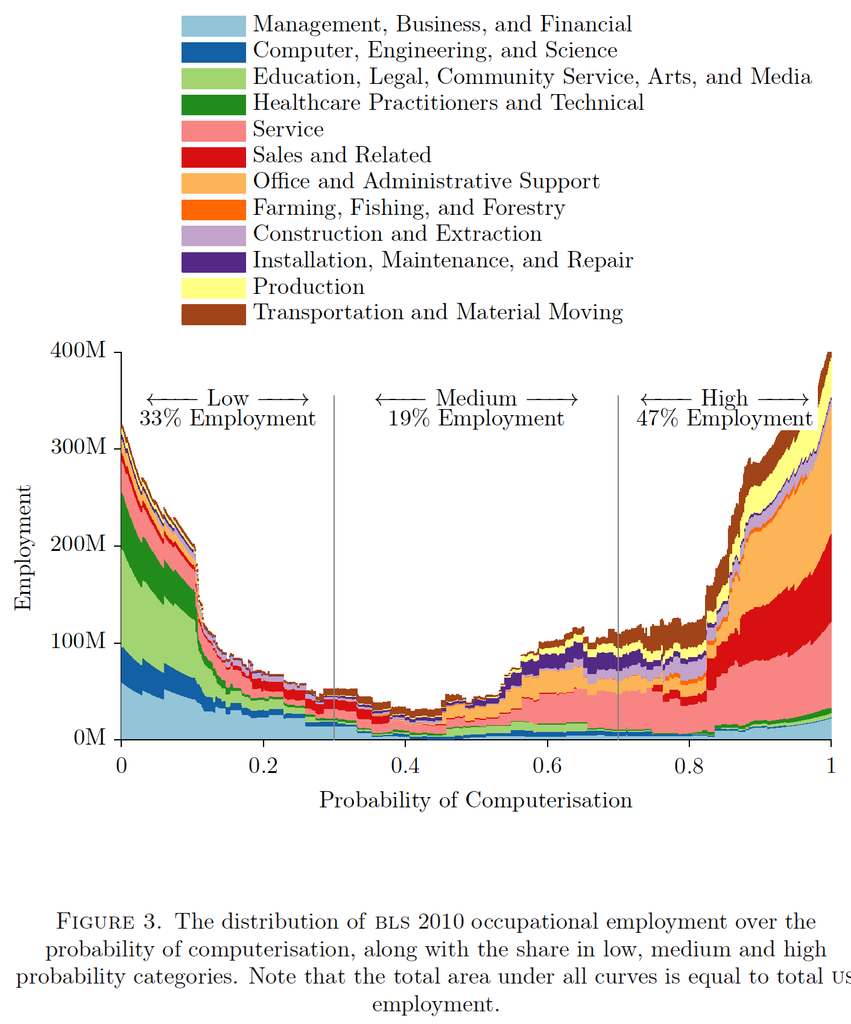 There are a number of ways to spot the vulnerable jobs and we discussed several techniques used by VCs in How to Put AI to Work.

Is the Cause Robotics, AI, or Both

The popular perception of robots is that they are getting smarter and much more capable fast.  Within data science we know that the hockey stick curve in capabilities we are currently experiencing is largely a function of deep learning techniques which are popularly grouped together as AI.

We also know that commercial applications of deep learning have been successfully adopted only since about 2015.  We pick that threshold date as the year when image classification by deep learning finally passed the human accuracy threshold (95% in the annual Image Net competition) and pretty much the same time that speech and text processing hit about 99% accuracy enabling the huge proliferation in chatbots.

Another candidate year might be 2011 marking IBM’s Watson victory on Jeopardy.  However, important as Watson is in AI it’s just beginning to gain commercial traction today.  Other deep learning technologies like reinforcement learning and generative adversarial neural nets are even further away from general commercial adoption.

The studies published about job loss speak in generalities about AI and ML but don’t attempt to show that adoption of AI enabled robots will accelerate job replacement.

It’s About the Robots – and they’re Not that Smart 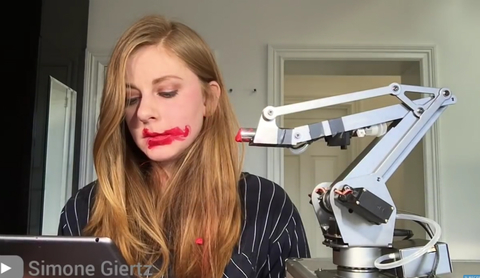 Robots have been taking human jobs for decades.  The earliest industrial robot was designed and installed by General Motors (GM) in 1961.  By 1968 robots were available with 12 joints and could lift a person.  By 1974 robots were sufficiently sophisticated that they could assemble an automotive water pump.  Although these operated without human intervention and could be reprogramed to do other tasks, their capabilities did not advance significantly for another 20 years.

One of the most interesting and apocryphal stories about robotics is about the all-in adoption of industrial robots by GM in the 80’s.  GM fully committed to creating a ‘lights-out’ factory, meaning one that would operate completely without humans.  GM’s experiment was a failure and the economic loss was considerable.  The reason, they got ahead of what robots could actually deliver.  Although robots could be programmed to place, weld, paint, and screw they could not yet adapt to the small variations in the positioning of the materials versus the on-assembly line car.  Fit and finish, and the resultant rework were not up to the standards of human workers.

What changed in the 90’s was the arrival of machine vision.  Not the sophisticated image processing that we have today, but the ability of the robot to take in camera signals and adjust the physical positioning of the item ever so slightly to create repeatably perfect alignment of parts.

The significance is that none of this rises to the level of data science.  The use of controls based on predictive analytics that allowed industrial robots to make more sophisticated decisions using multiple inputs to decide on multiple outputs did not become common until the 2000’s with early IoT.  Even so, the economic demand for this level of capability is only a small fraction of total industrial robots.

What has happened is that the cost of industrial robots has been decreasing about 10% a year so that between 1990 and 2004 the price of robots fell 75% and continues to fall today.  If you are repetitively placing 10 or 20 fasteners in a manufactured device it no longer makes economic sense to pay $17 to $25 per hour to an employee to do that.  Either use a low cost robot or outsource the labor to a country where that average manufacturing wage is $3/hour.

Job disruption is a function of the continued adoption of mostly dumb industrial robots and not AI or even predictive analytics.

Won’t AI enhanced robots make a difference in the future?  Yes they will.  However thinking about this requires splitting the question in several new ways.  The first split is over what we consider to be a robot.

Robots by definition must operate without human intervention and be reprogrammable to different tasks.  The most important requirement however is that they be able to perform human like tasks replacing the need for the human.

Robots have always meant physical entities like giant mechanical arms or Rosie the Robot from the Jetsons.  But increasingly robots that are virtual are also able to act in the world and replace humans.   Particularly these virtual robots rely on the capabilities of deep learning for their capability.

In the physical world, the AI enhancement of robots has mostly to do with mobile robotics.  Industrial robots are almost universally bolted to the floor.  Mobile robotics however have use in both wage-replacing and personal use applications.

Increasingly in this conversation we need to expand our thinking about robots particularly to include AI enhanced virtual robots.

The interesting thing about the examples above is that based on units deployed, far more AI enhanced robots, particularly in the virtual category are designed to enhance our personal lives by creating free time or leisure, and not to take our jobs.

We recently did a review of 30 ways in which Watson was being used by startups to create new applications.  Watson isn’t all of AI’s application to virtual robots but it’s interesting that 57% were aimed solely at consumers and those that could conceivably be used by business to reduce direct labor costs represented only 27%.

As entrepreneurs look at how to utilize AI enhanced virtual and physical robots they’ve approached these business opportunities with the classical mindset of identifying the pain points.  What are the things in our lives that compete for our time and make performing gainful labor more difficult: child care, elder care, health issues, home maintenance, commuting/driving, shopping, and more.  Automation of non-routine tasks is increasingly feasible with deep learning but these tasks are principally not industrial or wage driving.

It appears that the new phenomenon of AI enhanced robots will largely target making life easier and more time available.  There may be some applications where like current industrial robots they may automate human tasks and cause job displacement but it does not appear that AI enhancement will be an accelerator of this phenomenon.

We should also look at historic transitions.  For example,

The difference is that all of that is in the past, and most people don't understand that it happened.  But they see "robots" and "AI" impacting jobs today, or read that they will, and think it is something new and different.  The only difference is that different types of jobs are being impacted.

Is this a concern?  Of course, exactly as it always has been.  The question is how to we adapt to these new and improved tools to improve our own lot, and the lot of mankind, exactly as it has always been.  We should start with reality based education so that people understand what is changing, understand the basis of what will not change, and are equipped to react to changing situations.  Anything less dooms them to be buggy whip manufacturers.