But the scenarios change when we talk about non-English speaking nations. Japan is growing exponentially; Russia and China have a huge culture of programming, and IT companies are growing rapidly in these countries; and India, Southeast Asian countries (Singapore and Indonesia), and South Korea (Seoul) are other popular and growing markets. Often, the lower median salary is easier to stomach because of the lower cost of living.

What is important to understand that the definition of “best country” may not be categorical, and depends on a lot of people’s preferences. To keep things fair we decided to dig up data from some popular sources to identify the best countries to work in for software engineers.

We listed these countries in order of their Happiness index and technological advancement in the field of IT over the years.

To pick the top 10 countries to work as a software developer would be biased in more ways than one, but if we need to, then these make the cut:

Google Trends is a public web facility of Google Inc., based on Google Search, that shows how often a particular search term is entered relative to the total search volume across various regions of the world, and in various languages (Wikipedia).

The numbers in the table depict the popularity of one language over another, as searched on Google. A programming language with a higher number shows that the interest is higher as compared to other languages. This popularity could be due to academics, professional requirement, or interest which leads to various job opportunities.

As discussed, Java is fairly popular. Python is one of the most searched languages in Australia. C#, despite showing a high requirement in the job portal, is not really popular. Swedish people had been searching for Swift programming language more often than others. Ruby leads in Ireland. MatLab is a popular Google search term in almost all the listed nations, showing its relevance in academics.

The below graphs compares the popularity of programming languages in order of Java, Python, PHP, C#, JavaScript, C++, C, Objective-C, R, Swift, Angular JS, Ruby, Perl, Matlab in each country respectively. Which means Java and R are searched more often and in greater volume as compared to  Swift and Angular Js in Denmark.

Using country-specific search for the number of software engineers jobs listed on Indeed, we found data which matched our previous research on Top programming languages that will be popular in 2017.

While Java remained the favorite in all the top destinations. C, C++, and C# programmers are still in demand in these nations, making them “evergreen” programming languages and famous among software engineers and developers.

In the U.S., China, India, and Japan, PHP developers have quite sought after.

The requirement of R programmers is higher in Switzerland, USA, India, and much more so in Germany and France. Canada, Netherlands, UK, USA, India, and China clearly require MatLab skills. If you are a Ruby developer, Japan needs you. But Canada gives first preference to Perl coders. 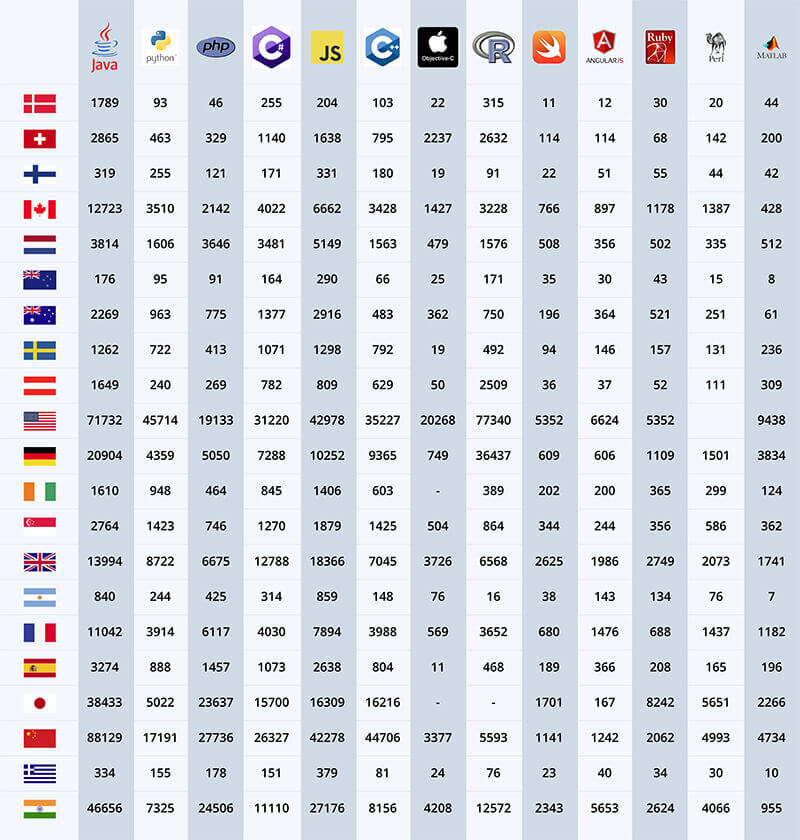 What’s happiness without a handsome salary?

Hence, we listed the average salary for a particular job (Source – PayScale). These values have been expressed in US dollars.

Switzerland, Sweden, Australia, and the United States have higher salaries than other countries.

A data scientist is one of the highest-paid jobs across the globe. Argentina pays PHP developers generously compared to the country’s average pay for other IT skills.

France is looking for Java and front-end developers, paying them well for their skills.

Japan, Singapore, and, particularly China and India, offer fairly poor compensation despite having a high requirement for skilled employees.

I understand that the quality of life, safety, cost of living, state taxes, commute cost, etc. are some of the other major factors to be considered when deciding the top work destinations for a developer. However, job listing, the popularity of the skill, median salary, and happiness index are equally important.