According to the IT programming trend, Java is currently more popular than other programming languages in terms of number of jobs, number of existing Java developers and overall usage statics in IT compared to Python. According to the latest usage statistics posted on a popular Technology Survey site, Java is being used by 3.0% websites as a server-side programming language, whereas only 0.2% of websites use Python. However, all the recent reports have highlighted that the usage and popularity of Python is growing drastically compared to Java where the Java usage is coming down year on year.

In the below table we could able to see that Java requirement is coming down year on year whereas Python requirement has grown from 200 in 2014 to 6500+ in 2017.

Job Posting Statistics shows python is the only Programming language consistently growing compared to Java which is going down drastically. 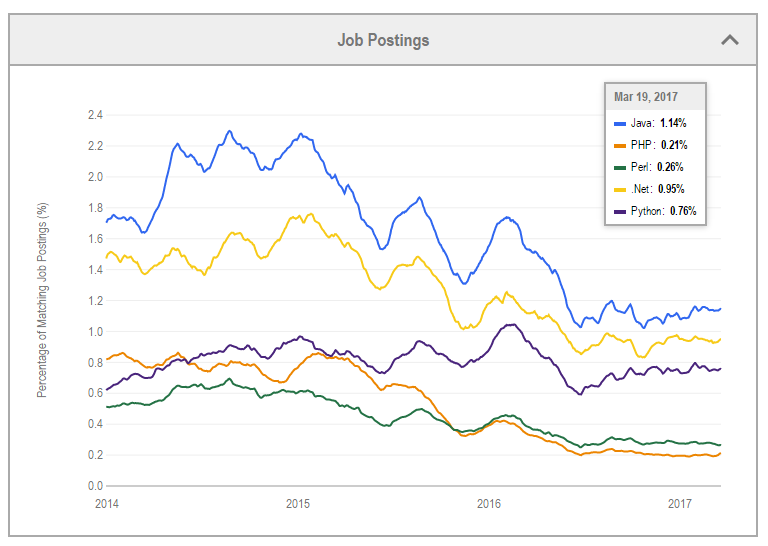 So it becomes essential for programmers to understand some of the major differences between these two popular programming languages.

Java requires developers to write longer lines of code to accomplish common programming tasks. They also have to put in additional time and effort to organize, maintain and update the Java code base. On the other hand, syntax of Python enables developers to express concepts without writing longer lines of code. It further emphasizes on reusable and readable code generation. Thus, it becomes easier for programmers to maintain and update the code base.

Both the languages have been updated on a regular basis. The programmers can use Java 8 to avail a number of new features including lambda expressions, a new date/time API and a new functional interface. They can further switch from version 7 to version 8 of the programming language without any hassle. But developers often find it daunting to choose between Python 2.x and Python 3.x. Both the versions are being maintained in parallel and hence switching from Python 2.x to Python 3.x is found to be challenging.

Java makes it easier for programmers to create portable cross-platform applications. These applications can run on any device on which Java virtual machine (JVM) is running. On the other hand, the developers have to use a Python compiler to convert the code written in Python into code understandable by the specific operating system. As JVM is installed on many devices, the developers can run Java applications on various devices without requiring any specialized tools and compilers.

The performance and speed of the two programming languages differ. Many programmers have proved that Java is faster than Python. While it cannot be used to accomplish CPU-intensive tasks, developers often have at their disposal, a number of options to enhance the execution speed of Python. They have to replace Python's default runtime with CPython, PyPy or Cython to increase the execution speed significantly. On the other hand, the performance of the Java application can be easily optimized without using any additional tools.

Along with being a popular web technology, Java is also used widely for developing apps for world's most popular mobile operating system, i.e., Android. The Android SDK includes a number of standard Java libraries. The developers can easily create Android apps by taking advantage of networking, data structure, graphics, and math libraries. They can even avail a number of tools and frameworks to speed up Android app development. But those into Python development know that it cannot be used for mobile app development directly and exclusively. The developers have to use additional frameworks and tools to use it for mobile app development. Many programmers prefer developing mobile apps with Java to save both time and effort.

The reason for Python  is becoming more popular and huge surge in number of requirement year on year is Python become a language of choice for all the current trending Technologies in IT. Python adopted as a language of choice for almost all the domain in IT including Web Development, Cloud Computing (AWS, OpenStack, VMware, Google Cloud, Oracle Cloud, etc.. ), Infrastructure Automation , Software Testing, Mobile Testing, Big Data and Hadoop, Data Science, etc. If the current trends continues Python will become the most sought after language and overtake the number of jobs requirement in next 2-3 years.

>  It further emphasizes on reusable and readable code generation. Thus, it becomes easier for programmers to maintain and update the code base.

Readable? Python? That's not exactly the word that comes to my mind to describe a language that uses *invisible* white spaces to delimit blocks, just hoping a guy in the team does not use tabs instead of spaces to indent.

Not to mention deployment nightmares...

Python replace Java? as a scripting language to quickly prototype stuff, sure. As a language to produce robust, portable and high-quality* application? not a chance...

Why not to use Python and Java in seamlessly integrated environment, i.e. Jython?  When it comes to Java+Python combination and data science, DMelt http://jwork.org/dmelt/ is a good example of how to use the Python language on top of Java VM, and using the full Java API.

Comment by Patrick Stingley on May 18, 2017 at 3:22pm
Python is a broken language. I love it. It's a lot more intuitive than Java, but having to completely rewrite 2.7 code to run on 3.x and ignore the half of the libraries that run on whatever the other version is, has made me revisit Java.

Java and JavaScript are better choices for the long term. They're better managed.