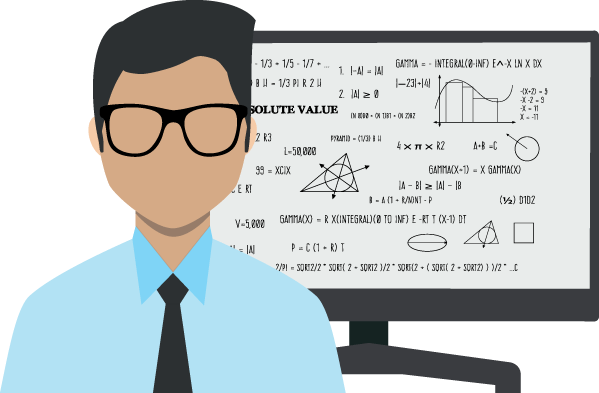 What a difference a few years can make.  We used to say that everyone loves a data scientist – and wants to be one.  That’s still true.  But as data science has increasingly been adopted by businesses at all levels, industries, and geographies the nature of the opportunities available to data science have also changed.

Yes it’s still one of the most interesting and rewarding career choices you can make.  I wouldn’t trade it for anything.  Where else can you create value out of previously unvalued data while basically predicting the future?  Of course I’m talking about what customers will do, what prices or values will be, or whether something is abnormal.  All the things we’re involved with on a day-to-day basis.

Still, as more of us find our way into business our roles become more specialized.  The days of data science unicorns are way behind us.  But that’s not to say that the more narrow focus we have in our new roles isn’t equally creative and challenging.

Fortunately every year about this time we get a nice quantitative look at our career field thanks to the good folks at Burtch Works Executive Recruiting.  For many years they have been giving us the benefit of their extensive knowledge of our job roles, skills, and salary levels thanks to their extensive relationship with several thousand data science job seekers.  It’s fascinating stuff and looking both directly at their results and reading a little between the lines we can get some really good insights.  The data we’ll share here comes from their most recent 2019 study.

Are There Enough Data Scientists to Go Around?

For a long time we’ve been talking about a shortage of data scientists.  That shortage looks like it’s coming to an end.  When there was a very distinct shortage just a few years ago companies had a hard time hanging on to their data scientists and annual salary increases could be in the double digits.  That’s no longer true.

Burtch Works reports year-over-year average salary increases for data scientists at all levels at between 0% and 4% with most groups coming in at 2%.  This chart is for ‘individual contributor’ data scientists with one to three years experience. 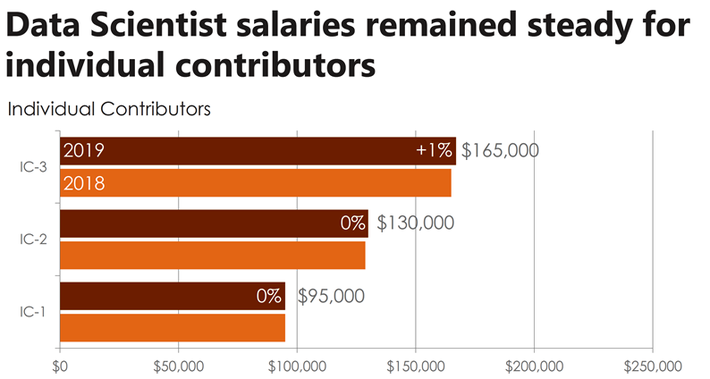 A 2% average annual increase over all categories, essentially the rate of inflation, strongly signals that employers don’t have to compete on wage increases to retain skilled data scientists.

Are There Too Many of Us?

The way I read the data is that supply is now in equilibrium with demand.  That is demand continues to increase as data science becomes both more widely and deeply embraced by business.  Since that level of adoption is somewhere in the range of 25% and 50% of companies and nowhere nearly deeply entrenched enough, the field will continue to expand for many years.

Incidentally, it seems that there are two different forces at work here.  The first is that we’ve been graduating more and more data scientists.  The second, which we’ve been commenting on for several years, is that our AI/ML tools now allow us to be much more efficient.  Automated Machine Learning (AML) or at very least much lower-code intensive platforms now allow a few data scientist to do the work of many.

Burtch Works makes an interesting distinction between ‘Predictive Analytic Professionals’ and ‘Data Scientists’.  Their position is that the folks who retain them to find these folks want two distinctly different skill sets.  To Burtch Works’ way of thinking it comes down almost entirely to what we know as deep learning and the ability to write code. 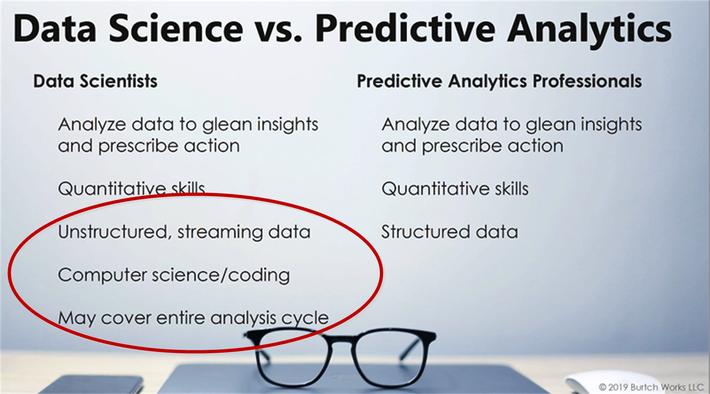 I’ve always had a problem with this simplistic dichotomy.  I expect you and I both know plenty of ‘Predictive Analytic Professionals’ who regularly work in unstructured data, write in Python, and are comfortable around text analytics, image processing, and computer vision.  Not that those projects are as common as machine learning modeling and segmentation.

Then there’s the problem that everyone wants to be a ‘data scientist’ and we’ve never really worked out what a junior and senior job title should be.

Where are the Opportunities

Setting these definitional quibbles aside, there’s something interesting in the Burtch Works data about which industries are utilizing each of these categories and it’s quite dramatic. 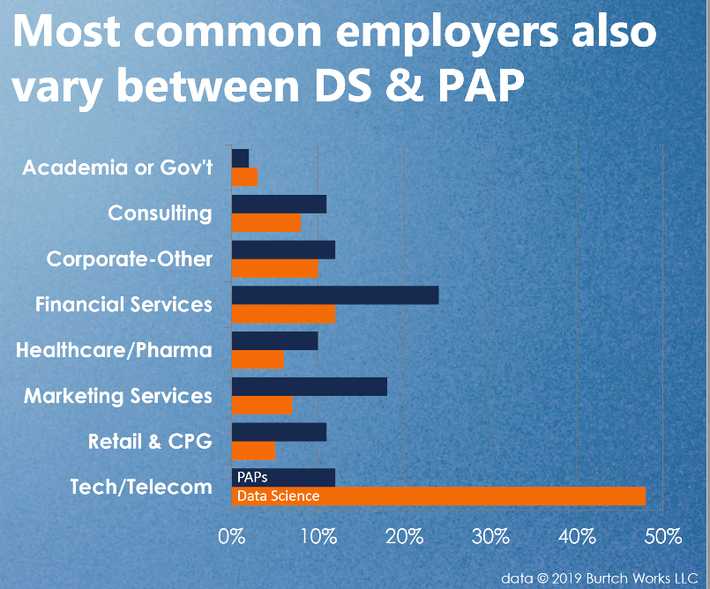 We used to associate data science with tech and Silicon Valley startups.  It’s no doubt true that innovations in the use of deep learning are still coming from there.  But predictive analytics is now a fairly mature set of techniques and increasingly we know how to exploit it across a variety of processes and industries to create value.

We recently argued that despite the hype around deep learning that most of those projects are still pretty high risk and high cost.  These are not the sort of projects that companies starting out on their digital journey should be undertaking.  So it comes as no surprise that outside of tech/telecom, predictive analytics is the more desired skill set.

If you’re doing some career planning you’d like to know how many of each of these jobs there are.  There is one hint at that in the Burtch Works data though I freely admit I’m torturing the data to reach this conclusion.

Since Burtch Works serves a wide variety of businesses and places both ‘data scientists’ and ‘predictive analytics professionals’ we might look to the ratio of these to estimate the prevalence of each type of job.  In their survey which comes from folks they have placed or at least tracked in their searches they analyzed 2,261 responses of which 1,840 were ‘predictive analytic professionals’ and 421 were ‘data scientists’.  That’s about 8 openings in predictive analytics for every 2 in their definition of data science.  Intuitively that feels about right to me.

And for what it’s worth, all you PAPs have my blessing to go right on calling yourselves data scientists while you create the lion’s share of the value in your industries.