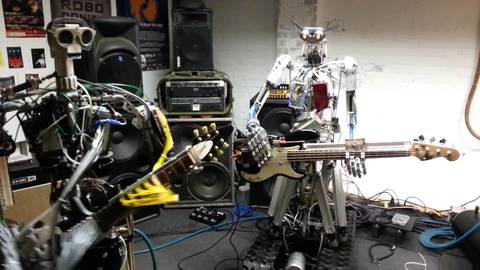 The project is an algorithmic composer based on machine learning using a second order Markov chain.

This code implements a recurrent neural network trained to generate classical music. The model, which uses LSTM layers and draws inspiration from convolutional neural networks, learns to predict which notes will be played at each time step of a musical piece.

The project builds a deep autoencoder and acoustically monitors the influence of the middle code layer using a Kork nanoKontroller2.

The code in this repository will allow one to

The project helps in generating sound using recurrent neural networks. The project has been summed in the blog post here.

The project contains code for statistics-driven music composition and machine learning. Further explanation can be found in the blog post here.

Writing rap lyrics requires both creativity, to construct a meaningful and an interesting story, and lyrical skills, to produce complex rhyme patterns, which are the cornerstone of a good flow. This paper presents a method for capturing both of these aspects. Approach is based on two machine-learning techniques: the RankSVM algorithm, and a deep neural network model with a novel structure.