It is always hard to find a proper model to forecast time series data. One of the reasons is that models that use time-series data often expose to serial correlation. In this article, we will compare k nearest neighbor (KNN) regression which is a supervised machine learning method, with a more classical and stochastic process, autoregressive integrated moving average (ARIMA).

We will use the monthly prices of refined gold futures(XAUTRY) for one gram in Turkish Lira traded on BIST(Istanbul Stock Exchange) for forecasting. We created the data frame starting from 2013. You can download the relevant excel file from here.

We are going to use tsfknn package which can be used to forecast time series in R programming language. KNN regression process consists of instance, features, and targets components. Below is an example to understand the components and the process.

This instance is used as a reference vector to find features that are the closest vectors to that instance. The relevant distance metric is calculated by the Euclidean formula as shown below:

denotes the instance and

indicates the features that are ranked in order by the distance metric. The k parameter determines the number of k closest features vectors which are called k nearest neighbors.

As you can see from the above plotting, features or targets might overlap the instance. This is because the time series data has no seasonality and is in a specific uptrend. This process we mentioned so far is called MIMO(multiple-input-multiple-output) strategy that is a forecasting method used as a default with KNN.

Before we mention the model, we first analyze the time series data on whether there is seasonality. The decomposition analysis is used to calculate the strength of seasonality which is described as shown below:

The stl function is a decomposing time series method. STL is short for seasonal and trend decomposition using loess, which loess is a method for estimating nonlinear relationships. The t.window(trend window) is the number of consecutive observations to be used for estimating the trend and should be odd numbers. The s.window(seasonal window) is the number of consecutive years to estimate each value in the seasonal component, and in this example, is set to 'periodic' to be the same for all years. The robust parameter is set to 'TRUE' which means that the outliers won't affect the estimations of trend and seasonal components.

When we examine the results from the above code chunk, it is seen that there is a strong uptrend with 0.99, weak seasonality strength with 0.26, because that any value less than 0.4 is accepted as a negligible seasonal effect. Because of that, we will prefer the non-seasonal ARIMA model.

This model consists of differencing with autoregression and moving average. Let's explain each part of the model.

Differencing: First of all, we have to explain stationary data. If data doesn't contain information pattern like trend or seasonality in other words is white noise that data is stationary. White noise time series has no autocorrelation at all.

Differencing is a simple arithmetic operation that extracts the difference between two consecutive observations to make that data stationary.

is the differenced data and we must remember it may have been first and second order. The explanatory variables are both lagged values of

Before we model the data, first we split the data as train and test to calculate accuracy for the ARIMA model.

As seen above code chunk, stepwise=FALSE, approximation=FALSE parameters are used to amplify the searching for all possible model options. The drift component indicates the constant c which is the average change in the historical data. From the results above, we can see that there is no autoregressive part of the model, but a second-order moving average with the first differencing.

Forecasting and accuracy comparison between the models

For forecasting accuracy, we take the results of the test set shown above. 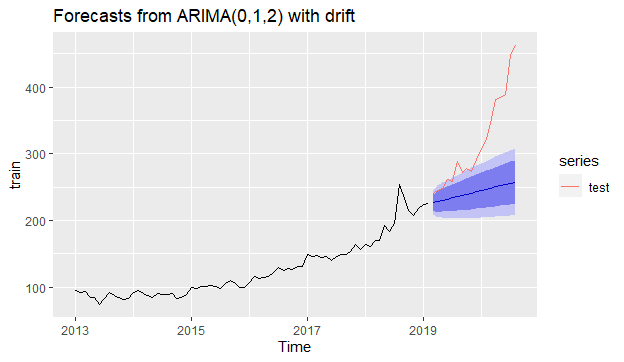 The rolling_origin function is used to evaluate the accuracy based on rolling origin. The rolling parameter should be set to FALSE which makes the last 18 observations as the test set and the remaining as the training set; just like we did for ARIMA modeling before. The test set would not be a constant vector if we had set the rolling parameter to its default value of TRUE. Below, there is an example for h=6 that rolling_origin parameter set to TRUE. You can see the test set dynamically changed from 6 to 1 and they eventually build as a matrix, not a constant vector. 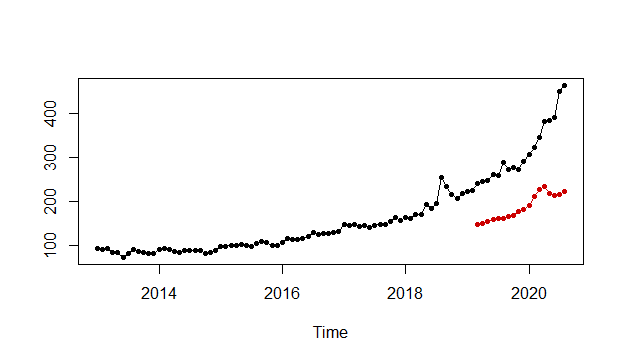 When we compare the results of the accuracy measurements like RMSE or MAPE, we can easily see that the ARIMA model is much better than the KNN model for our non-seasonal time series data.

The original article is here.