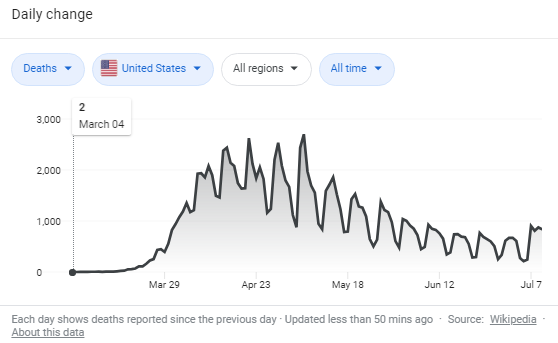 Even some data scientists claim that I was very lucky to have recovered, and that I may get re-infected again. No, I was not lucky by any mean. Based on my estimates, and not having severe health conditions, it was perfectly expected (with a probability of 99.8%) that I would recover. It was also expected with a probability of (99.8%)^4 = 99.2%, that all the four members of my family would recover or get no symptom / no infection. My case was 2+ months long, yet mild. Difficulty breathing (one of the many symptoms) was similar to that caused by wearing a mask or breathing smokey air after a big wild fire. Yet so many people think it is black or white: you either get almost nothing, or you get a terrible experience with long-term damage or death. Yet, I don't belong to any of these categories, and my case is likely to be typical if you are among those having symptoms for 2+ months, and no severe health condition. But cases like mine are never featured in the news, especially since it did not even require a visit to the doctor. Recovery is full. And it makes perfect sense. For instance if you look at car accidents, the number breakdown (percentage-wise) between those who die, those with permanent damage, those with a 3-month problem who eventually fully recover, those with little issues, and those unhurt, is likely to be similar.

Many also claim that you only get a few weeks of immunity once recovered. This is not based on any data. The only case I know well is mine (thus anecdotal, but one of the few that is 4-month old) and I haven't caught the virus a second time (none of my family did), or if I did, it was so mild I did not even notice. True, it is more difficult now to get re-infected even if you try hard. But most likely, many people will get between 6 months to many years of immunity. We'll see in a year if my predictions are correct. And if immunity lasts only for 3 weeks for most people, no vaccine will ever work.

I think it’s dangerous to down play the virus based on your personal experience. There are many people who “assume” they have no severe health conditions yet could die. For example a person with Factor V Leiden (a common gene mutation) would most likely not even know they have it and would be more susceptible to blood clots. Facto V Leiden

This virus has been found to cause micro clots. Covid and Blood clots How many people died at home with mild symptoms and Died due to a blood clot and were not tested for Covid19?

In the future we will see what the real epidemiological outcome really was based on closed cases. For now I think we should all be careful, stay home, and wear masks.

@James: The problem is that most people don't even need to get tested or go to the doctor (like myself), 99.9% in that category have a positive outcome but appear nowhere in the statistics. This makes the numbers much worse than they really are, probably by a factor 10.

One of what I consider the inaccuracies of this is calculating the survival percentages based on numbers of infected.  That is inaccurate.  The rate should be calculated based on only folks who have had an outcome, either positive like yourself and your family, or negative.  So deaths/(deaths + survivors).  That makes the death rate for the US more like 8-8.5 percent..