The VC's Guide to Machine Learning 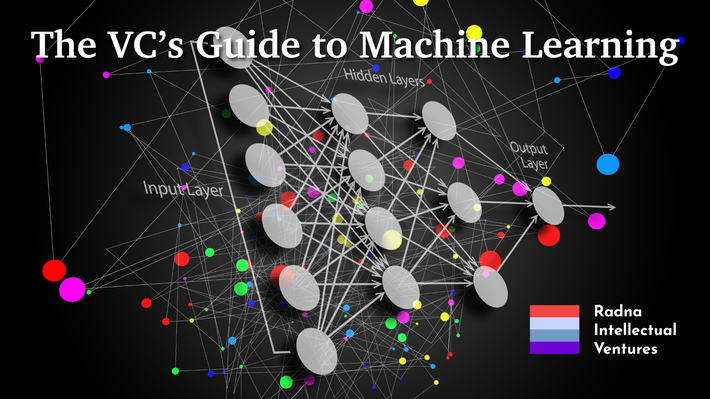 “Artificial Intelligence began with an ancient wish to forge the Gods."

In the singular words of Pamela McCorduck, Artificial Intelligence or AI stems from our desire to "forge the Gods", a concept that has been around for thousands of years.

In the Greek mythology of "The Argonauts and the Quest for the Golden Fleece", Jason – a mortal hero and leader of the Argonauts – searches for the "Golden Fleece" and along his arduous journey battles Talos—a gargantuan non-human made of solid bronze.

With the exponential adoption of intelligent voice assistants like Amazon's Alexa and Apple's Siri, it appears that AI is a fundamental part of human nature to expand beyond ourselves, an innate quality of humanity's desire to be Boundless.

With this ancient human dream for both understanding and creating intelligence, let us dive into the wonderful world of Machine Learning or ML.

How we interpret and understand the world as human beings largely depend on our representation of reality (popularized as "mental models" by Charlie Munger).

As the complicated and nonsensical trajectories of the Geocentric or "Earth-center" model clearly shows above, having the correct representation (the Heliocentric or "Sun-center" model) makes a world of difference.

If you truly understand this (with the preface that knowledge is distinct from understanding), all of the technical jargon and lengthy pitches by technical Founders may start making sense.

Today, I would like to highlight key achievements from decades of Machine Learning Research, and how we can apply this understanding to make superior investment decisions for early-stage investing in Machine Learning startup companies.

Disclaimer: even with the current state-of-the-art Deep Learning algorithms, Machine Learning is still in its infancy and really most suitable just for Text, Vision, and Voice applications. This simple 3-Theme Framework will prove invaluable even as you explore the most cutting-edge Machine Learning technologies as it will steer you clear of investment opportunities that are really empty promises like the fraudulent Unicorn Theranos.

We all know and love Google Translate, the website that can instantly translate between 100+ different human languages as if by magic.

What is the technology behind Google Translate? 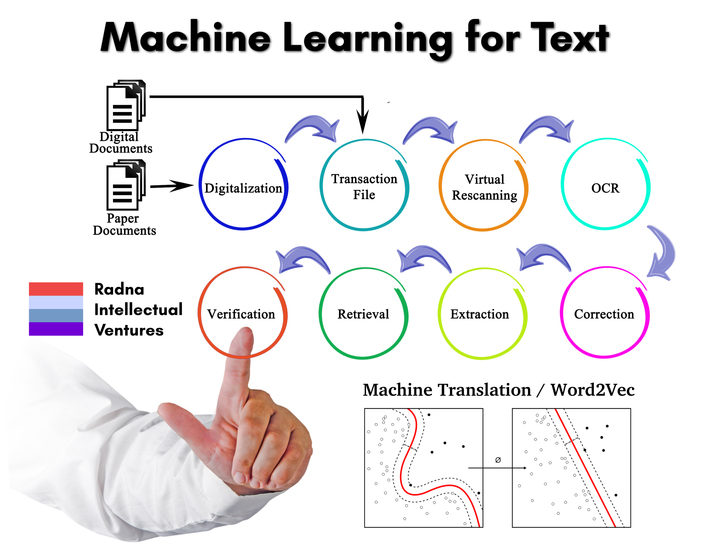 Without getting into the technical details, the key idea that has made Google Translate possible and the hundreds of other applications for many "AI-powered" Text and Language startups is Recurrent Neural Networks or RNNs.

Simply stated, RNNs are simplified computer models of the basic building blocks of the human brain—neurons.

What makes RNNs smarter (the "recurrent" part) than other "neural networks" is that they continuously improve upon their internal models based on external feedback.

This is analogous to how a child learns to walk for the first time - the motor neurons work closely with the neurons in the pre-frontal cortex to sense and learn base on feedback.

Moving on to Vision, we all have heard about Google's Waymo, General Motors' Cruise, and even Uber's own efforts in autonomous / self-driving cars.

What is the key technology behind this revolutionary industry? Although there are many moving parts (Lidar, GPS, IMU) to any self-driving technology package like Waymo, arguably a central component is the Vision technology.

You shouldn't be surprised to learn that state-of-the-art Computer Vision technology relies heavily on Machine Learning, and specifically a type of "neural network" called Convolutional Neural Networks or CNNs.

Think of them as "spatially invariant" neural networks.

What does that mean?

Spatial invariance is a simple idea that an object's identity doesn't change because of its position in an image or video.

With the latest CNNs being a ground-breaking "semantic segmentation" called Gated Shape CNNs – we are able to achieve Pixel-level classification of road obstacles.

Aside: the underlying self-driving tech, including any ML Vision algorithm, simply provide the foundation for solving a higher-level problem known as SLAM or simultaneous localization and mapping, the problem being an agent's ability to simultaneously construct a map of its unknown environment while still keeping track of its location within it.

Transformers – not to be confused with the immense intergalactic robots from the American science fiction action films – are the technology behind Natural Language Processing, the heart of everything from Amazon's Alexa and Apple's Siri. Transformers are a type of Deep Learning architecture first introduced in 2017 that has exponentially advanced the field of Natural Language Processing or NLP.

Within getting into the technical details, Transformers consist of a novel computer architecture consisting of a set of "Encoders" chained together with a set of "Decoders."

Think of them as a very clever, higher-level systems architecture of the recurrent neural networks we mentioned above.

Amusing tidbit: Google launched a Transformer project call BERT – named after the Muppet character from Sesame Street – that has been trained with huge amounts of voice data and a core piece of the technology behind many Voice-enabled startups.

Now that you understand the three key applications of Machine Learning, let's apply this knowledge to early-stage venture capital investing.

Below we map these Machine Learning Themes to Representative Startups. 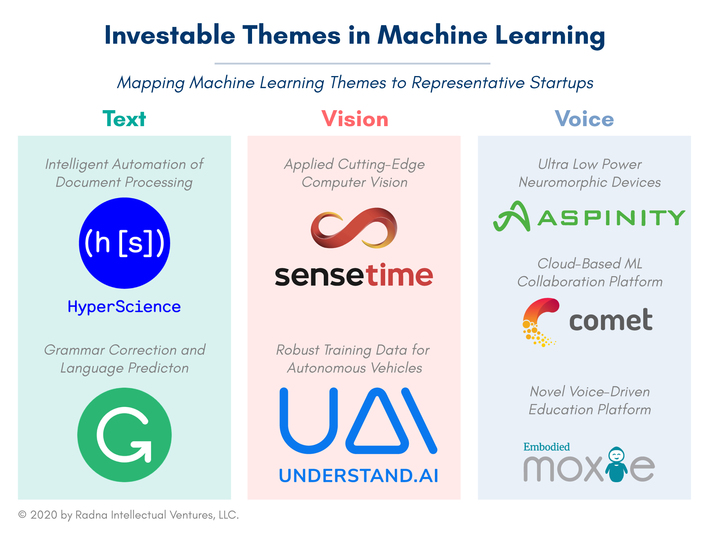 Of course, you should realize this is not a rigid mapping as there will be companies whose products and services may span and intersect any one or all of these investable themes.

For example, consider a Teleoperated Robot-Assisted Surgeon, which would allow a surgeon to operate remotely for a Human-in-the-Loop type of system.

Amid the COVID-19 pandemic, such an AI system may be an attractive investment for say New York-Presbyterian Hospital / Weill Cornell Medicine – the largest hospital system in the U.S. with over 2,000 hospital beds – with its own corporate venture arm NYP Ventures. 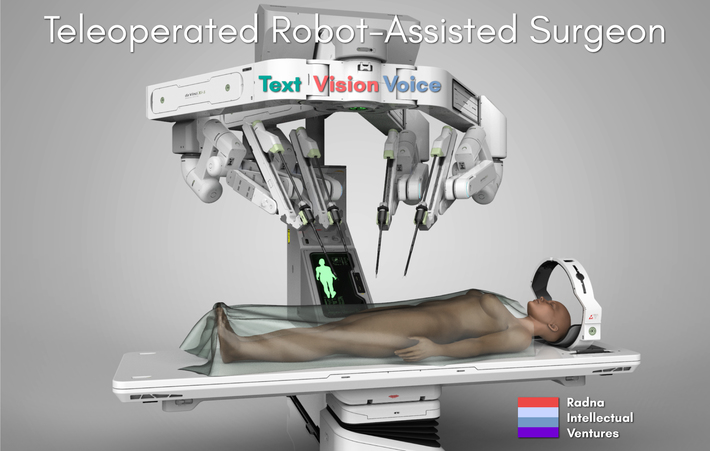 Using Vision ML algorithms to identify vital organs and blood vessels, such an AI system may leverage Voice ML algorithms to translate the human surgeon's instructions to onsite medical assistants who may be in a different country speaking a different language, which may require Text ML algorithms for real-time language translations.

Okay, I am sold on Machine Learning and ready to write some term sheets.

Let's take a step back first.

With so many failing Tech companies like Magic Leap claiming they use Machine Learning, it’s probably best if you first read up on my list of Red Flags from the hundreds of meetings and pitches I have personally been involved in for AI/ML startups.

Armed with the understanding of the realistic applications of Machine Learning and the practical investable themes (Text, Vision, and Voice), you're now ready to evaluate the mountain of Tech startups that are claiming they're "AI / ML-enabled."

My approach to deal screening is a technique borrowed from Greek Stoicism.

By subtracting what we don't know from something, we can actually progress much faster to gaining a true understanding of what that something claims itself to be.

Let's apply that to Venture Capital deal screening of startups in Machine Learning. 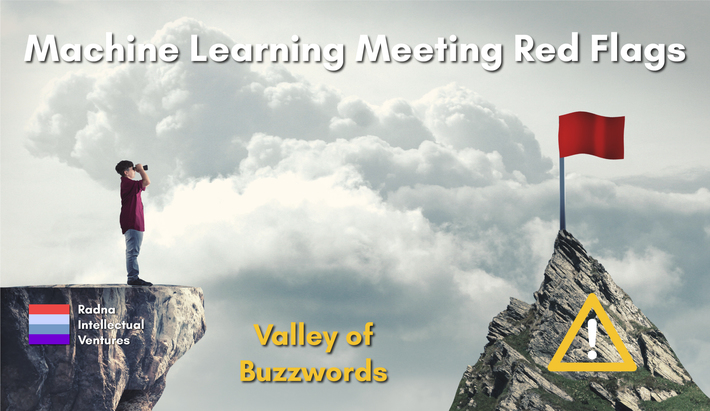 Here are my Red Flags during your meetings with Founders.

Assuming Strong AI is true – and this is still a questionable assumption – what is the path towards mankind's ancient dream to create intelligence?

Several seminal ideas in deep learning are based on building on the architectures of the neural networks we described above, including Generative Adversarial Networks (GANs), Long Short-Term Memory Networks (LTSM), and in general ideas of attention, transfer learning, meta-learning, and the paradigm shift from supervised learning to self-play.

For example, the most seminal achievement in Machine Learning occurred when an AI agent called AlphaGo defeated the top-ranked human player in Go (Lee Sedol) after just three days of teaching itself a game that is exponentially more difficult to master than chess. 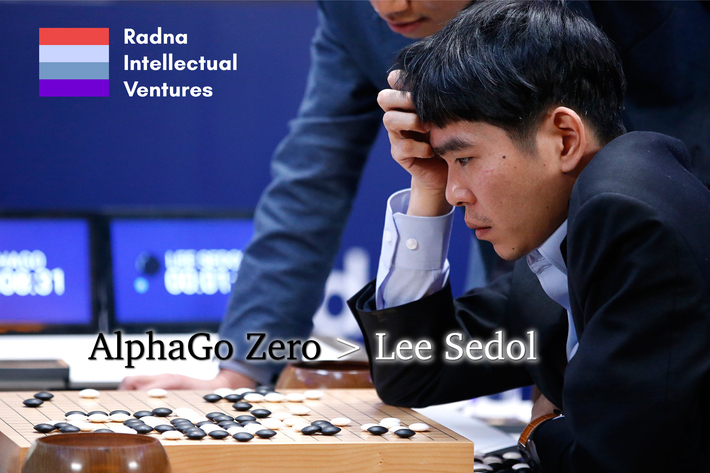 Source: Associated Press; Lee Sedol was defeated in 2016 by AlphaGo, an AI agent created by Google's DeepMind, and upgraded to a self-play version known as AlphaGo Zero.

So the future of Machine Learning will be unsupervised learning where an AI agent will teach itself the ability to build and improve its own architecture and I'd argue, not based on any reward function defined by humans – the AI agent will, in the course of self-learning, implicitly optimize a reward function removed of any human bias.

Returning to the original quote from Pamela McCorduck. 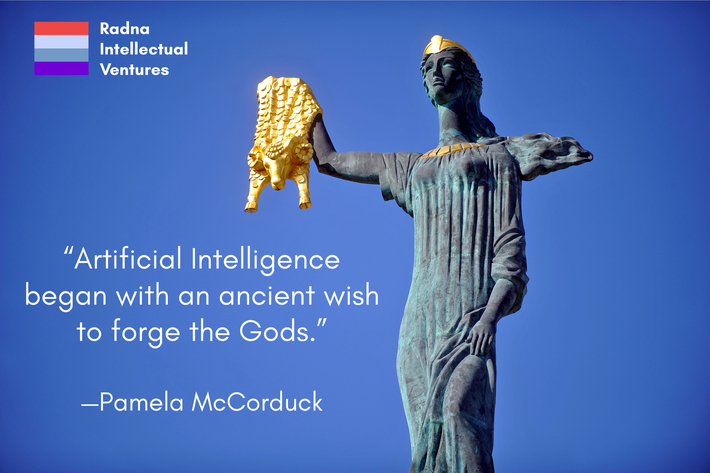 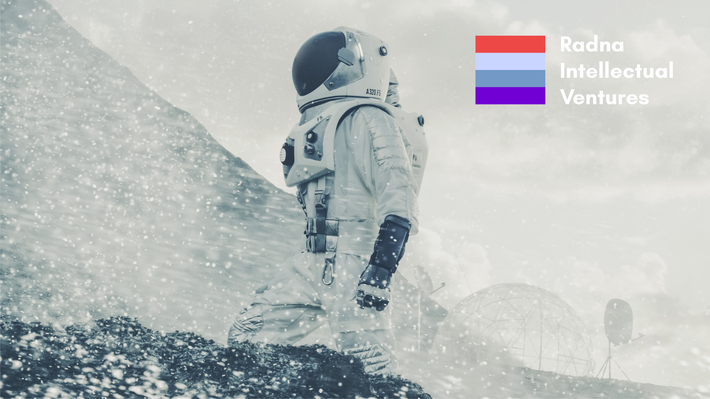