The Theory of Theory

Since I am sometimes asked to explain phenomena in the absence of data, it becomes necessary to determine what data is required to explain phenomena.  Some would say the best approach is to develop and test a hypothesis - to start filling a void of space with pinholes of light - until there are enough lit pinholes to provide a working theory.  This is not to say that a few additional pinholes later the theory might not change.  This is an effective and methodic approach if an organization has limitless resources including time.  If I staggered from one hypothesis to the next, I am unlikely to impress anybody.  “Well, you must use your skills and abilities to arrive at the most plausible hypotheses,” somebody might suggest.  It is important to recognize that science in order to be effective hinges on this hazy prelude or preamble.  In a manner of speaking, it is illogical to think that data science is about testing hypotheses, which is hardly all that complicated.  Data science “should” actually be about all the complicated stuff that occurs prior to the testing of hypotheses - the arduous intellectual trek leading to the commencement of testing.

Again then, let us say that I am asked to explain phenomena, and I need to ascertain the data to collect.  It should be apparent that the nature of my explanation to some extent influences the data that I must gather.  What does it mean to gather data?  The analyst surveys some clients or canvases the system?  Gathering data actually means recognizing what data is relevant.  This recognition brings about the existence of the data.  Methodologies are created to bring about recognition.  Data-gathering is an ontological process whereby data emerges from the constructs that are applied for its recognition.  It can therefore be said that the need to explain phenomena gives rise to a conceptualization of how to interpret reality.  Or perhaps in graduate school, some might suggest that epistemology necessitate an ontological construct.  Or maybe I would be the only person to suggest this - so hard to say at this point.

In many workplaces, there is a popular preconception that looking really busy and perhaps incapacitated means that a person is contributing hard to the company.  A number of years ago, I made my work environment totally paperless.  Everything I do I started to do on my computer.  I therefore appear to be the least busy person in the workplace all the time.  Yet I found that this change brought about initiatives among my peers to make other aspects of operations paperless:  they began questioning the need to print, sort, and store documents that already existed electronically.  The old paper regime, apart from requiring paper, also needed the following: printers, space for the printers, tables for the printers, service contracts for the printers, toner cartridges, cabinets for the cartridges, paperclips, staples, folders, boxes, storage space for the boxes, insurance to pay for the space, lighting for the space, and periodic sweeping of the space.  The people in the habit of “looking busy” require a tremendous amount of overhead to fuel the appearance of business.

On the other hands, when I evaluate the work that people do, I completely ignore their appearances.  I go strictly by the numbers.  I hardly interact with them face-to-face.  I am therefore most interested in what they do.  I am always fascinated by those that appear to be busy but whose numbers might not say so.  This is not to say that I myself want them to appear busy.  I don’t manage employees.  I just don’t want their metrics adulterated or maligned.  At the same time, if their metrics were adulterated or maligned, I consider this an invitation to delve deeper into the numbers to discover how and why.  I am big on algorithms, but I cannot use any of mine at work.  Essentially I make great use of more conventional and traditional applications.  Then I am asked to explain phenomena.  It is important to recognize that problematic phenomena exist within a particular setting because that setting does not prevent the phenomena from occurring. 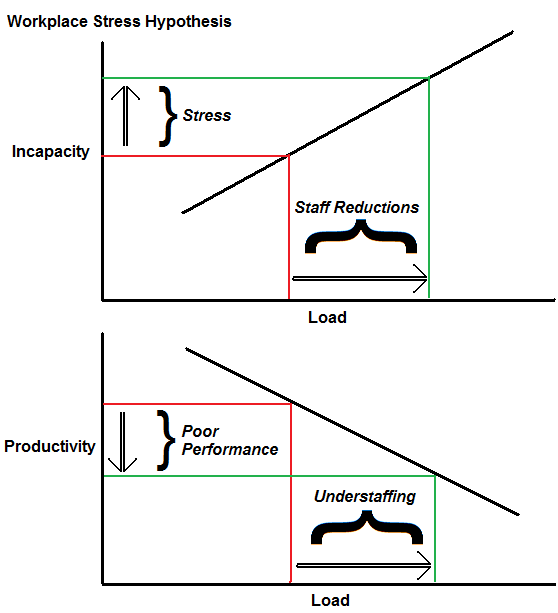 Whether my employer realizes it or not, I have a little bit of a political agenda.  The charts above form the basis for many of my ideas.  In short, the more work people are given, the less productive they are, and the more incapacitated they become.  (Productivity shouldn’t be confused with production.)  I habitually attempt to find evidence for aspects of the above in the work that people do.  These charts mean among other things, if workers seem less productive than usual, I check for structural evidence of incapacity or impairment.  If I cannot find incapacity on the outside, this leads me to the murky waters of incapacity on the inside.  I recognize that my place for analysis involves things outside and interacting with the worker - things that I can observe and therefore take into account.  Since I am not a psychologist by profession, I prefer not to speculate on personal matters such as depression and burnout.  It is not that my opinion would necessarily be unqualified in light of my graduate studies; it is simply not my role to make such assessments.

I started thinking that I have to come up with a theory on how to come up with a theory.  No, that cannot be, I thought to myself . . . How can everything hinge on a circular?  “If only my coworkers would stick to the model.  The correlation is good as things stand.  They had to mess up the game plan.”  Oh well.  Then it occurred to me that it is actually better for the correlation to change over time and perhaps used as a benchmark.  I could then study its persistence and seasonality.  A real data scientist wants to keep track of and study more phenomena not less.  I should be thankful having more things to write about rather than fewer.  Why not start taking into account major events that can affect workers on a personal level - if those events also affect their productivity?  I am not statistician or an accountant after all.  My graduate research was on social disablement.  I fall under the heading of social scientist.

I decided that the first step down this and any other road is to make a place for the findings - a secure and safe place for it to sit inside me.  What I discover will depend to some extent on what I allow myself to perceive.  Any hypothesis that I decide to test is in a way “predestined” - premised on the paths that I take to lead me to my hypothesis.  If my journey in the workplace does not take into account the lived experiences of people, I will have nothing to analyze pertaining to these narratives.  How I choose to carry myself and be the person that I wish to be will affect the data that becomes available and how I go about analyzing it.  Truth is in the character of a person.  The task of building a better workplace really begins with me becoming the best person that I can be.  Character is the foundation for the reality that I present in my work; it determines the scope of my analysis.