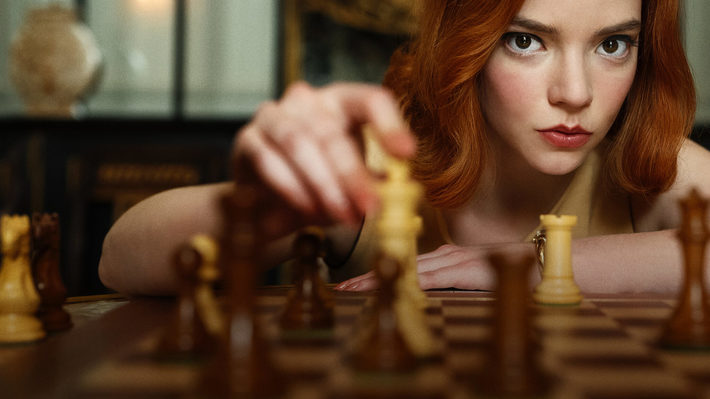 With over 62 Million viewers, ‘The Queen’s Gambit’ is currently the #1 show on Netflix. The popularity of the miniseries based on Walter Tevis’s novel has even fueled the sales for chess sets across the globe. Directed by Scott Frank, the universally popular series tells the story of Beth Harmon – a fictitious chess prodigy who beats all odds in life from being orphaned as a child, to battling drug addiction to finally become a grand chess master. If you have not seen the series as yet, you can watch the trailer here.

Audiences around the world have been captivated by the way Beth learns to play and master the game, defeating powerful well-ranked chess players to ultimately become the best female chess player in the world. Even as she laid in bed at night, Beth mentally plays the game by visualizing the chessboard on the ceiling, exploring all possible outcomes, and evaluating the best moves to defeat her opponents. By exploring and learning new scenarios, she updates her game strategy becoming more undefeatable with each new move she learns. Much like artificial intelligence systems.

Unlike Beth who feeds on copious amounts of green tranquilizer pills to fuel her psychosis-induced visualizations for the game, modern computer programs rely on machine learning algorithms to explore all possible paths of the game and train to outperform their human opponents. Some systems are also fed with data sets scraped from various chess websites, and even information from chess commentaries to master the game.

Our fascination with chess and intelligence is not new. AI researchers have been trying to build the virtual bot version of Beth since long time. Deep Blue, a chess-playing system developed by IBM was the first computer ever to beat our reigning champion in chess in 1997. There have been numerous experiments involving AI and chess in our quest to explore the possibilities of human-machine interactions. Researchers have developed systems that can beat our best players not just at chess but also strategic games such as Go, Poker, and Dota 2.

If you are also a big fan of Harmon like us and want to play a match with the bot version of Harmon, you can try one of the many chess bots out there like this one: https://www.chess.com/news/view/play-beth-harmon

In the series, Harmon’s only feared opponent is the Russian-based player – Borgov. Trained at the game like a machine since childhood, Borgov shows no emotions and makes no errors during his game. The closest real-world equivalent of Borgov would be AlphaZero – An actual machine that has no emotions, that is powered by artificial intelligence, and is designed to win any and every game. Even Harmon loses to Borgov in her first match against him.

It is easy to assume that you can just build your own AlphaZero or chess-playing AI system from scratch to win all the chess matches against humans. Can AI really deliver those high-quality chess moves like the smartest players on the planet?

AI versus humans: Are the machines smarter than us?

Chess is one of the oldest and most intellectual games known to mankind. Just like Music, the game requires players to demonstrate creativity and ingenuity. It pushes our problem-solving skills to the extreme. Humans have been playing and training chess for over 1500 years.

What took us 1500 years to master, took Google’s self-learning AI algorithm – AlphaZero just 4 hours to learn and defeat our best chess player. There is no doubt that AI can learn patterns much faster and in a more efficient manner than any human. However, the strong point of the program is still its ability to defend itself based on the move of the opponent. It evaluates possibilities based on the opponent’s move, looking for weak points. In short, it is as smart as the data or information that is fed into it. While this proves that when optimized with the right information; AI really wins, it does not answer if it can replace human intelligence.

Be it life or chess, humans are known for their ability to change, adapt, and improve. Can AI be as intuitive and creative as us someday? We will have to wait to find out. One thing is for sure though, with smarter machines and technology around, we will continue to explore all possibilities that are open to us much like Beth staring at the chessboard on her ceiling. Like her, we are always looking for answers to problems no matter how complex they are.

“Every chess master was once a beginner” – Irving Chernev

The article is originally published at CrunchMetrics.