The Concept of Datafication; Definition & Examples

This article was written by Margarita Shilova.

Datafication is a buzzword of the last several years, that is used actively along Big Data industry. Honestly, if you would search the term ‘datafication’ on the internet you probably won’t find that much relative information about it, yet it is a word we are hearing a lot these days. However, after analyzing the topic itself, I could say that many of us understand the meaning of the term, but probably named it another way.

Datafication, according to MayerSchoenberger and Cukier is the transformation of social action into online quantified data, thus allowing for real-time tracking and predictive analysis. Simply said, it is about taking previously invisible process/activity and turning it into data, that can be monitored, tracked, analysed and optimised. Latest technologies we use have enabled lots of new ways of ‘datify’ our daily and basic activities. 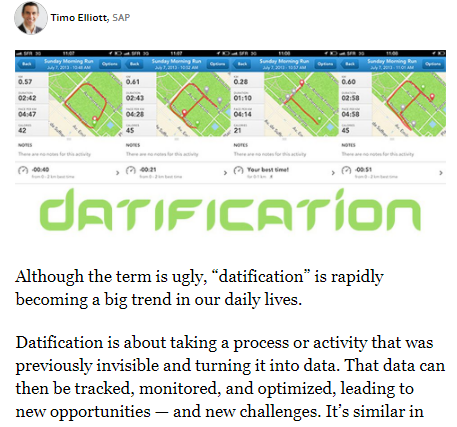 Summarizing, datafication is a technological trend turning many aspects of our lives into computerized data using processes to transform organizations into data-driven enterprises by converting this information into new forms of value.

Datafication refers to the fact that daily interactions of living things can be rendered into a data format and put to social use.

And here could be many examples of datification.

Let’s say social platforms, Facebook or Instagram, for example, collect and monitor data information of our friendships to market products and services to us and surveillance services to agencies which in turn changes our behaviour; promotions that we daily see on the socials are also the result of the monitored data. In this model, data is used to redefine how content is created by datafication being used to inform content rather than recommendation systems.

However, there are other industries where datafication process is actively used:

Netflix, an internet streaming media provider, is a bright example of datafication process. It provides services in more than 40 countries and 33 million streaming members. Originally, operations were more physical in nature with its core business in mail order-based disc rental (DVD and Blu-ray). Simply said, the operating model was that the subscriber creates and maintains the queue (an ordered list) of media content that they want to rent (for example, a movie). If you limit the total number of disks, the contents can be stored for a long time, as the subscriber wishes. However, to rent a new disk, the subscriber sends the previous one back to Netflix, which then forwards the next available disk to the subscribers queue. Thus, the business goal of the disk rental model is to help people fill their turn. The model has changed and now Netflix is actively transforming their service into a smart one, actively using datafication processes.